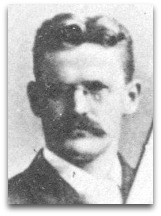 In hmolscience, William Patten (1861-1932) was an American zoologist and biologist noted for his late 1919 address “The Message of the Biologist”, given to the American Association for the Advancement of Science, and followup 1920 book The Grand Strategy of Evolution: the Social Philosophy of a Biologist, in both of which he utilizes chemistry theory, mixed with evolution theory, mixed with biology, to outline a philosophy of society. Patten outlines a view that each person is a "Mr Molecule" of a chemical society. The following is a representative excerpt from the Patten's message:

“The most familiar attempts to explain how evolution takes place are restricted to special aspects of evolution, and are often epitomized in personal names, such as Darwinism, Lamarkism, Weismannism, Mendelism. Among us there are naturalists, morphologists, physiologists, and psychologists; breeders, experimentalists, and bio-chemists. And surrounding us on all sides are the physicists, chemists, geologists, and astronomers, with whom we must reckon, for their domains and their subject matter overlap ours in countless ways. But unfortunately between all these workers there is little common understanding and much petty criticism.”

Message of the Biologist
In his 1919 address “The Message of the Biologist”, Patten attempted to outline how the modern person might go about deriving a science-based system of morality and future governing constitution for a ‘molecular society’, of people considered as ‘human social atoms’ (social atoms) or ‘human molecules’, based on the pure science teachings of chemistry, physics, and astronomy. [1]

“We may say, for example, that when the right chemical elements are in the right relations to one another, or if they are moved into them, or placed there, or if these elements themselves find the right relations by chance, or otherwise, cooperative action between them then takes place automatically, or under a compulsion neither can resist, and something new is created. In this cooperative action, each element evidently does something, or gives something to the other, and receives something from the other. It is in fact apparently a clear case of creative action through mutual subjection and mutual service—not necessarily service for each other, because for all we know these elements may be the original anarchists and would much prefer neither to give anything to anybody, nor receive anything from anybody—but for the molecule so created.

Here, in Patten’s discussions of “creative action” at the level of elements, we see him employing a Teilhardian-like modus operandi, in his view that the “theory of evolution is not necessarily in conflict with Christian theology”, as biographers have summarized his 1919-1920 mindset. [7] Patton, likewise, continues with usages such as "creative process", "new is created", "creative act", "created by", and "in his creation", all of which is but code for chemical creationism theory:

In this creative process, the essential factors are, unity, mutual service, mutual discipline, and some sort of constructive rightness. When these conditions are fulfilled, something new is created, and these anarchistic elements then become, perforce, altruistic agents, or accessories, to some ulterior creative act, in which they may or may not be interested. In spite of themselves, by their mere existence, they are compelled to act for something beyond self, and in doing so they cease to be anarchists and become more or less orderly servants in a staid molecular society.

Mr. Molecule, therefore, is created by the mutual services and directive discipline of his constituent atoms, or elements, and by his home surroundings, all acting cooperatively to give him birth. In his creation, he becomes endowed with a sovereign quality of his own, subject to the sovereignty of his outer world. He endures as long as those cooperative services are rightly performed, and the discipline rightly maintained, and no longer. His existence, therefore, is contingent on the performance of these services, and on the existence of some degree of rightness within himself, and outside himself; and that molecule which does survive has preserved within its makeup some measure of that rightness. In that measure of cooperation and rightness lies the fitness of his constituents, and the selective agency in the evolution of the molecule.”

Chemical creationism issues aside, Patton goes on to cogently discuss how the molecule goes on to set up business for itself, among other excursions on chemical philosophy.

“We shall use the terms morality, behavior, conduct, or constructive action in the same broad way. It may sound strange to speak of the morals of an atom, or of the way in which a molecule conducts itself. But in the last analysis, science can draw no fundamental distinction between the conduct of an animal, a bullet, or a freshman, although there may be more unknown factors involved in one case than in the other.”

Here we see deep insight. In another instance he states:

“The fractions of time and space which isolate, and which give freedom and individuality to the labile units of social life, are indeed far larger, and perhaps more variable, than those which isolate the atoms of a chemical molecule, or the constituent parts of an ocean liner, or of a social institution, like a college, or university; but this same separating matrix is present in all these individualities, and so far as we may know, it is everywhere of precisely the same nature, immaterial and indefinable. Neither formal aggregation, nor contiguity of substance, is the basic attribute of unity and individuality, whether physical, organic, or social.”

On the animate-inanimate (life/death) problem, he comments:

“When we attempt to follow up these vital processes within the body, they break up into countless larger and smaller ones, mingling inextricably the living and the dead; into organs, cells, and molecules, each a system in itself, and yet interlocking with all the others in a common give and take, with merely nominal, or purely arbitrary boundaries between them, like different departments in one department store. And when the chemist, or biologist turns his sharpest scrutiny on the most vital fragments of life, the dead and the living appear not less mingled than before. Precisely what parts are ‘dead’ and what ‘alive’ does not appear. Only this is sure: what once was dead is now a part of life; and what was once a part of life, is now a part of things called ‘dead.’”

Here were gleam that he is beginning to grasp a partial view that the conception of life or "life theory" does not hold in the science of chemistry. [4]

Education
Patten completed his BS in 1883 at the Lawrence Scientific School, Harvard, where he studied under Edward Laurens Mark and Nathaniel Shaler.

Patten then won a Parker Traveling Fellowship, allowing him complete his AM and PhD in 1884 under German zoologist Rudolf Leuckart (1822-1898) at the University of Leipzig; his dissertation dealt with the development of Phryganids (caddisflies). [3] He spent the following two years at the University of Vienna and the Naples Zoological Station. In 1886, he joined the Allis Lake Laboratory of Zoology in Milwaukee as an assistant to C. O. Whitman, and in 1889 he was appointed professor of biology at the University of North Dakota, remaining there untill 1893, after which he became professor of zoology at Dartmouth College, remaining there until retirement. The photo of Patten shown above is from the 1892 publication To Commemorate the Celebration of the 70th Birthday of Rudolf Leuckart. [6]

Notes
English biologist Mark Janes, who in 2006 independently developed his own version of "Mr. Carbon Atom", akin to Patten's 1919 "Mr Molecule", considers Patten to be his "philosophical doppelgänger". [5]