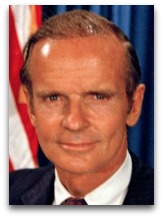 In hmolscience, William Proxmire (1915-2005) was an American politician, the US senator of Wisconsin from 1957 to 1989, noted for his 1975 to 1988 so-called Golden Fleece Awards, a pejorative award aimed at labeling prevalent examples of frivolous government spending, issued out in monthly press releases, numbering some 168 in total, the most-famous of which was his 1975 award to the NSF for spending $84,000 on a study (Ѻ) to learn why people fall in love.

In 1974, the National Science Foundation (NSF) awarded American psychologist Ellen Berscheid, of the University of Minnesota, and her colleague Elaine Walster, a grant of $84,000 ($371,000, in 2014 terms) for a study on romantic love, the phenomenon of falling in love, and or relationship research. (Ѻ) The project description included the subject of “romantic love” in its proposal, which provoked considerable controversy on use of tax dollars, and called into question use of public funds in scientific research. (Ѻ) Proxmire soon herd of this spending and awarded the NSF the first-annual so-called Golden Fleece award, given to “wasteful, ironic or ridiculous uses of taxpayer money”, per the following logic: [2]

“I object to this not only because no one—not even the National Science Foundation—can argue that falling in love is a science; not only because I'm sure that even if they spend $84 million or $84 billion they wouldn't get an answer that anyone would believe. I'm also against it because I don't want the answer. I believe that 200 million other Americans want to leave some things in life a mystery, and right on top of the things we don't want to know is why a man falls in love with a woman and vice versa. So NSF—get out of the love racket. Leave that to Elizabeth Barrett Browning and Irving Berlin. Here if anywhere Alexander Pope was right when he observed: ‘if ignorance is bliss, tis folly to be wise.’”

The following are other quoted truncations of Praxmire’s reasoning:

“No one can argue that falling in love is a science. The impact of love is a very subjective, nonquantifiable subject matter. Love is simply a mystery.”

“The study of love is better left to poets and mystics, to Irving Berlin, to thousands of high school and college bull sessions.”

Religion
Proxmire was a Protestant Christian, specifically an affiliate of the United Church of Christ.