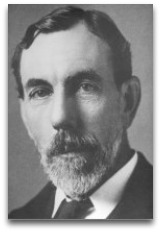 In existographies, William Ramsay (1852-1916) (Murray 4000:10|C) (CR:19) was a Scottish chemist, physical chemistry founder, noted, in human chemistry, for his 1898 description of gas molecules as akin to football players.

“I find, in my own case, that it helps greatly to a clear understanding of a concept if a mental picture can be called up which will illustrate the concept, if even imperfectly. Some such picture may be formed by thinking of the motions of the players in a game of football. At some critical point in the game, the players are running, some this way, some that; one has picked up the ball and is running with it, followed by two or three others; while players from the opposite side are slanting towards him, intent upon a collision. The backs are at rest, perhaps; but, on the approach of the ball to the goal, they quicken into activity, and the throng of human molecules is turned and pursues an opposite course. The failure of this analogy to represent what is believed to occur in a gas is that the players’ motion is directed and has purpose; that they do not move in straight lines, but in any curves which may suit their purpose; and that they do not, as two billiard-balls do, communicate their rates of motion to the other by collision. But, making such reservations, some idea may be gained of the encounters of molecules by the encounters in a football-field.”

Notes
A noted student of Ramsay was Otto Sackur.