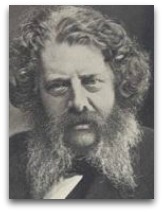 In thermodynamics, William Rankine (1820-1872) (IQ:180|#92) (CR:105) was a Scottish engineer, mathematical physicist, and thermodynamicist, of the Glasgow school of thermodynamics, noted for being, according to Scottish physicist James Maxwell, was one of the “three founders”, along with German physicist Rudolf Clausius and English physicist William Thomson, of “theoretical thermodynamics”, and for his c.1845 “The Mathematician in Love” poem, wherein he outlines, via rhyme, an equation of love, and describes love as a form of thermodynamic potential.

Overview
Rankine was one of the core thinkers who, between 1845-1865, brought the newly forming science of thermo-dynamics to maturity, in particular for his competition, so to speak, with Rudolf Clausius, in their similar, but slightly different formulations of thermodynamics (Clausius' version the one we use in modern times). [1]

Ranking notably introduced the term "potential energy" in 1853. In his 1854 article “On the Geometrical Representation of Expansive Action of Heat, and the theory of Thermo-dynamic Engines”, Rankine describes James Watt’s ‘indicator-diagram’, Emile Clapeyron’s ‘diagrams of energy’, and discusses ‘isothermal curves’ and ‘curves of no transmission of of heat’. [8]

Rankine’s chapter on thermodynamics, according to Maxwell, titled “Principles of Thermodynamics”, in his 1859 book A Manual of the Steam Engine and Other Prime Movers, was the first published treatise on the subject of thermodynamics, and is the only expression of his views addressed directly to students. [7] In the opening section of this chapter, in reference to the results of the mechanical equivalent of heat, Rankine defines thermodynamics as such:

“It is a matter of ordinary observation, that heat, by expanding bodies, is a source of mechanical energy; and conversely, that mechanical energy, being expended either in compressing bodies, or in friction, is a source of heat. The reduction of the laws according to which such phenomena take place, to a physical theory, or connected system of principles, constitutes what is called the science of thermodynamics.”


In October of 1849, Rankine finished a two-part article on a theory of "molecular vortices", by which he explained heat such that bodies consisted of voids with nuclei and atmospheres, such that circulating streams of elastic vortices existed whose volumes spontaneously adapted to their environment. [2] Building on this theory, in 1850 and over the next three years, Rankine wrote a series of papers on “The Mechanical Action of Heat”, with supplements, published in the Royal Society of Edinburgh, which related chiefly to the “mutual conversion of heat and mechanical power, by means of the expansion and contraction of gases and vapours.” [3] In this paper, Rankine set out to mathematically describe the variations of heat in a body, deriving from variations in volume and temperature, during an expansion-contraction cycle, after which the body returned to its original state. He reasoned that variation of heat in the body would be due to three components: [4]

The latter two changes, which he considered as “internal” changes, were represented by Rankine via a function U, which he says “is one depending on molecular forces, the nature of which is yet unknown”, that can be calculated directly for a body of ideal gas and calculated indirectly for other bodies by employing from the principle of the conservation of vis viva. In derivation of the first law of thermodynamics for the quantification of changes in the body, during one expansion-contraction cycle, he elaborates on an argument that the energetic effects of internal changes cancel each other out. Specifically, he states:
“Suppose a portion of any substance, of the weight unity, to pass through a variety of changes of temperature and volume, and at length to be brought back to its primitive volume and temperature. Then the absolute quantity of heat in the substance, and the molecular arrangement and distribution, being the same as at first, the effect of their changes is eliminated.”
He continues:

“The algebraical sum of the vis viva expanded and produced, whether in the shape of expansion and compression, or in that of heat, must be equal to zero.”

Where Π, when positive, represents "expansive power" (mechanical work) given out, when negative, compression power absorbed; and Q’ represents, when positive, heat given out, when negative, heat absorbed. In relation to Carnot’s caloric particle heat supposition, that the “quantity of heat remains unchanged” in its passage through the working substance, from a hot body to a cold body, Rankine concludes, in a phrasing that mirrors that views of German physicist Rudolf Clausius, that:

“According to the theory of this essay, … and to every conceivable theory which regards heat as a modification of motion, no mechanical power can be given out in the shape of expansion, unless the quantity of heat emitted by the body in returning to its primitive temperature and volume is less than the quantity of heat originally received.”

To clarify further, Rankine states that “the excess of the latter quantity (heat received, Qin) above the former (heat emitted, Qout) disappearing as heat”, modeled by:

Would thus “appear as expansive power, so that the sum of the vis viva in these two forms continues unchanged.” Within the year, Clausius, who had recently written a paper very similar to Rankine’s titled “On the Motive Power of Heat” (1850), had been sent a copy of Rankine’s paper (under the suggestion of William Thomson). This seems to have started a bit of competitive rivalry between the two; in particular, to reconcile how exactly less heat went out of the working body than went in, Rankine would go on to develop his “thermodynamic function” and Clausius his “entropy” function. Clausius’ version won out in the long run.

Vortex theory | Matter theory of heat | Change of views
Even long after an explanation of the properties of gases had been found, via the kinetic theory, on the theory of the collisions of molecules, Rankine continued to defend his molecular vortices view and in 1865 published what he supposed to be a proof that the phenomena of heat were invariably due to steady streams of continuous fluid matter. [5] Said another way, citing Rankine’s 1865 paper (pg. 244), American science historian Fielding Garrison cites Rankine as the last of the adherents of the so-called material theory of heat:

“As of late 1865 an authority like Rankine still believed that heat is of material essence.”

In 1869, in his “Thermal Energy of Molecular Vortices”, however, Rankine recants (see: list of recants) and admits that the expansion of gaseous pressure by the impacts of molecules has been proved to be possible. [6]

Education
In 1828, at age 8, Rankine attended Ayr Academy for two years (1828-29) followed by Glasgow High School (1830) for one year, after which, at age 10, an illness forced him to leave and for the next six years he was taught by his father David Rankine, a respected railway engineer in the Edinburgh & Dalkeith Railway. At age 14, his father gave him a copy of Isaac Newton’s Principia, in Latin, which he subsequently absorbed, thus laying the foundation of his knowledge in higher mathematics, dynamics, and physics. [9]

In 1836, at age 16, Rankine began studying chemistry, natural history, under Robert Jameson, botany, and natural philosophy, under James Forbes, at the University of Edinburg. Under Forbes he was awarded prizes for essays on methods of physical inquiry and on the undulatory (or wave) theory of light.

Rankine left the University of Edinburgh in 1838 without a degree (which was not then unusual) and, perhaps because of strained family finances, became an apprentice to John Macneill, who was at the time surveyor to the Irish Railway Commission, and there worked under John MacNeill on the railways and canals of Ireland. During his pupilage he developed a technique, later known as Rankine's method, for laying out railway curves, fully exploiting the theodolite and making a substantial improvement in accuracy and productivity over existing methods.

In 1842, Rankine returned to Edinburgh and worked for railway companies, consulting engineers, and later in the London office of Lewis Gordon, who at the time was chair of civil engineering and mechanics, recently set up at the University of Glasgow—a post that Rankine would eventually succeed him (1855) in—and also that year attempted to reduce the phenomena of heat to a mathematical form but he was frustrated by his lack of experimental data. In 1848, Rankine switched careers to study mathematical physics, thermodynamics, and applied mechanics.

In 1849, through the actions of William Thomson, Rankine was elected a fellow of the Royal Society of Edinburgh, and in 1854, he was awarded the Keith medal for his work in thermodynamics. Rankine was professor of civil engineering and mechanics at the University of Glasgow from 1855 until his death in 1872, pursuing engineering research along a number of lines in civil and mechanical engineering.

In 1872, after a long battle, the authorities agreed to Rankine’s proposal of awarding the academic degree bachelor of science for the study of engineering at British universities, the first step toward raising the status of engineering sciences in universities.

Rankine is associated with both the Edinburgh school and the Glasgow school of thermodynamics.

“A hypothetical theory is necessary, as a preliminary step, to reduce the expression of the phenomena to simplicity and order before it is possible to make any progress in framing an abstract theory.”

“Discrepancy between theory and practice, which in sound physical and mechanical science is delusion, has a real existence in the minds of men; and that fallacy, though rejected by their judgments, continues to exert and influence over their acts.”

— William Rankine (1856), Introductory Lecture on the Harmony of Theory and Practice in Mechanics [12]