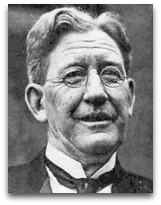 In hmolscience, William Ritter (1856-1944) was an American geologist, zoologist, and biologist noted for 1909 there is no actual beginning of life in time position, aka no origin theory of life argument, amid the 1910s ongoing vitalism-materialism debates, supposedly, penning out a third alternative to materialism and vitalism, namely: organicism. (Ѻ)

Materialism | Vitalism
In 1908 to 1909, the Philosophical Union of the University of California, held a series of discussions led by speakers from various departments of biology; the concluding paper of the academic year of discussion was Ritter’s “Life From the Biologist’s Standpoint”, wherein he digresses on the chicken and the egg problem, Herbert Spencer’s views on whether life or organization came first, then ventures into chemistry discussion, during which time he tackles the so-called mind-body problem with the following hypothesis:

“Since we know absolutely nothing about the relation of the atoms in living substance, would it not be a reasonable hypothesis to say that the nature of that marvelous process called metabolism is due to just the fact that the atoms of carbon, nitrogen, hydrogen, oxygen, etc., are undergoing perpetual change of valence? I see no reason why we may not legitimately imagine even consciousness due to such a process. Were such a hypothesis to be seriously taken, it would seem to follow that consciousness would have its roots wherever metabolism is going on. What an excellent starting point this would make for dealing with the perennial puzzle of how it is that the ‘mind influences the body’! The mind would then be part of the body.”

Ritter goes on to tentatively state that his views might be similar to Henri Bergson, whose work he has recently been directed towards, and also, supposedly, German-Swiss philosopher Richard Avenarius (1843-1896):

“This suggestion as to the chemical foundation of consciousness would seem to fall in admirably with the views held not only by M. Bergson but also by Avenarius (Ѻ), that not the brain alone but the whole body is the seat of conscious life.”

At the end of his talk, Ritter concludes with the following: [1]

“The hypothesis of an actual beginning of life in time seems to be growing less and less fruitful with the advance of experiential knowledge.”

Education
Ritter, as a youth, according to his uncle Nelson Ritter, was a voracious reader who was always seeking meaning. In 1879, he attended Oshkosh Normal School (now University of Wisconsin, Oshkosh) where he became enchanted University of California, Berkeley professor Joseph LeConte’s Elements of Geology (1878), with its unbiased perspective—LeConte (1823-1901) being someone who is characterized as a pre-Teilhardian like thinker who did early grappling with the religion, science, and evolution issue—which convinced him to go to UC Berkeley where he complete BA in geology, under LeConte, in 1888. He then completed his MA and PhD in zoology at Harvard University, after which he went to Berkeley to teach biology, thereafter becoming the founding chair of new zoology department. In 1903, he met American newspaper magnate E.W. Scripps, and together they founded the Scripps Institution of Oceanography, in San Diego.

“Joseph LeConte, more than any other teacher, helped me to look with the eye of reason upon the beauty, the wonder, the majesty, and the mystery of nature.”