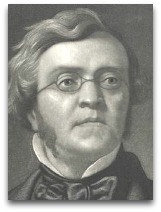 Overview
In 1830-1831, Thackeray took up residence in Weimar, where he began to read and translate Goethe and Schiller, went often to the theater, and fell variously in love with a great and apparently insipid beauty, on one hand, and also with a young woman of wit, sensibility, and illicit origins, on another hand, as Martin Meisel (2014) reports. [1]

In 1853, in his Vanity Fair: A Novel Without a Hero, Thackeray name-drops Elective Affinities, a period wherein the work had not yet been translated in to English, as follows: [2]

“So, pleased herself, she tried with all her might to please everybody; and we know that she was eminent and successful as a practitioner in the art of giving pleasure. As for Jos, even in that little interview in the garret at the Elephant Inn, she had found means to win back a great deal of his good will. In the course of a week, the civilian was her sworn slave and frantic admirer. He didn't go to sleep after dinner, as his custom was, in the much less lively society of Amelia. He drove out with Becky in his open carriage. He asked little parties and invented festivities to do her honor. Tapeworm, the Chargé d'Affaires, who had abused her so cruelly, came to dine with Jos, and then came every day to pay his respects to Becky. Poor Emmy, who was never very talkative, and more glum and silent than ever after Dobbin's departure, was quite forgotten when this superior genius made her appearance. The French Minister was as much charmed with her as his English rival. The German ladies, never particularly squeamish as regards morals, especially in English people, were delighted with the cleverness and wit of Mrs. Osborne's charming friend; and though she did not ask to go to Court, yet the most august and Transparent Personages there heard of her fascinations, and were quite curious to know her. When it became known that she was noble, of an ancient English family, that her husband was a Colonel of the Guard, Excellenz and Governor of an island, only separated from his lady by one of those trifling differences which are of little account in a country where Werther is still read, and the Wahlverwandschaften of Goethe is considered an edifying moral book, nobody thought of refusing to receive her in the very highest society of the little Duchy; and the ladies were even more ready to call her du, and to swear eternal friendship for her, than they had been to bestow the same inestimable benefits upon Amelia. Love and Liberty are interpreted by those simple Germans in a way which honest folks in Yorkshire and Somersetshire little understand; and a lady might, in some philosophic and civilized towns, be divorced ever so many times from her respective husbands, and keep her character in society. Jos's house never was so pleasant since he had a house of his own, as Rebecca caused it to be. She sang, she played, she laughed, she talked in two or three languages; she brought everybody to the house: and she made Jos believe that it was his own great social talents and wit which gathered the society of the place round about him.”

In 2014, Martin Meisel, in hi Realizations: Narrative, Pictorial, and Theatrical Arts in Nineteenth-Century England, comments, in respect to the above, that there is more here than meets the eye: [1]

“Thackeray had a direct interest in Elective Affinities, however, that was more than historical, and the complex relations between that novel and Vanity Fair deserve a fuller exploration than they have received, or will receive here.”

Meisel notes that Thackeray met Goethe during his stay in Weimar and was part of his daughter-in-law Ottilie Pogwisch’s literary and artistic circle. Meisel comments on the Vanity Fair citation:

“Such disparagement belongs to the ironic moralist’s public voice rather than to the voice of the imagination, which in Thackeray spoke alluringly of heated spiritual affinities and even spiritual adultery. His imagination would seem also to have responded to the contrast in Elective Affinities between two young women, a contrast crystallized in tabnleauzx vivants. The difference between Goethe’s use and Thackeray’s reuse of this pictorial-theatrical device is as interesting as the similarities.”

In 2015, Goethean scholar Ritchie Robertson cites this as follows: [2]

“Love, marriage and divorce are the subject of Goethe’s novel Die Wahlverwandtschaften (Elective Affinities, 1809). They are treated with a frankness that shocked Goethe’s readers in Victorian England: Thackeray in Vanity Fair deplores how in German society ‘the Wahlverwandtschaften of Goethe is considered an edifying moral book’.”