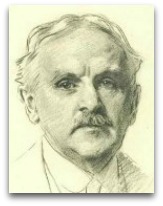 In hmolscience, William Roscoe Thayer (1859-1923) was an American historian noted, in history thermodynamics, for his his 1918 address “Vagaries of Historians”, wherein he critiqued the physio-chemical historical dynamics theories of Henry Adams.

Overview
In 1918, Thayer, in his address “Vagaries of Historians”, delivered before the American Historical Association, critiqued American historian Henry Adams’ 1910 Letter to American Teachers of History on the suggested incorporation of the second law of thermodynamics in the teaching of history in America. [1] Thayer’s central conclusion is that: [2]

“The time may come when human affairs may be described no longer by words and sentences, but by a system of symbols or notation similar to those used in algebra or chemistry … then it may be possible, as Adams suggests, to invent a common formula for thermodynamics and history.”

Thayer also notes the many difficulties or obstacles to this task, such as the resultant race-specific eliminations of WWI (1914-1918) where science, i.e. the theory of survival of the fittest, in Thayer's view, was used by the Germans to justify human ends, conflicts with religion, morality issues, etc.

In his "Vagaries" address, on the idea of application of thermodynamics to history, in Adams’ premise, for instance that the history of the Peloponnesian War (431-404BC) or the American Revolution (1775-1783) would disclose how each was an experiment, so to speak, not merely of politics and war, but also in the dissipation of energy, Thayer asks:

“What means of measuring this dissipation would the historian have? If Kelvin’s law is true, there must have been less energy in 1865, when our Civil War [1861-1865] ended, than in 1861, when it began. The energy dissipated during these four years was not only human but material, solar, sidereal, cosmic. Who can compute it?”

Thayer also asks that if we are to incorporate hard science into the study of history and human affairs why use one of the laws of thermodynamics in particular, as compared to other laws of science. Specifically:

“Why should we inject into our description of human affairs the law of dissipation rather than the law of gravitation, or of capillary action, or the binomial theorem?”

He concludes that so far as any of these scientific truths or others affect the action of humans, that one may notice their affects, but not otherwise, but leaves the issue open to future speculation.

Other
Thayer, prior to the publication of his 1915 biographical book Life and Letters of John Hay , received a private printing review copy of Adams' autobiographical Education. [3]

Education
Thayer completed his BA, in 1881, and MA, in 1886, both from Harvard University.