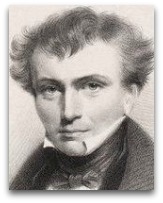 In existographies, William Whewell (1794-1866) (IQ:175|#278) was an English polymath noted for a number of coinages that arose in debates with him, such as "scientist", a specific non-morality field type of natural philosopher (older term), and "physicist", that were coined as a repercussion of the Whewell-Coleridge debate (1833), "human chemistry", in followup debate (E.B., 1851) on his Bridgewater Treatise (1833), and he is said to have suggested the terms ion, dielectric, anode, and cathode to English physicist chemist Michael Faraday. [1]

Affinity | History
In 1840, Whewell, in his “The Establishment and Development of the Idea of Chemical Affinity”, had the following to say about Herman Boerhaave's 1732 comments on chemistry and love: [1]

“In 1775, the Swedish chemist Bergman, pursuing still further this subject of chemical affinities, and the expression of them by means of tables, returned again to the old Newtonian term; and designated the disposition of a body to combine with one rather than another of two others as elective attraction. And as his work on Elective Attractions had great circulation and great influence, this phrase has obtained a footing by the side of affinity, and both one and the other are now in common use among chemists.

There are some analogies drawn from the common meaning of this word, which appear to recommend it as suitable for the office which it has to discharge. For common mechanical attractions and repulsions, the forces by which one body considered as a whole acts upon another external to it, are, as we have said, to be distinguished from those more intimate ties by which the parts of each body are held together. Now this difference is implied, if we compare the former relations, the attractions and repulsions, to alliances and wars between states, and the latter, the internal union of particles, to those bonds of affinity which connect the citizens of the same state with one another, and especially to the ties of family.

We have seen that Boerhaave compares the union of two elements of a compound to their marriage; “we must allow,” says an eminent chemist [Jean Dumas, 1837] of our own time”, “that there is some truth in this poetical comparison.” It contains this truth, that the two become one to most intents and purposes, and that the unit thus formed (the family) is not a mere juxtaposition of the component parts. And thus the idea of Affinity as the peculiar principle of chemical composition, is established among chemists, and designated by a familiar and appropriate name.”

Polymathy
Whewell has frequently been described as a polymath. [2] What is most often remarked about Whewell is the breadth of his endeavors. At a time when men of science were becoming increasingly specialized, Whewell appears as a vestige of an earlier era when men of science dabbled in a bit of everything. He researched ocean tides (for which he won the Royal Medal), published work in the disciplines of mechanics, physics, geology, astronomy, and economics, while also finding the time to compose poetry, author a Bridgewater Treatise (religious re-interpreted in terms of natural phenomena), translate the works of Goethe, and write sermons and theological tracts, all while becoming a relative science history buff.