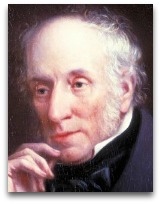 Coleridge
In 1798, Wordsworth, together with Samuel Coleridge, published Lyrical Ballads, which is sometimes credited as having helped to launch the romantic age in English literature. In 1800, Coleridge, on his on his plans to set up a joint chemistry laboratory with Humphry Davy and Wordsworth in Lake District, commented the following: [3]

Stewart
Wordsworth was an associated of John Stewart; the following being an example dialogue:

“Stewart is the most eloquent man on the subject of nature I have ever met.”

Quotes | On
The following are noted quotes on Wordsworth:

“Wordsworth's claim, his special gift, his lasting contribution, lies in the extraordinary strenuousness, sincerity and insight with which he first idealizes and glorifies the vast universe around us, and then makes of it, not a theatre on which men play their parts, but an animate presence, intermingling with our works, pouring its companionable spirit about us, and ‘breathing grandeur upon the very humblest face of human life’.”

Quotes
The following are noted quotes by Wordsworth:

"And 'tis my faith, that every flower
Enjoys the air it breathes."