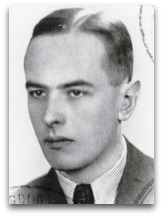 In human chemistry, Witold Gombrowicz (1904-1969) was a Polish lawyer turned dramatic novelist noted for his 1960 novel Pornografia, wherein he explores the dark limits of sexuality via a mixture of Goethe's Elective Affinities and Michael Faraday's "lines of force" reconceptualized as lines of passion, or thereabouts.

Overview
In circa 1950s, Gombrowicz wrote his novel Pornografia, which was first published in French in 1960, which he described as "a descent to the dark limits of the conscience and the body" and which is said to be a modern rewrite of German polymath Johann Goethe’s 1809 physical chemistry based novella Elective Affinities, both making references to the chemical model of combination to explain human affairs and passions.

In 2003, a film adaption of the novel was made, of which the following is a synopsis, also shown pictured below: [5]

"Set in Nazi-occupied Poland, Pornography (Pornografia) focuses on two middle-aged men: Frederic, a theater and film director, and Witold, a writer who serves as a wry commentator. The two journey out to the country estate of Hippolyte, a friend of Witold marginally involved in the resistance. There they encounter German soldiers and partisans, young lovers and even younger murderers, patriots and Catholics. Frederic will reveal an uncanny ability to hear clearly even distant and delicate sounds. Director Jan Jakub Kolski effectively finds the cinematic means to capture Gombrowicz's abrupt changes of mood and tone and almost surreal juxtapositions, while anchoring the story in a very concrete time."

The mention of the "estate" here would seem to indicate that Gombrowicz has Goethe's "estate" in mind as his reaction vessel as did Goethe; and the two men, Frederic and Witold, seem to embody the chracters Edward and the Captain of Elective Affinities, who are both, under various circumstances and times, in love with Charlotte.

“The Pornography of Witold Gombrowicz. Rarely it was written a novel, not whose conscience was so clear - there are so many and what interest? - But the clarity was so conscious. Rarely, and perhaps not since Goethe’s Elective Affinities Goethe. We say why.”

seems to be one of the first publications to make a connection between Goethe and Gombrowicz. A more recent 2011 summary of the mixture of Regnault’s views on Gombrowicz in regards to Goethe is as follows: [2]

“Regnault situates Gombrowicz’s Pornography in the tradition of Goethe’s Elective Affinities, which could be said to represent ‘a decisive break [coupure]’ from the approach to the novel found in Rousseau’s Nouvelle Héloïse. Although novels portraying ‘the transparency of consciousness’ are no longer uncommon, novels where ‘transparency itself assumes consciousness’ are rare: ‘so rare’ that Pornography could be ‘the first since Goethe’s Elective Affinities’ [3].

Both Goethe and Gombrowicz incorporate explanations of structure into their narratives, and both make references to a chemical model of combination. ‘Gombrowicz’s novelty consists in his going one step further and perfecting Goethe’s revolution’: the character of Olek Skuziak allows him to destroy the narratives completely and put himself ‘in the position of speaking to oneself alone’. Regnault writes, on Gombrowicz’s behalf: ‘My pornography is an optic of perversions, but it is also an inversion of the art of writing, a pornology of writing’. When Gombrowicz writes of ‘persevering in obscenity’, the persevering designates the rigours of the structure, which allow one to surpass the charms of obscenity and lead to their expulsion.”


The mention here of the character of Olek Skuziak could be the embodiment of the "Otto" conceptual character.

Likewise, German literature theorist Hanjo Berressem argues, in his 1998 Lines of Desire, chapter one Theory and Text: Elective Affinities, that Gombrowicz’s Pornografia is “a subversive rewrite of Goethe’s Elective Affinities, from which it takes, among other things, its chemical imagery and the use of tableaux vivants”. [4]

Lines of force | Lines of desire
Berressem, interesting, also shows how Gombrowicz, supposedly, updates Goethe’s reaction theory with English chemist Michael Faraday’s 1830s lines of force (precursor to James Maxwell's electromagnetic field lines and hence to the concept of the electromagnetic force) to explain the lines of force of passion (or desire), or something these lines (no pun intended). [4] Berressem argues that the following happening in Pornography: [4]

As Frederick writes to Witold about his plans: “I follow the lines of force, you understand? The lines of desire” (Gombrowicz, pg. 102; emphasis added).


Corresponds to the following passage from Elective Affinities:

“Just as each thing has a connection to itself, so it must equally have a relationship [Verhaltnis] to others …. that will vary according to the the variations in the different species.” (Goethe 1976, pg. 34)