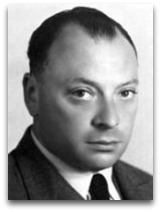 In existographies, Wolfgang Pauli (1900-1958) (IQ:175|#220) (CR:65) was an Austrian theoretical physicist, son of chemist Wolfgang Joseph Pauli and godson (Ѻ) of Ernst Mach, noted for being the first to propose the concept of “spin”, and hence the Pauli exclusion principle, and for his 1933 article on the foundations of quantum mechanics.

In 1952, Pauli, one summer night, and Werner Heisenberg, following a Copenhagen meeting on quantum mechanics (with Niels Bohr), entered into a dialogue on god and soul, wherein, as recounted by Heisenberg (below), Heisenberg stated frankly that the main issue (or tension) is that we don’t yet have a gravito-electromagnetic force based "moral compass", the way sailors do for directional guidance in the earth’s magnetic force

Thermodynamics
In thermodynamics, Pauli is noted for his “Pauli Lectures” on physics, given at the ETH in Zurich, the third division of which became compiled as the 1958 book Thermodynamics and the Kinetic Theory of Gases, which is said to be a conventional course in phenomenological thermodynamics, which goes through the labors of the Carnot cycle and the van’t Hoff boxes. [1] Of note, in 1958, during his occupation with this course, Pauli worked out a better formulation of chemical reactions, the manuscript description of which was included in the German edition of his lectures.

The following is a 22 Dec 1949 letter from Pauli to German-American physicist Ralph Kronig, on the subject of the lack of discussion on the subject of love in the 20th century, in which German polymath Johann Goethe’s 1809 Elective Affinities is mentioned: [2]

Education
As a teen, Pauli had read Einstein’s work on relativity, and by the time he was 18, he had published several definitive papers on relativity. In 1921, at the age of 21, Pauli completed his PhD in theoretical physics under advisor was Arnold Sommerfeld. [3]