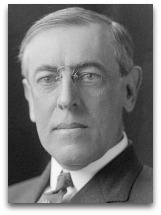 In hmolscience, Woodrow Wilson (1856-1924) was the 28th American President notable as being one of the members of the Princeton social physics school, for his efforts to, supposedly, overcome the “friction” of the separation of powers in America, and for his 1912 presidential candidate speech wherein he contends that American 4th president James Madison’s Newtonian-based version of the Constitution was outdated, in that government, as he saw things, was answerable to Darwin not to Newton. [1]

Political dynamics
In 1908, Wilson, in his Constitutional Government in the United States lectures-turned-book, stated the following, in regards to theoretical structure of constitutions, in general—the concept of which, i.e. a constitutional government, he says arose at Runnymede, when the barons of England in 1215 exacted the Magna Carta of John, the resulting constitution of England being the mother of all constitutions as he says:

“The government of the United States was constructed upon the Whig theory of political dynamics, which was a sort of unconscious copy of the Newtonian theory of the universe [see: Newtonian government]. In our own day, whenever we discuss the structure or development of anything, whether in nature or in society, we consciously or unconsciously follow Darwin; but before Darwin, they followed Newton. Some single law, like the law of gravitation, swung each system of thought and gave it its principle of unity. Every sun, every planet, every free body in the spaces of the heavens, the world itself, is kept in its place and reined to its course by the attraction of bodies that swing with equal order and precision about it, themselves governed by the nice poise and balance of forces which give the whole system of the universe its symmetry and perfect adjustment. The Whigs had tried to give England a similar constitution.”

Darwin | Newton
In 1912, Wilson, in his “What is Progress?”, his second campaign speech, tells the story of how when he was president of Princeton, he listened to a lecture of a visiting Scottish philosopher who discussed Newtonian thinking in respect to Darwinian thinking, which triggered in Wilson speculation about how a Darwinian reformulation of the Constitution might be a good political platform, which he explains as follows:

“One of the chief benefits I used to derive from being president of a university was that I had the pleasure of entertaining thoughtful men from all over the world. I cannot tell you how much has dropped into my granary by their presence. I had been casting around in my mind for something by which to draw several parts of my political thought together when it was my good fortune to entertain a very interesting Scotsman who had been devoting himself to the philosophical thought of the seventeenth century. His talk was so engaging that it was delightful to hear him speak of anything, and presently there came out of the unexpected region of his thought the thing I had been waiting for. He called my attention to the fact that in every generation all sorts of speculation and thinking tend to fall under the formula of the dominant thought of the age. For example, after the Newtonian theory of the universe had been developed, almost all thinking tended to express itself in the analogies of the Newtonian theory, and since the Darwinian theory has reigned amongst us, everybody is likely to express whatever he wishes to expound in terms of development and accommodation to environment.”

“Now, it came to me, as this interesting man talked, that the Constitution of the United States had been made under the dominion of the Newtonian theory. You have only to read the papers of The Federalist to see that fact written on every page. They speak of the "checks and balances" of the Constitution, and use to express their idea the simile of the organization of the universe, and particularly of the solar system,—how by the attraction of gravitation the various parts are held in their orbits; and then they proceed to represent Congress, the Judiciary, and the President as a sort of imitation of the solar system.

They were only following the English Whigs, who gave Great Britain its modern constitution. Not that those Englishmen analyzed the matter, or had any theory about it; Englishmen care little for theories. It was a Frenchman, Montesquieu, who pointed out to them how faithfully they had copied Newton's description of the mechanism of the heavens. The makers of our Federal Constitution read Montesquieu with true scientific enthusiasm. They were scientists in their way,—the best way of their age,—those fathers of the nation. Jefferson wrote of "the laws of Nature,"—and then by way of afterthought,—"and of Nature's God." And they constructed a government as they would have constructed an orrery,—to display the laws of nature. Politics in their thought was a variety of mechanics.”

“The Constitution was founded on the law of gravitation. The government was to exist and move by virtue of the efficacy of ‘checks and balances.’ The trouble with the theory is that government is not a machine, but a living thing. It falls, not under the theory of the universe, but under the theory of organic life. It is accountable to Darwin, not to Newton. It is modified by its environment, necessitated by its tasks, shaped by the sheer pressure of life.”

Religion
Wilson, supposedly, was a deeply religious Presbyterian; the following, to exemplify, are retrospect comments by Raymond B. Fosdick, one of his former students: [2]

“Wilson was a deeply religious man. He believed that God was working out his purposes in this world, and once he made up his mind that a particular course of action represented the will of God, nothing could shake him loose from it.”

Fosdick, who was with Wilson during his last days, comments how Wilson, with tears running down his face, said “You can’t fight God!”, in commentary on his failed effort to actuate the League of Nations, based on what he thought was an underlying principle, representing the fulfillment of a preordained purpose, mediated or enacted by the will of God.

Quotes | By
The following are quotes by Wilson:

“It would seem a waste of time to point out that ancient distinction,—between mere change and improvement. Yet there is a class of mind that is prone to confuse them. We have had political leaders whose conception of greatness was to be forever frantically doing something,—it mattered little what; restless, vociferous men, without sense of the energy of concentration, knowing only the energy of succession. Now, life does not consist of eternally running to a fire. There is no virtue in going anywhere unless you will gain something by being there. The direction is just as important as the impetus of motion.”

“May it suffice for me to say that of course like every other man of intelligence and education I do believe in organic evolution. It surprises me that at this late date such a question should be raised.”