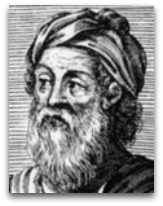 Religion | Morality
Xenophanes was a critic of Greek god-based morality; for example: [2]

He, supposedly, advocated some type of proto-monotheism.

Horses | Anthropomorphism
The famous atheism quote “if horses could draw” quote, supposedly, originated with in the fragments of Xenophanes:

“Montaigne says ‘Man is not able to be other than he is, nor imagine but after his capacity; let him take what pains he may, he will never have a knowledge of any soul but his own.’ Xenophanes said, ‘If the ox or the elephant understood either sculpture or painting, they would not fail to represent the divinity under their own peculiar figure; that in this, they would have as much reason as Polyclitus or Phidias, who gave him the human form.’ It was said to a very celebrated man that ‘god made man after his own image’; ‘Man has returned the compliment’, replied the philosopher; and L'amotte le Vayer used to remark, that ‘theanthropy (Ѻ) was the foundation of every system of Christianity’.”

“If horses could draw, god would have four limbs and run very fast.”

Latin scholar Patrick Walsh (1997) says the statement comes from Xenophanes and that he is best known for attacking anthropomorphism with this technique.

God
In 45BC, Cicero, in his On the Nature of the Gods, summarized Xenophanes view of god as follows: [3]

“Xenophanes argued that the whole world had a ‘mind’ attached to it, and was god because it was ‘unbounded’. On this concept of mind as god, he will be subject to the same censure as his predecessors; on god’s infinity, the criticism will be even more severe, for what is infinite can have neither sensation nor connect with anything outside itself.”

In 1997, Patrick Walsh, in footnote commentary on Cicero’s view of Xenophanes, he states: [3]

“Xenophanes posits, instead [of anthropomorphized gods], a single god ‘greatest among gods and men, not like men in form and thought, remaining motionless in the same place, shaking all things by the thought of his mind’.”

Evolution
Xenophanes taught that all organisms originate from earth and mud. [1] He observed fossil fishes and shells, and concluded that the land where they were found had been underwater at some time; he taught that the world formed from the condensation of water and ‘primordial mud’, and was the first person known, supposedly, to have used fossils as evidence for a theory of the history of the earth. (Ѻ)

Education
Xenophanes was a disciple of Anaximander (Ѻ) and also, supposedly, of the lineage of Pythagoras or the Pythagorean school.

Quotes | By
The following are quotes by Xenophanes:

— Xenophanes (c.475), comment (Ѻ) made, according to Laertius (c.230), to Empedocles who remarked: “it is impossible to find a wise man!” (see: genius recognizes genius)