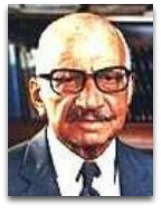 In economic thermodynamics, Xenophon Zolotas (1904-2004) was a Greek social economist who in 1981, building on the work of Nicholas Georgescu (1971), argued that the law of entropy, i.e. the second law of thermodynamics, has a functional relationship to economic growth. [1] In 2005, Greek theorist Dimitris Keranis used Zolotas’ function to argue that the work produced in social system is quantified by both the Gibbs free energy function and in economic terms by Zolotas’ function. [2]

Zolotas’ function
In his 1981 book Economic Growth and Declining Social Welfare, Zolotas on the thermoeconomic theories of Romanian mathematician Nicholas Georgescu-Roegen who previously in his 1971 The Entropy Law and the Economic Process had laid out the view that the amount of energy bound within a closed system continuously increases; where, as a result, there is a gradual shift from low entropy (large free energy) to high entropy (large bound energy). The thermodynamic balance of such a system, according to Zolotas, is restored when "all the free energy is converted to bound energy." The effects of the law of entropy in relation to economic growth, according to Zolotas, "can best be understood if the world ecosystem is conceived as a closed system, in which one of the links is human economic activity."

Education
Zolotas was prime minister of Greece in the late 1980's, who as one of Greece's leading economists, helped lead the revival of Greece's shattered economy after World War II. He was one of the four leading international economists entrusted with the shaping of the Organization for Economic Development and Cooperation (OECD) in 1960 and served as a caretaker prime minister of that country in 1989 and 1990. [3]