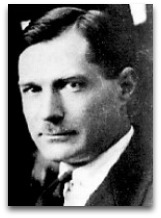 In existographies, Yevgeny Zamyatin (1884-1937) (CR:25), aka "Eugene Zamiatin" (Seidenberg, 1950), was a Russian engineer and writer noted, in literature thermodynamics, for his 1920 thermodynamical society conceptualized novel We, futuristic type of 26th century dystopia-utopia, wherein all actions are calculated mathematically and scientifically, through what is called an integration of the indefinite equation of the universe (see also: Isaac Asimov's Foundation Series).

Overview
In 1919, Zamyatin made the initial draft of We and finished the final version 1921, the central premise which, according to Zamyatin, was the problem of the individual personality (the "I") versus the collective (the "we"), discussed in the guise of futuristic type of 26th century dystopia-utopia, wherein all actions are calculated mathematically and scientifically, through what is called an integration of the indefinite equation of the universe. [8]

A central premise is the subject of "freedom", which is attributed to societies in primitive states, seen as synonymous with "disorganized wildness", verses being subjugated to the control or the power of the nation-state and the formulas for controlled happiness.

In We, Zamyatin positions the logic that the thermodynamics of molecules in closed systems at equilibrium is the physical analogue of the political status of individuals (human molecules) in a totalitarian regime, within which one is either imprisoned by order or liberated by chaos. [4] The following is a popular quote from We: [5]

“Surely you see that only differences, difference of temperature, on contrasts in degree of heat, only that makes for life? And if throughout the universe all bodies are equally worm, or equally cool … you’ve got to smash them into each other—so there’ll be fire, explosion, inferno.”

In We, according to a review by American literary thermodynamicist Bruce Clark, “the violent social impasse between entropic mechanism and evolutionary vitalism takes high-modernist form”, within which Zamyatin “mixes classical thermodynamics with the leading edge of Einsteinian physics.” [4]

As this so-called individuality "problem" was at odds with the philosophy of communism, We was quickly banned by Glavlit, the new Soviet censorship bureau, and remained a banned in Russia until 1988.

In 1923, Zamyatin followed up his novella with his essay “On Literature, Revolution, Entropy, and Other Matters”, in which he attemptes to describe the Russian revolutions of 1905 and 1917 in the language of thermodynamics, with mentions of Euclid, Galileo, Darwin, Schopenhauer, Nietzsche, Tolstoy, among others. [1]

Happiness
In We, Zamyatin gives the following mathematical formula for happiness:

or the ratio of bliss to envy, whereby when envy is decreased towards zero (e.g. by mathematically organizing sexual impulse and love), bliss goes to infinity; which he says is used to regulate the nature of the OneState.

Frederick Taylor
Zamyatin often refers to the work of American mechanical engineering consultant Frederick Taylor (1856-1915), e.g. the “formulae of Taylor”, “Taylor exercises”, and what seems to be the logic of work task formulation as described in his 1911 Principles of Scientific Management. In this work, Taylor derives three mathematical equations, based on twelve input variables of the process of a man cutting metal in the factory, equations, which he says can be solved by the mathematician, that in the end will make the task more efficient. Taylor extrapolates on the premise that this type of mathematical formulation can be extended to all types of social activities, such as in the management of one’s home, farm, business, and other institutions. [9] Zamyatin’s idea is to extend this formulation method to the 24-hours of human movement. As the lead character D-503, the one who is in the process of formulating the equations of existence, comments:

“No doubt about it, that Taylor was the genius of antiquity. True, it never finally occurred to him to extend his method over the whole of life, over every step you take right around the clock. He wasn’t able to integrate into his system the whole spread from hour 1:00 to 24:00. But still, how could they write whole libraries about someone like Kant and hardly even notice Taylor—that prophet who could see ten centuries ahead?”

Correctly, to note, Taylor did conclude in his introduction:

“It is hoped that it will be clear to readers that the same principles can be applied with equal force to all social activities.”

A downfall about Taylor's approach is that there does not seem to be an fundamental physical science basis to his approach, other than to "increase employer-employee coupled maximum prosperity."

On Literature, Revolution, Entropy, and Other Matters
Two years after We was finished, Zamyatin got around to putting his central philosophy or idea into essay form, using the speech of 1-330 as an epigraphy. The essay was titled “On Literature, Revolution, Entropy, and Other Matters” (1923), in which he attempts to describe the Russian revolutions of 1905 and 1917 in the language of thermodynamics. [1] The epigraph derives from Record 30 of We, the philosophical core of the book. The logic presented is that there are two forces at war, like the Country and City, the Mephi and OneState, and these forces are energy and entropy. [7]

Color of entropy
Of curious note, it is said that Zamyatin had synesthesia, a condition in which letters or numbers are perceived as inherently colored. Zamyatin supposedly gave letters and sounds qualities. To Zamyatin, “L”, for instance, was pale, cold and light blue. [2] The law of entropy, in Zamyatin’s view, according to Danish science historian Helge Kragh, was conformist and anti-revolutionary because it promised a dull equilibrium state form which no new revolution could ever emerge. [3] Hence, according to Zamyatin:

“The law of revolution is red, fiery, deadly; but this death means the birth of new life, a new star. And the law of entropy is cold, ice blue, like the ice interplanetary infinities … the sun ages into a planet, if the planet is to be kindled into youth again, it must be set on fire, it must be thrown off the smooth highway of evolution.”

Gladyshev’s review
According to a review of original Russian text of We by Russian physical chemist Georgi Gladyshev, “Zamyatin gives a grotesque image of a totalitarian regime. Serious considerations on entropy, energy are not to be found. It seems that the author is familiar with physics a little. The terms of entropy and energy he uses as fancy words. He knows about the heat death of the universe as a system of ideal gas. The term "psychological entropy" is only fashionable combination of words. In the book there are no facts which indicate that the author is relevant to the beginnings of the field of human thermodynamics. Zamyatin, as the author the We, can only be referred to as a writer, who used only a few phrases with thermodynamic terms.” Gladyshev cites the following excerpts:

“... Here: the two forces in the world - the entropy and energy. One - to the blessed rest, to a happy equilibrium, the other - to destroy the balance, the painfully-infinite movement. Entropy - our, or rather - your ancestors, the Christians, to worship God. And we, the anti - Christians, we are ...

- Aga: Uniformly, everywhere! That's it the most and are – entropy, Psychological entropy. You, mathematics - is it not clear that the only difference between the temperature, only thermal contact - only their lives. And if everywhere throughout the universe, the same heat or cool the body equally ... They need to push - to fire, explosion, Hell. And we will face.”

Education
Zamyatin studied naval engineering in Saint Petersburg from 1902 to 1908 during which time he joined the Bolsheviks; wherein he was arrested during the Russian Revolution of 1905 and exiled, but returned to Saint Petersburg where he lived illegally before moving to Finland in 1906 to finish his studies. He graduated as a naval engineer in circa 1915.