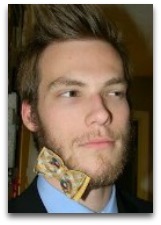 In human thermodynamics, Zack Brown (c.1992-) is an American cartoon artist noted for his 2012 cartoon philosophy take on entropy and relationships.

Overview
In 2012, Brown, in his art thermodynamics style cartoon “Thermodynamics of Love” cartoon (see: thermodynamics of love), from his Stickmen with Martinis blogspot, a cartoon series concerning politics, philosophy, and randomness, showing two stickpeople discussing their relationship in thermodynamic terms, wherein the guy tells his girlfriend (as illustrated blow): [1]

“I just feel that our relationship’s entropy has increased.”

[second law, Simple Wikipedia] and this

A relationship is a lot like a closed thermodynamic system. Starting off there is much potential for success, almost unbridled potential. You could have just found the person you were always meant to be with, and each new fact and intricacy of that person adds to that mystique. Entropy decreases.

With time, however, as in a closed thermodynamic system, entropy increases and heat dissipates. That's not to say that feelings do not get stronger, but the relationship can tend toward a sort of normalcy and complacency. The system needs an outside source of energy to push it onward and decrease entropy [see: entropy increase] once more.

But should that added, outside energy [see: coupling] be necessary? Is it worth the added energy to work toward something that will eventually even out once again? Or should people just accept the increased entropy, letting systems settle [see: equilibration] and relationships end?”

The cartoon is in the neighborhood of truth, in the sense of (a) entropy being “transformation content” in the original sense of the term; (b) love being a chemical reaction (see: love the chemical reaction); and (c) the condition for chemical equilibrium, meaning the reverse reaction (AB → A + B) (breakup) is equally favored as the forward reaction (A + B → AB) (formation), is that of maximal entropy, as first announced famously by German physical chemist August Horstmann in 1873.