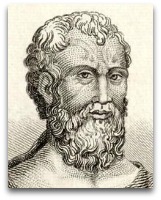 In existographies, Zeno of Citium (c.334-c.262BC) (IQ:170|#317) (Cattell 1000:859) [RGM:792|1,500+] (GPhE:#) (CR:44) was a Greek natural philosopher, noted for employing a determinism philosophy of action, particularly in regards to crime and punishment, and also the founder of stoicism, a philosophy which holds that the wise man should be free from passion, unmoved by joy or grief, and submissive to natural law and or one apparently or professedly indifferent to pleasure or pain.

Soul | Fire
Zeno, unique among soul theorists, proposed that the soul or mind was fire, or something to this effect; the following are representative quotes:

“Crates and Dicaearchus were of opinion that there was no soul at all, but that the body thus stirs by a natural motion; Plato, that it was a substance moving of itself; Thales, a nature without repose; Asclepiades, an exercising of the senses; Hesiod and Anaximander, a thing composed of earth and water; Parmenides, of earth and fire; Empedocles, of blood, e.g. "He vomits up his bloody soul" (Sanguineam vomit ille animam). Posidonius, Cleanthes, and Galen that it was heat or a hot complexion: “their vigor of fire and of heavenly race” (Ignens est ollis vigor, et coelestis origo). Hippocrates, a spirit diffused all over the body; Varro, that it was an air received at the mouth, heated in the lungs, moistened in the heart, and diffused throughout the whole body; Zeno, the quintessence of the four elements ["I know not," says Mr. Coste, ''where Montaigne had this; for Cicero expressly says that this quintessence, or fifth nature is a thought of Aristotle, who makes the soul to be composed of it; and that Zeno thought the soul to be fire.'' (Cicero, Tusc. Quaes, i.9). After this, Cicero adds, "that Aristotle calls the mind, which he derives from that fifth nature entelechia [entelechy], a new-coined word, signifying a perpetual motion." Though Montaigne has copied these last words, in what he proceeds to tell us of Aristotle, he censures him for not having spoken of the origin and nature of the soul. But had he only cast his eye upon what Cicero had said a little before, he would have been convinced that Aristotle had taken care to explain himself concerning the origin of the soul, before he remarked the effect of it If he has not thereby fully demonstrated what the nature of it is, Zeno has not given us much better light into it when he says, "the soul or mind seems to be fire''; and it would not be difficult to show that in this article the other philosophers have not succeeded better than Zeno and Aristotle]; Heraclides Ponticus, that it was the light; Zenocrates and the Egyptians, a mobile number; the Chaldeans, a virtue without any determinate form: “A certain vital habit in man's frame, which harmony the Grecian sages name” (Habitum quemdam vitalem corporis ease, Harmonium Grseci quam dicunt.) Let us not forget Aristotle, who held the soul to be that which naturally causes the body to move, which he calls entelechia [entelechy], with as cold an invention as any of the rest; for he neither speaks of the essence, nor of the original, nor of the nature of the soul, but only takes notice of the effect. Lactantius, Seneca, and most of the dogmatists, have confessed that it was a thing they did not understand. Heraclitus, who was of opinion that every being was full of souls and demons, did nevertheless maintain that no one could advance so far towards the knowledge of the soul as ever to arrive at it; so profound was the essence of it.”

“Zeno, according to Cicero, supposed the soul to be an igneous substance, from whence he concluded it destroyed itself.”

“Zeno held that the soul is fire. Zeno's doctrine of the elements, however, was such that in the first place he did not connect this fifth element, from which his predecessors thought sense and intellect were produced, with the four original constituents of things: for he postulated fire as that element which produces everything, both intellect and sense. Zeno and almost all of the Stoics regard the supreme god as aether endowed with mind, by which all things are ruled. Cleanthes, a disciple of Zeno, thinks that the sun rules and governs affairs. Zeno the Stoic says that the soul [ψυχη] has eight parts, dividing it into the governing part and the five senses, the power of speech and the generative power.”

God
In 45BC, Cicero, in his On the Nature of the Gods, had the following to say about Zeno’s views on god: [10]

“In now come, Balbus, to the philosophers of your school. Zeno proposes that the ‘law of nature’ is divine, with the power of enjoining what is right and of forbidding the opposite. How he lends life to this law—and we certainly require a god to be a living creature—we fail to understand. In other books, he states his belief that there is a kind of reason which pervades the whole of nature and is endowed with divine power. The same power he assigns also to the stars, and to the years and months and changing complexion of the years.”

“The stoics use the term ‘law of nature’, which they derive from Heraclitus, as an alternative title for Pronoia, Destiny, or Logos, the range of labels used to present the stoic god, which is the fiery pneuma directing the course of the world.”

“The universe, in Zeno's view, is god a divine reasoning entity, where all the parts belong to the whole. The universe, based on Heraclitean logic, contains a divine artisan-fire, which foresees everything, and extending throughout the universe, must produce everything. He defines nature by saying that it is artistically working fire, which advances by fixed methods to creation. For he maintains that it is the main function of art to create and produce, and that what the hand accomplishes in the productions of the arts we employ, is accomplished much more artistically by nature, that is, by artistically working fire, which is the master of the other arts.

This divine fire, or aether, is the basis for all activity in the universe, operating on otherwise passive matter, which neither increases nor diminishes itself. The primary substance in the universe comes from fire, passes through the stage of air, and then becomes water: the thicker portion becoming earth, and the thinner portion becoming air again, and then rarefying back into fire. Zeno, following Heraclitus, adopted the view that the universe underwent regular cycles of formation and destruction. The nature of the universe is such that it accomplishes what is right and prevents the opposite [what is wrong], and is identified with unconditional fate, while allowing it the free will attributed to it.”

Individual souls, according to Zeno, as summarized by Cicero, are part of the same fire as the world-soul of the universe. [5]

“But you should not punish me for stealing. The destiny of the ages, over which I have no control, has determined that I should steal.”

To which Zeno is supposed to have answered:

“The destiny of the ages, over which I have no control either, has also determined that I should beat you for it.”

This is what America physical organic chemist George Scott, a human molecular philosopher, calls physical determinism. He cites this anecdote of Zeno as the best known ancient deterministic system of philosophy. [2]

Stoicism
In 300BC, Zeno is credited with having founded the school of philosophy known as “stoicism”, named so in the 14th century from the Greek stoikos, literally, of the portico, from Stoa (Poikile) the Painted Portico, portico at Athens where Zeno taught, a philosophy holding that the wise man should be free from passion, unmoved by joy or grief, and submissive to natural law and or one apparently or professedly indifferent to pleasure or pain.

In 300BC, Zeno is credited with having founded the school of philosophy known as “stoicism”, named so in 14th century retrospect, from the Greek stoikos, literally, of the portico, from Stoa (Poikile) the Painted Portico, portico at Athens where Zeno taught, a philosophy holding that the wise man should be free from passion, unmoved by joy or grief, and submissive to natural law and or one apparently or professedly indifferent to pleasure or pain. [6]

Stoics were concerned with the active relationship between cosmic determinism and human freedom, and the belief that it is virtuous to maintain a will (called prohairesis) that is in accord with nature. [7]

Stoicism had a number of adherents, including Marcus Aurelius (121-180), lasting until 529 during which time emperor Justinian I (482-565) shut down all philosophical schools, so that Christianity would have no opposition. [8]

Atomic theory | Stoicism
The stoic philosophers, according French quantum chemist, quantum biochemist, and atomic theory historian Bernard Pullman (1998), gave the “clearest expression of opposition to the teachings of the atomists.” [9]

Quotes | By
The following are quotes by Zeno:

“Fate is the endless chain of causation, whereby things are; the reason or formula by which the world goes on.”

“The goal of life is living in agreement with nature.”

“Man seems to be deficient in nothing so much as he is in time.”

“All things are parts of one single system, which is called nature; the individual life is good when it is in harmony with nature.”