In religio-mythology, Zoroaster, in Greek (Ѻ), or Zarathustra, in Iranian mythology (Persian mythology), is an Iranian prophet figure, origin dated to c.1000 to 600BC, in Iran, whose period of worship is said to have begun with Cyrus the Great (c.600-530BC), which continues to be practiced by some in Iran.

Theban | Origins
The following shows the overlap in god-imagery between the Theban recension god Amen-Ra, aka “Neb-er-tcher” (Ѻ), as Muata Ashby calls him, aka the super "all-in-one" Egyptian god (Ra, Atum, Ptah, and Amen combined), and the Iranian prophet Zoroaster, and Cyrus the Great (600-530BC), founder of the Achaemenid Empire (First Persian Empire) (c.550-330BC) (Ѻ) a territory (Ѻ) controlling Egypt (past Thebes), the Palestine area, and half of India: [1]

Achaemenid Empire
In 550BC, Cyrus the Great (600-530BC) conquered much of the world, as shown below, and therein founded the Achaemenid Empire (First Persian Empire) (c.550-330BC) (Ѻ) a territory (Ѻ) covering Egypt (past Thebes), the Palestine area, half of India, and the land up to Greece:

Another rendition of the Achaemenid Empire is shown below, which highlights the so-called Babylonian exile of the people of Judea, which from 587 to 400BC, during which time, according to Gary Greenberg (2000), and others, the Jews, aka Is-Ra-El-ites (Israelites) absorbed Babylonian mythology into their own Egyptian mythology based Hebrew mythology, after which the Old Testament of the Bible was written: 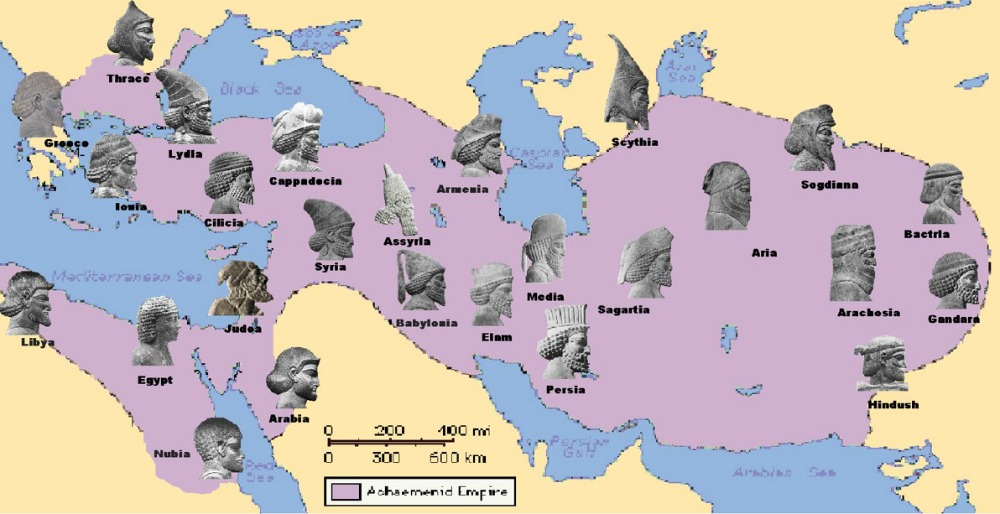 Judaism | Christianity | Islam
Zoroaster is oft-discussed (Ѻ) as a precursor to the Hebrew prophets, and a forerunner to the later figures of Jesus, Muhammad, and Buddha.

“The [Judeo-Christian] Cosmogony, that is, the account of the creation with which the book of Genesis opens, has been taken and mutilated from the Zend-Avesta of Zoroaster, and was fixed as a preface to the Bible after the Jews returned from captivity in Babylon, and that the Robbins of the Jews do not hold their account in Genesis to be a fact, but mere allegory. The six thousand years in the Zend-Avesta, is changed or interpolated into six days in the account of Genesis.”