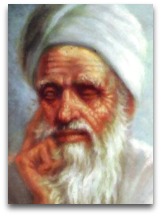 In existographies, Abdallah al-Marri (973-1057) (IQ:175|#233) (Murray 4000:3|AL) (FA:32) (CR:10), oft-cited as "al-Marri", aka the "Arab Lucretius" (Issa, 2016), was a Syrian-born blind philosopher, poet, skeptic, and irreligionist (Ѻ), historically “Arab atheist” (Ѻ), noted for his attacks on the dogmas of religion, his rejection of Islam, his sarcasm towards the religions of Jews, Christians and Zoroastrians, and his general view that religion consisted of ancient fables used to exploit the masses. (Ѻ)

Epistle of Forgiveness
Al-Marri’s Epistle of Forgiveness (Resalat Al-Ghufran), which in 2007, was banned by the Algerian Ministry of Religious Affairs, is so similar to John Milton’s Paradise Lost, that most of today’s educated Arabs either associate the two works; and in 1886 some were erroneously claiming that Milton borrowed from Epistle; moreover, in 1919, Spanish orientalists suggested that Danti’s Divine Comedy, used ideas from Al-Marri’s Epistle. [5]

Heretic | Ranking
In 14th century, al-Marri was classified as a top three heretic:

“The heretics in Islam are three: Ibn al Rawandi, Abu Hayyan al Tawhidi, and Abu Alaa al-Ma’arri–of them, mostly Abu Hayyan, because they (attempt to) edify grandiloquence but in fact they babble.”

Al-Marri is oft-compared to the following:

Quotes | On
The following are quotes on Al-Marri:

“It takes a keen mind [something Alfred von Kremer (c.1875) (Ѻ) lacked] to examine the language and style [of the poetry of Al-Marri] with sufficient closeness to detect the subtle manner in which the poet at once disguises and proclaims his unbelief in the Mohammedan or any other revealed religion. Al-Marri contemplates life with the profound feelings of Lucretius and is like Lucian.”

“Al-Marri is one of the great doubters of all time.”

Quotes | Intelligence
The following are al-Marri quotes on intelligence:

“If a man of sound judgment appeals to his intelligence, he will hold cheap the various creeds and despise them.”

Quotes | By
The following are quotes by al-Marri:

“Young men grow up in the belief to which his father has accustomed him. It is not reason that makes him religious, but he is taught religion his next of kin.”

“They recite their sacred books, although the fact informs me that these are fiction from first to last. Reason alone speaks the truth.”

“The sacred stones in Mecca, visited and touched with hands and lips, are stones that were once kicked.”

“Had they been left alone with reason, they would not have accepted a spoken lie; but the whips were raised to strike them down. Traditions were brought to them, and they were bidden to say, ‘we have been told the truth’, and if they refused, the sword was drenched in their blood.”