In religion, astro-theology, "astronomical mythology" (Massey, 1907) or “stellar theology” (Sayce, 1913), is religion based on the identification of gods with stars, star constellations, or planets.

Orion | Sah | Osiris | Jesus
In 2287BC, in the Pyramid Texts of Pepi I, Osiris was being associated with the Orion star constellation, the dying and rising pharaoh (or hunter):

“Hail, O King! Thou art this great star, the bearer of Orion, who ferries the ship of heaven with Orion, who rows the ship of Dewat with Osiris. The king goes forth from the eastern part of heaven, reinvigorated in his season and fresh in his time. Nut gave birth to this King together with Orion. The Year (?) has adorned thee together with Osiris.”

Osiris, at some point, before or after this, was synced with the god Sah.

The following shows an astro-theological detail from the tomb of Seti I (c.1275BC), the vault above the sarcophagus, the bull said to correspond to what is now called the "Great Bear" constellation, the others, supposedly being a mystery: [8] 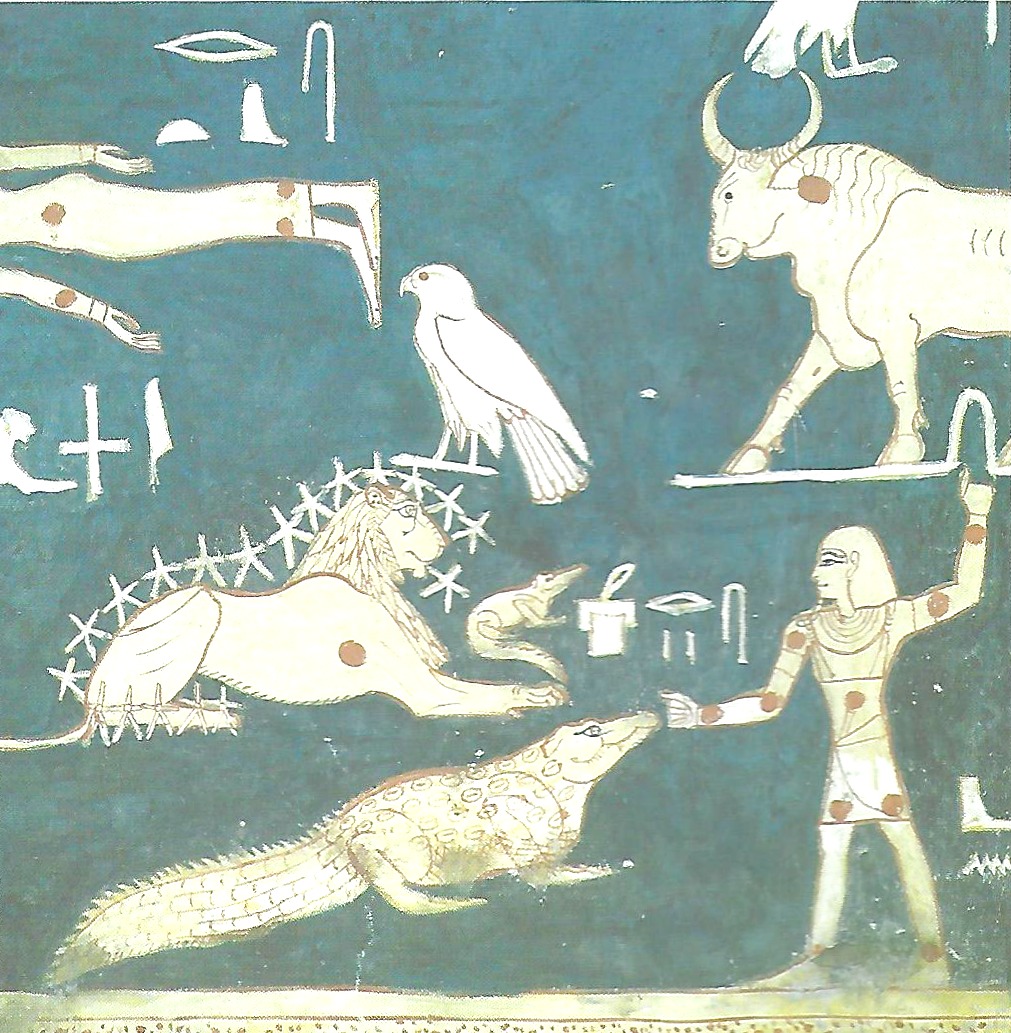 Plutarch
In 100AD, Plutarch summarized the main astrological ideas of the Egyptian gods as follows:

“The Egyptians give to Osiris the title of general, and the title of pilot to Canopus, from whom they say that the star derives its name; also that the vessel which the Greeks call Argo, in form like the ship of Osiris, has been set among the constellations in his honor, and its course lies not far from that of Orion and the Dog-star; of these the Egyptians believe that one is sacred to Horus and the other to Isis.”

In 2004, Philip Coppens, in his The Canopus Revelation: Stargate of the Gods and the Ark of Osiris, devoted considerable time to discussion of the relation between Osiris and Canopus (Ѻ), the second brightest star in the sky. [7]

Derham | Usage
In 1713, English physicist and theologian William Derham gave a series of Boyle lectures, an anti-atheism anti-deism annual lecture series established by the will of Robert Boyle, on what he called “Physico-Theology” on the subject of a watchmaker like astronomy analogy as proof of the Christian religion against atheists and other notorious infidels, in the context of newly emerging natural philosophy. [1] In 1714, Derham, in follow up to the latter, published Astro-theology: a Demonstration of the Being and Attributes of God: From a Survey of the Heavens, a simplified summary of new telescope observations, e.g. the movement of the spots on Mars and Venus, the gist of which being to outline a teleological argument, similar to the watchmaker analogy, for god’s existence. [2] This Derham usage, according to Oxford English Dictionary, is the earliest use of the term “astro-theology”. The Derham usage, however, is but not defined in the modern proper pro-atheism sense of the term, as theology based on star or planet movement and or star cluster geometry.

Sun | Atum | Ra | Brahma | Abraham
In pre-dynastic Egypt, the sun was personified by a number of supreme gods, including: Ra, Atum, Aten, and Horus. During the Heliopolis recension (see: recension theory), Ra and Atum were syncretized as the god Atum-Ra. In Hinduism (900BC), Ra became Brahma. In Judaism (500BC), Ra became Abraham. In Christianity (300AD), Horus, the sun of Ra (or the sun of Osiris, depending on text), conceptualized as the early-day sun, became Jesus the son of god. [3]

Massey
In 1881, Gerald Massey began publishing his works on religio-mythology; some of which, supposedly, containing star or sun based discussion. In 1900, Massey published "The Historical Jesus and the Mythical Christ". In 1970, Jordan Maxwell read this, becoming inspired by it, and in 2000 re-published it under the title "Astro-Theology". [6]

Sah and Sopdet were later syncretized with the gods Osiris and Isis, respectively, as follows:

The star named “Sothis”, e.g. as mentioned in Pepi I Pyramid Texts (Ѻ), of note, seems also to be name variant of the star Sirius. (Ѻ)

Budge, in his The Gods of the Egyptians, Volume One (pgs. 487-88), in commentary of Heru-Sa-Ast-Sa-Asar, i.e. “Horus, son of Isis, son of Osiris”, the 14th form of Horus, according to Budge order, reformulated as Apollo by the Greeks (500BC) and Jesus by the Romans (300AD), stated the following about the Passion of Osiris: [3]

“Soon after the birth of her child she was persecuted by Set, who kept herself and Horus prisoners in a house, but by the help of Thoth she escaped with her child one evening, and set out on her way under the protection of seven scorpions called Tefen, Befen, Mestet, Mestetef, Petet, Thetet, and Matet. These scorpions probably represent the seven stars of the constellation Canis Major, in which the stars of Isis [Sirius] and Sothis were situated. The last three scorpions showed Isis the way and led her to the town of Crocodilopolis, and then on to the city of Thebti, the city of the Two Sandals-Goddesses, where the swamp country begins.”

Recent
In 1913, Archibald Sayce, in his The Religion of Ancient Egypt, argued for a parallelism of the "stellar theology" of Babylon and Egypt, both countries absorbing popular star-worship into the official pantheon of their respective state religions by identification of gods with stars or planets. [4]

In 1959, Jordan Maxwell began to engage in free-thinking religious decoding. In 1970, Maxwell read Gerald Massey's "The Historical Jesus and the Mythical Christ", therein gleaning the idea of "astro-theology". [6] In c.2000, Maxwell published a DVD entitled Astrotheology: the Root of all Religion. (Ѻ) In 2010, segments of Maxwell’s talk on “astrotheology” at the Republic Forum began to appear on YouTube (Ѻ), wherein he commented his astrology-like view that the “stars effect people” and digressed on Biblical astrotheology decodings, such as that in Job 38:32 (Ѻ), which says: “Canst thou bring forth Mazzaroth [Zodiac] in their time? canst thou also guide [The North Star with those that are about him] Arcturus with his sons?”

In 1999, Dorothy Murdock was publishing ideas on the zodiac in relation to modern religion. In 2004, Murdock published Suns of Gods, which she considered as a PhD thesis on comparative religion and astrotheology. [5]

In 2009, bloggers were referring to the "main astrotheologists" as: Jordan Maxwell, Michael Tsarion, and Dorothy Murdock along with Zeitgeist references to it. (Ѻ)

In 2014, Wayne Herschel, author of The Hidden Records: the Star of the Gods, in his video “Senmut Tomb Tablet Reveal: Christmas Tree Egyptian Origin” (Ѻ), showed how the “leg of the bull” Egyptian symbol is the Pleiades constellation:

Other
The is some conjecture (Ѻ) that the Big Dipper, according to the Egyptians, supposedly, was thought to be the torn off “leg of Set” following is battle with Horus:

“The constellation of Isis is called, by the Greeks, Canis Major; that of Horus, Orion; and that of Typhon, Ursa.”

— Plutarch (c.110AD), De Iside et Osiride (pg. #); cited by John Narrien (1833) in Origin and Progress of Astronomy (pg. 44); cited by Bal Tilak (1893) in The Orion: Researches into the Antiquity of the Vedas (pg. 103) who also states: Narrien further observes that this assertion of Plutarch seems to be confirmed by the discovery of a sculptured planisphere on the ceiling of the Temple of Denderah where “in the place of Canis Major is traced a cow, the animal consecrated to Isis and instead of Orion is the figure of man which is supposed to be intended for the son of Osiris”