In science, a barometer (TR:31) is a device or instrument, no matter how is works, that measures the pressure of the atmosphere (see: atmospheric pressure), in a strict sense (Middleton, 1964), or "pressure" in a general sense. [4]

Overview
In 1643, Evangelista Torricelli, during his investigation of possible existence of vacuums in nature, in respect to Galileo's "pump problem" (c.1640), inverted a tube of mercury into a bowl of mercury, and therein found that a vacuum was created at the top of the tube, which was the first disproof of the nature abhors a vacuum postulate, tracing back to Parmenides (485 BC). A depiction of Torricelli’s experimental device is shown adjacent, and it is now known as the barometer or “meter” for measuring pressure. [2]

In 1648, Blaise Pascal conducted an experiment, in continuation of Torricelli's work, wherein he had someone carry a Torricelli vacuum up a mountain and recorded the changes in the height of the vacuum at the top: 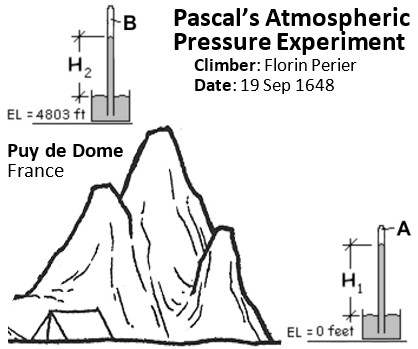 In c.1660, Otto Guericke, independent of Pascal and Torricelli, used a vacuum pump and a two copper globe like device (see: illustration IX) to make water rise in a glass tube, during the course of which one of his onlookers asked “how high will it make the water go?”, in response to which Guericke tested this question by attaching a four story tube to the side of his home (see: illustration X), finding that it would only rise a little past the third story or “19 Magdeburg cubits”. Moreover, when the experiment had been set up for several days, he recorded that it varied in height, on certain days, as follows: [3]

“Afterwards, however, when this experiment had been set up for several days, I saw some variation from one day to the next. Sometimes, the water was the width of one hand or two or three higher than before, and sometimes that amount lower. I could not explain the reason for this.”

Here, then, we have the first account of daily change in barometric pressure. Guericke, of note, had already deduced that it was the weight of the atmosphere that produced the perceived nature abhors a vacuum phenomenon, and also stated that at a certain height upwards, where the earth’s atmosphere ends, that pure space would begin in the form of a complete vacuum. Here, however, we see him perplexed at the daily atmospheric variation.
Naming
In 1663, Robert Boyle, in his New Experiments and Observations Touching the Cold, was using the term “barometer” in reference to “mercurial cylinder” measured up to 29 or 30 inches. [4]

In 1665, Henry Oldenburg, the publisher of the Royal Society transactions, printed the following note:

“Modern philosophers, to avoid circumlocutions, call that instrument, wherein a cylinder of quicksilver, of between 28 to 32 inches in altitude, is kept suspended after the manner of the Torricellian experiment, a ‘barometer’ or ‘baroscope’.”