In terminology, being refers to the quality or state of having existence (e.g. human existence). [1] The term being is often associated with “conscious existence”, life, or the qualities that constitute the essence of a living thing. [2] The term is often found in conjunction with the word human, as in “human being”, implying both the anatomical, physiological, and psychological structure, but also whatever may constitute the essence of the individual.

Shakespeare
English author William Shakespeare's famous "to be or not to be" query seems to well-capture the gist of the modern person's notion of being, in the sense of a term captures or embodies one's theory of existence. The following is the first quarto's version of the speech of William Shakespeare’s famous Hamlet quote:“To be or not to be, I there’s the point, to die, to sleep, is that all?”, which amounts to a frank and straightforward query about the point of existence, and seems to exemplify what most modern people associate with the term "being". [4] 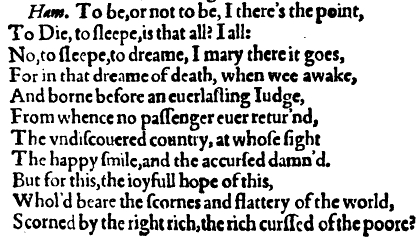 Russian-born Israeli chemical engineer Alec Groysman comments on this logic thermodynamically in his 2004 article “Aesthetic, Philosophical and Historical aspects in the Physical Chemistry education”, where he states: [2]

which seems cogent, being that Gibbs free energy, according to Erwin Schrodinger (What is Life?, 1944), is the subject one is supposed to turn to if one is to understand, supposedly, what life is in terms of chemistry and physics.

Teilhard
In a short essay titled ‘Action and Activation’, French philosopher Pierre Teilhard gives an excellent definition of life in relation to being. In particular, being, in metaphysics, Teilhard states “can be defined with a precision that is geometric in type”; energy, however, presents itself to the physicist as a magnitude that is still open to all sorts of possible corrections or improvements.” In relation to the combined mechanism of activation, being, and energy, Teilhard reasons that: [3]

“One of the most distinctive characteristics of living substance in action is undoubtedly the predominate importance assumed in it by the fact of being (or of not being) appropriately responsive to a stimulus and stimulated.”

Here we see Teilhard attempting to frame out the concept of "being" in a pure physical-chemical perspective.

Zerotheism
In 2015, Libb Thims, during the "Zerotheism for Kids" lecture, to note, similar to the Odilie Watson example, illustrated above, had difficulty explaining to the children, aged 6 to 11, what a "being" was, as the term was brought up towards the end of the lecture on the topic death, history of theories of the soul, in relation and the Parmenides vs Heraclitus debate on being continuity vs the existence of the void.

“Being is unbegotten, indestructible, whole, eternally one, immovable and infinite. With it there is no was nor shall be; the whole is forever now, one and continuous.”

“Belief is half of being.”