“You clearly can be a scientist and have religious beliefs. But I don’t think you can be a real scientist in the deepest sense of the word because they are such alien categories of knowledge.”

— Peter Atkins (1997), commentary the results, shown adjacent, of the 1998 Larson-Witham study on belief, in the existence of god among leading US scientists [4]

Overview
Scientists, in general, tend to be very taciturn and reticent in regards to discussion of belief system or belief state, in respect to religion and religious belief. The following table (and adjacent graph) shows percent belief in the existence of god by leading US scientists and general or randomly selected US scientists, in the years shown, based on a combination of the 1914 and 1924 pollings of 1,000 randomly selected US scientists and 400 ‘greater’ scientists, conducted by American psychologist James Leuba (1867-1946), and the similar 1996 and 1998 studies, conducted by Americans science historian Edward Larson and Larry Witham, of randomly polled US scientists and a portion of the over 2,000 members of the National Academy of Science (NAS): [3]

The data shows that while about 38 percent of general or randomly polled scientists, on average, in the 20th century, believed in the existence of god, levels remaining about constant, give or take, belief in the existence of god by ‘leading’ scientists is on the decrease, where currently fewer than 5% of NAS members believe in the existence of god, which is in marked contrast to the general public, of whom over 95% believe in either in god (83%) or a universal spirit or higher power (12%), according to 2009 PewResearch polls, elaborated on in more detail below, the "scientists" in question here being a selection of more than 2,500 scientists surveyed who are members of the American Association for the Advancement of Science (AAAS); other results from this poll are shown below—as well as a summary of the main results of the Larson-Witham study (1998) in table 1 (below left): [6] 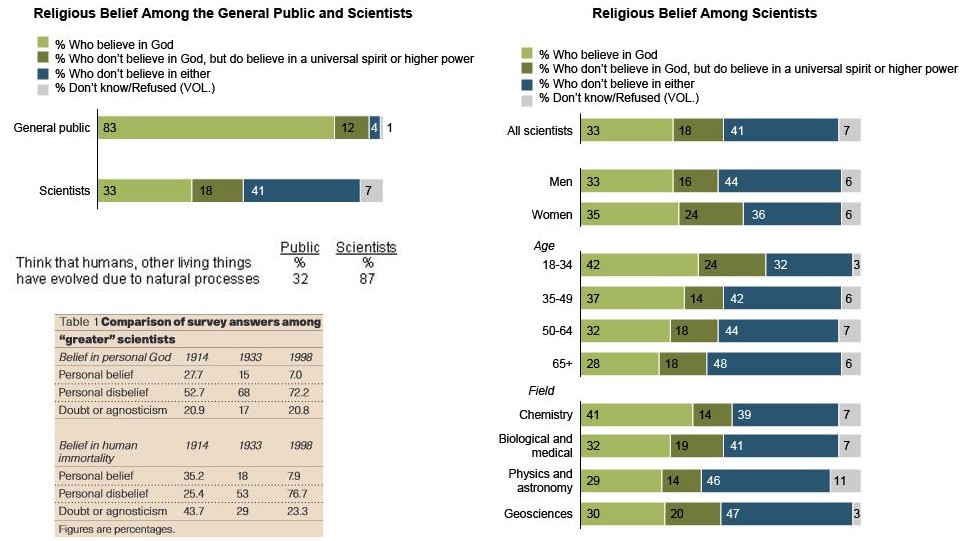 Royal Society | Belief polls
In 2015, Michael Ruse, in his Atheism: What Everyone Needs to Know, Ruse, chapter “The Matter of Science”, opens to the following 2005 poll results of a query of 1,074 members of the Royal Society, of which 253 responded (243 male, 10 female), with the following four questions (results shown): [7] 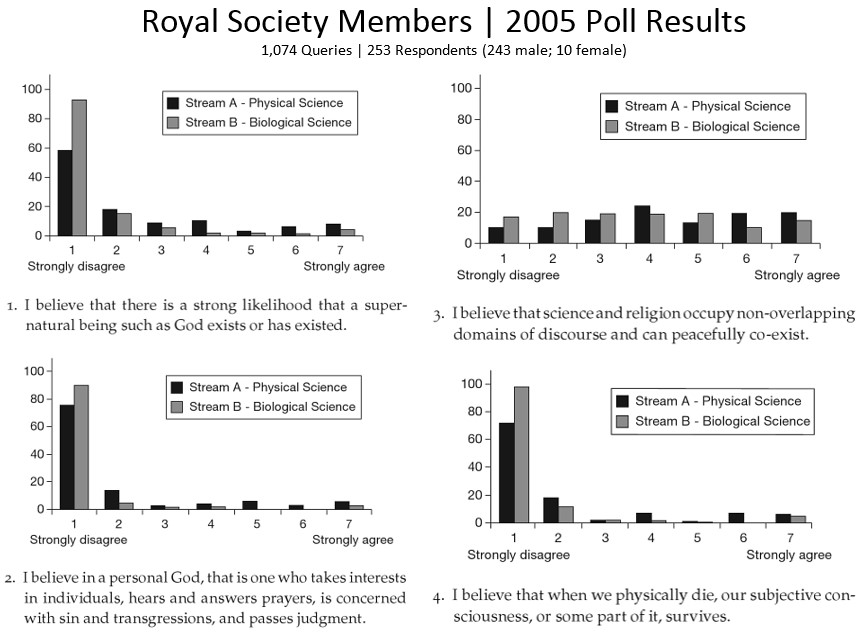 Ruse then compares these results to the 1996 and 1998 studies, conducted by American science historians Edward Larson and Larry Witham, of randomly polled US scientists and a portion of the over 2,000 members of the National Academy of Science (see: belief in the existence of god by scientists). He then mentions the Napoleon Laplace anecdote, wherein Pierre Laplace (1802) dismissed god with a wave of the hand; after which he the he attempts to elaborate on the point that the atheism controversy is not just a matter of the facts, but a matter of "burning moral concern", both about the stand one should take on the issues and the consequences of one's commitment.

In 1802, the first semi-systematic polling of scientists, in regards religious belief, was conducted beginning by French emperor Napoleon Bonaparte who seemingly went around and polled and queried all of the leading scientists of France—one of which resulted in the famous Napoleon Laplace anecdote, during which time Pierre Laplace told Napoleon that he had no need of the "hypothesis of god" in his formulation of celestial mechanics.

In 1812-1816, a famous dialog occurred between Napoleon and Gaspard Gourgaud (1783-1852) , a general baron and Napoleon’s personal assistant, during which time Gourgaud gave his opinion that staring up at the starry heavens leads one to an amazement and wonder in the greatness of God, which provoked the following dialogue: [1]

Bonaparte: “How comes it, then, that Laplace was an atheist? At the Institute neither he nor Monge, nor Berthollet, nor Lagrange believed in God. But they do not like to say so.”

Gourgaud: “I own that I believe firmly in God, and cannot conceive how men can be atheists. To proclaim themselves such seems to me mere mental braggadocio.”

Bonaparte: “Bah! Laplace was an atheist, and Berthollet too. At the Institute they all were atheists, and yet Newton and Leibnitz were believers. Atheists compare man to a clock; but the clock-maker is a being of superior intelligence. They grant that creation is the result of matter, as warmth is the effect of fire.”

In 1817, similarly, Napoleon commented the following to Gourgaud: [1]

“I often asked Laplace what he thought of God. He owned he was an atheist. Many crimes have been committed in the name of religion. The oldest religion is the worship of the sun [Ra theology]. Where is the soul of an infant? I cannot remember what I was before I was born; and what will become of my soul after my death? As to my body, it will become carrots or turnips. I have no dread of death. In the army I have seen many men suddenly perish who were talking with me.”

See main: Edison on the soul

In 1910, American inventor Thomas Edison, in an interview with Edward Marshall of The New York Times, famous gave his frank and open views on religion and his religious beliefs, which were pretty much in alignment with those of Bonaparte, albeit Edison elaborates greatly in giving his opinion on the hypothesis of the soul, in relation to force and energy, being a mere speculative theory, that is not completely understood, say the way savages used to consider fire divine: [2]

Edison: “I cannot believe in the immortality of the soul. Heaven? Shall I, if I am good and earn reward, go to heaven when I die? No – no. I am not ‘I’ – I am not an individual – I am an aggregate of cells.”

Edison: “No, all this talk of an existence for us, as individuals, beyond the grave is wrong. It is born of our tenacity of life—our desire to go on living—our dread of coming to an end as individuals. I do not dread it, though. Personally I cannot see any use of a future life.”

Edison: “Soul? Soul? What do you mean by soul? The brain?”

Feynman | Lectures
In 1963, American physicist Richard Feynman gave a set of lectures entitled “A Scientist Looks at Society”, latter published as The Meaning of It All: Thoughts of a Citizen Scientist, where he states his opinion that that more than half of the scientists do not believe in their father's god: [5]

“I do believe that there is a conflict between science and religion, religion more or less defined that way. And in order to bring the question to a position that is easy to discuss,
by making the thing very definite, instead of trying to make a very difficult theological study, I would present a problem which I see happens from time to time. A young man of a religious family goes to the university, say, and studies science. As a consequence of his study of science, he begins, naturally, to doubt as it is necessary in his studies. So first he begins to doubt, and then he begins to disbelieve, perhaps, in his father's god. By ‘God’ I mean the kind of personal god, to which one prays, who has something to do with creation, as one prays for moral values, perhaps. This phenomenon happens often. It is not an isolated or an imaginary case. In fact, I believe, although I have no direct statistics, that more than half of the scientists do not believe in their father's god, or in god in a conventional sense. Most scientists do not believe in it. Why? What happens? By answering this question I think that we will point up most clearly the problems of the relation of religion and science.”

Feynman, unlike Edison, remained the epitome of the reticent and taciturn scientist, in regards to religious questions and his own beliefs, always dancing around the subject, but never being forthcoming.

Thims | Dawkins number
In 2009, American electrochemical engineer Libb Thims began using the Dawkins scale as a tool to probe scientists about his or her belief in the existence of god, by directly asking them what their Dawkins number (DN) is? This gets belief query methodology tends to dig a little deeper and get beyond the above yes/no or unsure dichotomy. Many Hmolpedia biographies, as of 2014, have been labeled per Dawkins number (DN=#), self-estimated and or gauged per published commentary.