In science, biophysical economics is []

Terminology | Issues
The term "biophysical economics", itself coined by Alfred Lotka (1925), as discussed below, is rooted in the divided usage of the terms "biophysics", also coined by Lotka, meant as a synonym of physiology or the physics "inside" of a so-called biological entity or bio-organism, as distinguished from the older term "physical biology", coined by Walter Porstmann (1886-1959), in his “A Problem from the Physical Zoology: influence of Physical Moments on the Shape of the Fish” (1915), who argued for the need for a new science of physical zoology and botany, along the lines of physical chemistry. The underlying inherent vexing issue in all of this, as outlined by Lotka, in his "Regarding Definitions", is that chemistry and physics or physical chemistry in particular do not recognize the prefix term "bio-" (i.e. life); though Lotka could not find resolution to the problem, he did speculatethat the term “life”, in time, may become “wholly unnecessary” in the literature of exact science; in his usage, he continues to use life-laden terms “as a matter of convenience”, but notes, throughout his Elements, that such usage no way undermines the argument of his “Regarding Definitions”, the gist of which being that attempts to defined “life” via physics or chemistry is a hunt for the Jabberwock, i.e. something that results in fictional nonsense.

Lotka
The origin of biophysical economics originated in the work of Alfred Lotka, specifically his Elements of Physical Biology (1925), in his §§: Networks of Chains of Interrelated Species”, of his §10: Analysis of the Growth Factor, building on his food chain models, he introduces network chains, as follows:

“The relation between man and the domesticated species of animals and plants on which he so largely depends for food, in the present state of civilization, is only a particularly tangible, a particularly accessible example of an intricate network of relationships that connect more or less closely all living species. In this network each species or component is interlaced, like a link in a meshed coat of mail, with other species, which in turn connect with still others, and so forth. In our effort to get some sort of mental grasp of the complicated interlocking of these elements we seize upon some one link, some one species or component, and we note, first of all, that whatever is eliminated from one component of a self-contained system must pass into one or more other components of the system. So, for example, the component Si may be a herd of cattle. The matter eliminated from this component goes in part as food to build up or sustain a human population; in part it goes as fertilizer on the fields to furnish nutriment for crops; still other parts are worked up into various industrial products, such as leather, glue, etc. We thus have, in schematic representation:

On the other hand, the substance of the herd itself is recruited from certain other components of the system, grass, clover, corn, etc., so that we may further develop the scheme: 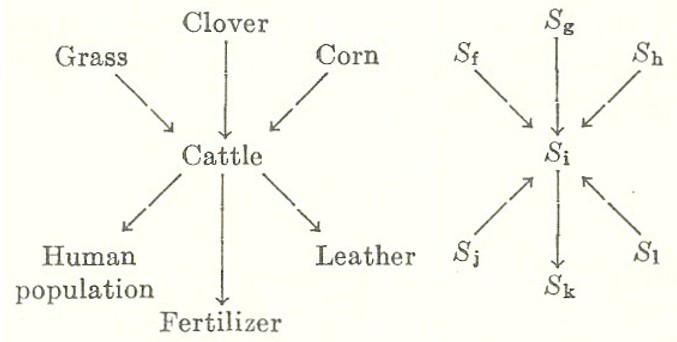 He then further elaborates on a "rate of growth" equation derivation; after which he coins the term “biophysical economics” as follows: [1]

“The restriction of this remark to the human species must not be taken to imply that there is in this feature something wholly peculiar to man, but rather, that underlying our economic manifestations are biological phenomena which we share in common with other species; and that the laying bare and clearly formulating of the relations thus involved. In other words, the analysis of the biophysical foundations of economics is one of the problems coming within the program of physical biology.”

The assertion here, according to Lotka, at this point, is that a fundamental connection exists, amenable to differential equation formulation, connecting food chains and or like or akin "economic chains", in connective human-animal networks such as grass-cattle-fertilizer-leather and human population. The second usage of the term biophysical economics, discussed by Lotka, is as follows:

“On the mistaken identification of prices and related economic quantities with the intensity factor of an energy, some authors, namely: Georg Helm (1877), Leon Winiarski (1900), Wilhelm Ostwald (1909, 1913), Emil Budde (1902) (Ѻ), and Julius Davidson (1919), have sought to build a system of biodynamics (social dynamics). The analogy which certain conjugate parameters of the perfectly general kind bear to intensity and capacity factors of an energy [see: intensive vs extensive] present the opportunity for such efforts, which are, in themselves, well worthwhile. But it must not be forgotten that the result of such efforts can be only a species of quasi-dynamics, something analogous to, but not identical with, the dynamics of physical forces. We may speak of the rent per unit area that the representative individual is willing to pay as a measure or at least an index of the ‘population pressure’. Now this population pressure this willingness to sacrifice effort for the sake of gaining elbowroom is present quite independently of our peculiar method of expressing it in terms of rent. It exists also among other species, though we may lack so convenient a gauge for it as we have, in our own case, in rent. We shall see later how at least a quantitative conception of such biophysical (economic) entities as population pressure and the like can be gained on a general basis, which applies to species other than human.”

Here, Lotka, via the mentioned citations, and discussion of population pressure and conjugate variables, is getting into a deeply entrenched rabbit hole of intellectual fortitude, e.g. Winiarski, Ostwald, Helm, and Davidson are each high ranking social Newtons; this one bulk citation is one of the core anchors of his entire book. He then, goes into a social ideal gas law derivation attempt, the first of its kind, historically speaking. Lastly, his discussion of the conjugate variables of area/rent and population pressure, gets into the deeper problem of what Paul Samuelson and his equation 133 problem.

Others
Others to expand on Lotka, and or to have elaborated biophysical economic ideas similar to his at about the same time, according to Cutler Cleveland (2010), as reviewed by Robert Costanza, include the following thinkers: Frederick Soddy (Cartesian Economics, 1922), Howard Scott (Technocracy, 1930s), Fred Cottrell (Energy and Society, 1955), and Howard Odum (Environment, Power, and Society, 1970). [2]

In 1970, American biologist-zoologist Charles Hall completed his PhD in systems ecology under Howard T. Odum at the University of Carolina

In 2008, Hall began to organize the first biophysical economics conferences.

In 2012, Eric Zencey, at the 4th BioPhysical Economics Conference, gave a talk on “Energy as Master Resource”. [3]