In engineering, cannon is a hollowed barrel-like device that uses combustion or heat to fire or impel a projectile, typically a large iron ball.

Overview
In c.1495, Leonardo da Vinci designed an upside-down cannon barrel (see: gunpowder engine), fitted with a piston, as sketched by him below (left), which had a rod attached to the bottom of the piston, which he stated could be used to lift a weight of large size, if gunpowder was ignited inside the cannon, therein consuming the oxygen inside of the working body volume, thereby making a vacuum, which, owing to the force of the atmospheric pressure, would lift the weight: [3] 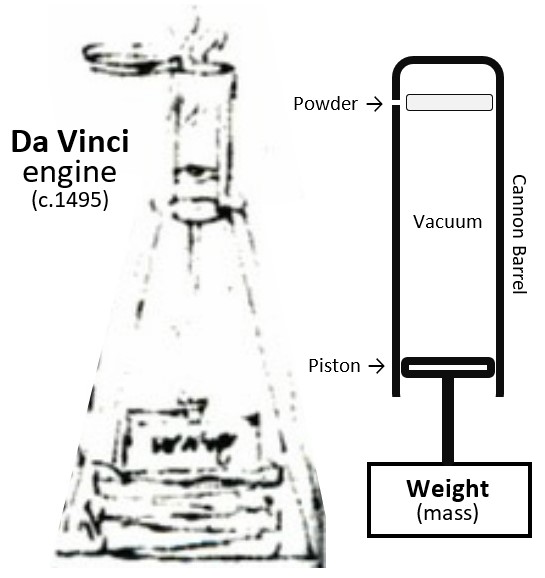 In c.1650, Edward Somerset took a cannon, and filled it 3/4th full of water, sealed it, and boiled it for 24-hours, until it burst with great explosion. A few years later, he was able to make an engine, that raised water by means of fire, which he attached to the side of his castle. [3]

In 1673, Christiaan Huygens made a gunpowder engine that could lift a weight using a cannon.

In 1699, Guillaume Amontons, in his “Method of Substituting the Force of Fire for Horse and Man Power to Move Machines”, supposedly, pointed out that the “cannon” was a type of heat engine, or “fire engine”, that could be used to move machinery. [2]

“The combustion engine, in the form of a cannon, is the oldest form of heat engine.”