In terminology, cause and effect refers to the phenomenon, i.e. "causality", wherein an antecedent, i.e. cause, seemingly produces a consequence, i.e. effect.

Adams
In 1889 to 1891, Henry Adams published his nine volume History of the United States of America, supposedly, for no other reason than to prove to his own satisfaction that causality or cause and effect exists in the course of history: [1]

“Historians undertake to arrange sequences,—called stories, or histories,—assuming in silence a relation of cause and effect. These assumptions, hidden in the depths of dusty libraries, have been astounding, but commonly unconscious and childlike; so much so, that if any captious critic were to drag them to light, historians would probably reply, with one voice, that they had never supposed themselves required to know what they were talking about. Adams, for one, had toiled in vain to find out what he meant. 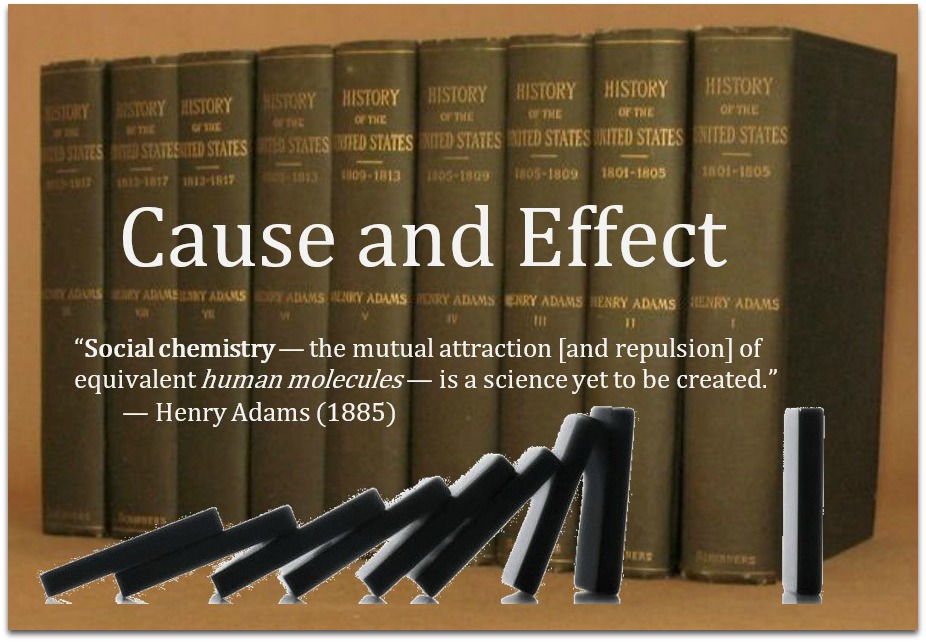 He had even published a dozen volumes of American history for no other purpose than to satisfy himself whether, by severest process of stating, with the least possible comment, such facts as seemed sure, in such order as seemed rigorously consequent, he could fix for a familiar moment a necessary sequence of human movement. The result had satisfied him as little as at Harvard College.

Where he saw sequence, other men saw something quite different, and no one saw the same unit of measure. He cared little about his experiments and less about his statesmen, who seemed to him quite as ignorant as himself and, as a rule, no more honest; but he insisted on a relation of sequence, and if he could not reach it by one method, he would try as many methods as science knew. Satisfied that the sequence of men led to nothing and that the sequence of their society could lead no further, while the mere sequence of time was artificial, and the sequence of thought was chaos, he turned at last to the sequence of force; and thus it happened that, after ten years’ pursuit, he found himself lying in the Gallery of Machines at the Great Exposition of 1900, his historical neck broken by the sudden irruption of forces totally new.”

Henderson
In the 1910s, Lawrence Henderson, in his The Fitness of the Environment (1913) and The Order of Nature (1917), began to contrast “cause-and-effect” analysis with reaction states and system view analysis, generally siding with the latter over the former; other view statements on this are as follows:

In 1935, Henderson, in his Pareto’s General Sociology: a Physiologists Interpretation digressed on this further.

In 1938 to 1942, Henderson, in his his "Sociology 23" course, devoted a certain amount of time trying to connect or or visually depict Vilfredo Pareto's version of Le Chatelier's principle via a "box spring model" (see: social Le Chatelier principle), particularly on pages 137 to 143 of his "Sociology 23 Lectures", the diagram of which shown adjacent; with which he attempt to argue that in the "system" view of (a) changes from state one to state two to state three and (b) each person interconnected to each other via spring-like forces or bands, that cause and effect analysis becomes usurped, or obviated, in some sense; the following are example statements on this line of reasoning: [2]

“A correlation between two things is observed, say, values of the pressure and of the volume of a gas. A simple algebraic expression for this correlation is then found, in this instance Boyle’s law, PV = k. One is then tempted to say that pressure is the cause that a gas has a certain volume. But reasoning from this cause, or from Boyle’s law, may lead to conclusions that are misleading and altogether useless, because temperature and volume are mutually dependent, and likewise of course temperature and pressure.”

“In a social system, and, as a rule, elsewhere, an action initiated in a certain thing leads to modifications everywhere in the system, and these modifications to further modifications which involve the very thing in which the process originated. So it is both ‘cause’ and ‘effect’. Moreover, the notion that the process originated at a certain point is, as often as not, no better than the legal fiction that it is sometimes actually as in the law courts, when it becomes necessary to somehow fix responsibility for a chain of event and there is no objective test, but only a perhaps ambiguous legal convention for doing so. Thus, reasoning from cause to effect in the study of concrete phenomena is often more misleading than more general reasoning of the same kind.”

“The misleading action of cause to effect reasoning is particularly true of the interactions of men. Thus, thousands of pages have been written about the causes of the war of 1914 to 1918. But there is no agreement about these causes, or about when or where they originated or about the chains of events that they initiated. And there can be none.”

“An enduring change in a social system, say, a change of form of government or, not infrequently, an apparently less important change like the change of a law or of a technological process may involve a change from one state of equilibrium of the social system to a very different state. The changes of the system somewhat resemble the changes observed in a game of cat’s cradle.”

Similar arguments, to note, are found in his earlier books; the subject of which requires further digestion.

Beard
In 1936, Charles Beard, similar in some sense to Henderson, in his The Devil Theory of War: an Inquiry into the Nature of History and the Possibility of Keeping Out of War, gave the following argument: [6]

Beard's aim in arguing here, as summarized by Morris Zucker, is to fortify his rejection of the "wicked person" or impersonal "forces" theories of the cause of World War I (1914-1918), and to scorn, supposedly, the utopian forever peace theorists. [7]

“The modern scientist is unwilling to depart from the test of causal relation or quantitative sequence. When he asks the question, Why? he insists on an answer in terms of cause and effect. He wants to reduce his solution of all problems to terms of the conservation of energy or the persistence of quantity.”

“Our behavior should be motivated by the ever-present realization that human beings in their thoughts, feelings and actions are not free agents, but are subject to the inexorable laws of cause and effect as are the stars in their courses.”

“A physical object is something which stays put unless something else starts it going, whereas an animal is something which under any circumstances does what it pleases. Isn’t a man a living creature and cannot he do pretty much as he pleases? … Heretofore, even if man entered somewhat into the matter, at least a given cause under a given set of conditions always produced the same effect. But along came Heisenberg with his principle of indeterminacy and apparently destroyed the pure and inevitable relations of cause and effect. On the analytical level of the laboratory, the mind sees things as determined. But in human behavior, in our daily lives, the decision is not simple. To his own mind, the behavior of a man seems to be free and of his own choosing, and all the accumulated moralities of the world exhort him to choose the good and to act righteously on the assumption that he is capable of free choice and action.”

“Choice is an illusion created between those with power and those without. The ‘why’ is the source of power. You see there is only one constant. One universal. It is the only real truth: causality. Action, reaction. Cause and effect. ... Please, ma cherie, I told you, we are all victims of causality. I drank too much wine, I must take a piss. Cause and effect.”