Overview
In 3100BC, crux star configuration was known to the Egyptians and Ancient Greeks due to the fact that it can be seen from southern Egypt; Ptolemy, incorrectly, regarded it as part of the constellation Centaurus. The crux entirely visible as far north as Britain in the fourth millennium BC. However, the precession of the equinoxes gradually lowered its stars below the European horizon, and they were eventually forgotten by the inhabitants of northern latitudes. By 400AD, most of the constellation never rose above the horizon for Athenians.

The southern cross points directly to the north pole, which is why, among seafarers, it was the most famous of all constellations of the south. (Ѻ)

To see the crux, presently, one has to be south of the Tropic of Cancer, wherein it can be seen to peak above the horizon in the month of May. [1]

In 300BC, Egyptian thinkers, centered around the Island of Elephantine, via clay creation myth, popularized the notion that humans came to life when the goddess Hathor put the ankh to the mouth of clay human figurines, molded by the god Khnum, thereby bringing them to life, which later became the central basis of the monotheistic retelling of this model as the story of Adam and Eve:

In 1885, Edward Balfour noted that the Chakra in the hands of Brahma, Vishnu, and Siva, such as shown below, is a modification of the crux: [1] 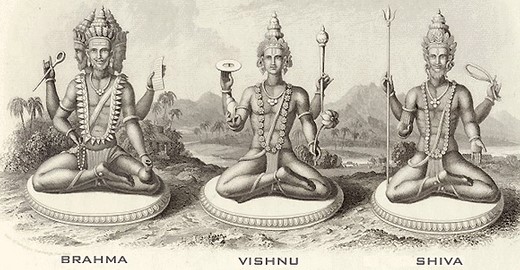 In 2007, Peter Joseph, in his Zeitgeist, via citation to Dorothy Murdock, Gerald Massey, among others, famously pointed out that the sun perceptually “dies” on the location of the crux for three days, Dec 22-24, before being “reborn” in its new yearly solar cycle.

Other
The Egyptians, of note, considered the Orion nebula, to be the final resting place of Osiris, after he was murdered by Set. [1]

“Crux, the cross. There are four stars in this constellation forming a cross, by which mariners, sailing in the southern hemisphere, readily find the situation of the antartic pole, by means of the stars α and γ which, nearly point in this direction. This is a new constellation, and formed, no doubt, in honour of that instrument on which the Son of God redeemed mankind.”

“The symbol of the circle and the cross, under every variety of circumstance, in Egypt, Africa, Britain, China, Scandinavia, and America, in every age, by every people, from the dawn of secular history to the present hour, has been held by all in the same superstitious veneration, has been honored with the same distinguishing rites, and has always expressed the same doctrine or mystery. Divine potentiality was sometimes indicated by two or more sceptres arranged at right angles or quadrinally, with the nave of a wheel, or a simple circle, or Bix or eight round stars, at the point of intersection, with other orbs or ornaments. Osiris by the cross gave eternal life to the spirits of the just. The Crux ansata is the earliest known form of the cross. It is commonly called the key of the Nile, because often seen on Coptic and Egyptian monuments. It was very similar to the Roman letter T, with a roundlet or oval placed immediately above it, and signified hidden wisdom or the life to come. It was used by the Chaldeans, Phoenicians, Mexicans, and Peruvians; doubtless it was intended to denote the solar and terrestrial spheres. And, subsequently, sovereigns each adopted the circle, associated with it the cross, and this symbol of royalty is in use with every king of Europe. The Chakra in the hands of Brahma, Vishnu, and Siva, is a modification of it.”

— Edward Balfour (1885), The Cyclopedia of India and of Eastern and Southern Asia [2]

References
1. Dewdney, Christopher. (2008). Acquainted with the Night: Excursions Through the World After Dark (pg. 218). Bloomsbury.
2. Balfour, Edward. (1885). The Cyclopedia of India and of Eastern and Southern Asia: Commercial, Industrial and Scientific, Products of the Mineral, Vegetable, and Animal Kingdoms, Useful Arts and Manufactures, Volume 1 (pg. 841). B. Quaritch.