In chemistry, a double elective affinity, aka "double displacement reaction", in modern parlance, is a reaction or affinity reaction, involving four affinities, in which two compositions, each consisting of two ingredients, mutually decompose each other, being destroyed, and, by a double interchange of these principles, form two new compounds. [1]

The following shows the human elective affinity conceptualized "double elective affinity" reaction that German polyintellect Johann Goethe conceptualized as the basis behind the chemical reaction story of his 1809 physical chemistry based novella Elective Affinities, as described in his famous chapter four, according to which Charlotte (A) and Edward (B), a married couple residing on their country estate (retort), decide to invite their associates Captain (C) and Ottilie (D) to the estate, per various disclosed reasons of circumstance, through which, chapter by chapter, the following double elective affinity (double displacement) human chemical reaction accrues: 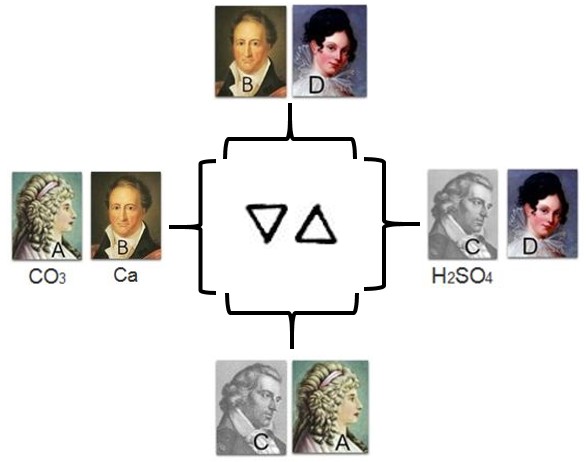 the inverted ∇ and upside Δ triangles indicating the reaction occurred in the dry way (heated) and in the wet way (in water), respectively, i.e. heated by the sun and near or in the various ponds and lakes on the estate; the upward pointing bonding bracket, signifying that Edward and Ottilie, in their BD union, evaporated out of the system of the estate, first Edward going off to war, and eventually the pair of them dying (dereacting) at the end of the novella; the downward pointing bracket signifying that the Captain and Charlotte, in their CA union, precipitating in the state as a semi-formed solidified couple, approximately.

The general model of which, Goethe attributes to Bergman's reaction diagrams, e.g. reaction #21 is shown above, which Goethe considered the "moral symbols" of nature; the reaction described in chapter four, specifically being the contact of limestone with sulfuric acid, shown below, which Goethe takes as the central reaction model for his novella:

which, in modern chemical equation notation, translates as follows: