In 1958, an American scientist (Ѻ) was using the term econophysics as follows:

“The author advances the theory termed ‘econophysics’ in which the economy of a nation is based on the ‘quantum unit’ dollars.”

In 1991, in Turkey, the first PhD dissertation in the field of econophysics was completed by Necip Cakır at the University of Bogazici, Istanbul, as published in the 1998 book Physics and Economics. [4] Cakir currently is a professor of economics and deputy dean at the University of Bahcesehir. [5]

In 1995, American physicist Eugene Stanley, at the second Statphys-Kolkata conference in Kolkata (formerly Calcutta), India, was using term "econophysics" to describe the large number of papers written by physicists in the problems of stock markets. [1] In the paper presented at the meeting, Stanley argued that: [12]

In 2011, Taiwanese economists Shu-Heng Chen and Sai Ping Li, in their “Econophysics: Bridges over a Turbulent Current”, argued that economics and physics were two shores of a turbulent river: [19]

“Despite their very different ages, physics and economics have been developed and extended along the two sides of the same river for a long time. Crossing the river signifies the eﬀorts made to connect the side of physics with the side of economics, or more generally, the side of the natural sciences and the side of the social sciences.”

More than one century ago, crossing the river had already started, but over the years, particularly in recent years, the scale and organization of the crossings have changed, from individuals to communities and from traveling to immigrating. To facilitate such a massive crossing, bridges have also been built over the river. The academic community currently known as econophysics can be regarded as an emerging society after these crossings and the ensuring immigration. All organized conferences and journals (publications) related to this community are bridges.”

They then attempting to differentiate, per citation to Bertrand Roehner (2002), between “classical econophysics”, i.e. pre Eugene Stanley (1995) term usage, and “modern econophysics”, 1996 to present; the division of which seems to be evidenced by the following 2013 econophysics histogram: (Ѻ) 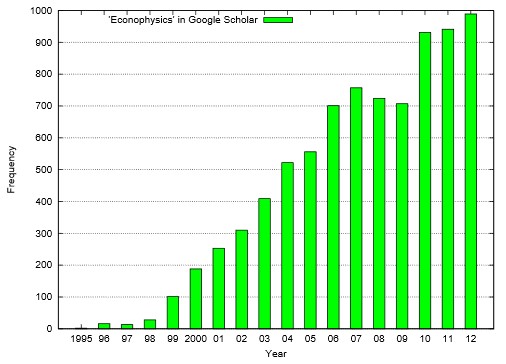 One of the modern problems, to note, is that approximately 95 percent of these thousands per year "econophysics" scholarly term usages, is that these are not physics of economics proper, e.g. of the type Paul Samuelson was taught, applications, but rather Sokalism-style mathematical toolism running on a thin veneer of physics paint, i.e. there is no F = ma involved in the majority of these newer formulations.

“In 1995, Eugene Stanley coined the phrase ‘econophysics’ at a meeting in India. At about the same time, Yi-Cheng Zhang and his group introduced the econophysics webpage: unifr.ch/econophysics. Simon Capelin at Cambridge University Press led the charge by publishing Stanley’s and other econophysics books. His program there is still strong. Sadly, econophysics, like nonlinear dynamics, was never recognized by the APS as part of physics. American physics prefers (nonfalsifiable) string theory to falsifiable approaches to social problems. My university offers one of the only econophysics PhD programs in the world.”

“Through its physics publishing director, Simon Capelin, Cambridge University Press played a pioneering role in the development of econophysics.”

Physics-less econophysics?
There is a blurry unspoken divide in papers and books categorized under the umbrella term "econophysics" between those authors who base their economic formulations and theories on physical principles, e.g. Emanuele Sella (1910), and those who base their economic formulations and theories NOT on physical principles, but simply use equations of physics, in a mathematical isomorphism sense, aka toolism, to solve problems or speculate on things, e.g. Eugene Stanley. The same problem, to note, resides in sociophysics, between those who use NO actual physics in their formulations, e.g. Serge Galam, and those who do, e.g. Jurgen Mimkes.

Nearly all post 1996 econophysics papers are in alignment with the comment that American physicist Eugene Stanley coined the term "econophysics" at the 1995 second Statphys-Kolkata conference. Beyond this, however, perspective seems to diverge into two schools of thought, the first group of which, representative of the what might be called the "Stanley school" applies statistical physics methods, tools, and equations to peripheral aspects and markers, such as finance and market indices, but NOT to humans themselves. This point of view is summarized by Victor Yakovenko and Barkley Rosser in 2009 as follows: [13]

“Econophysics does NOT literally apply laws of physics, such as Newton’s laws or quantum mechanics, to humans. It uses mathematical methods developed in statistic physics to study statistical properties of complex economic systems consisting of a large number of humans.”

This might well be called the "conform to analogs" view, wherein one may study a peripheral aspect of humans such as "money" or a stock price using, for instance, the conservation of energy or statistical mechanics, but speculations laws of physics applied to humans themselves are skirted around.

In 2011, American physicist Joseph McCauley, noted for his 1999-present work in attempting to falsify invisible hand based stable equilibrium theory, head of UC Houston "econophysics department", one of the big three American schools of econophysics, gave his opinion that none of the following are econophysicists:

At this point there seems to be some terminology confusion? If someone who writes an article entitled “One of the Physical Foundations of Economics”, such as American economist Julius Davidson, is not writing in the field of “econophysics”, as McCauley sees things, than what field of science is he or she writing in? Possibly, we might well label Davidson as a “physical economist” working in the field of “physical economics”, but whatever the case this seems to be a semantic issue in need of reconciliation. If McCauley defines econophysics as the physics of finance, then he should rename his department as “financial physics” in the same manner as the field of financial thermodynamics is defined as the thermodynamics of finance.

The alternative school of thought view, one which generally tends to cull from theorists that predate the 1995 Stanley usage of the term econophysics, is that wherein physics concepts and laws are applied to the study of the economic world AND to humans under the assumption that humans behave like particles, electrons, atoms, or molecules. Romanian socioeconomic physicists Gheorghe Savoiu and Ion Siman summarize their perspective of the econophysics as follows: [4]

“Econophysics was from the beginning the application of the principles of physics to the study of financial markets, under the hypothesis that economic world behaves like a collection of electrons or a group of water molecules that interact with each other, and the econophysicists are always considered that, with new tools of statistical physics, and the recent breakthroughs in understanding chaotic systems, they are making a controversial start at tearing up some perplexing economics and reducing them to a few elegant general principles with the help of some serious mathematics borrowed from the study of disordered materials.”

Econo-thermodynamics
The subject of econophysics, as defined by Stanley, in a 2000 article co-written with Italian econophysicist Rosario Mantegna, to note, seems to make little use of thermodynamics. [2]

Others, such as Jurgen Minkes, incorporate a good deal of thermodynamics in their version of "econophysics". [3]

In 2006, German solid-state physicist Jurgen Mimkes presented at on of the first focus sessions hosted by the American Physical Society: [9]

“Physicists often model economic interactions like collisions of atoms in gases: by interaction one agent gains, the other loses. This leads to a Boltzmann distribution of capital, which has been observed in wealth distributions of different countries. However, economists object: no economic agent will attend a market in which he gets robbed! This conflict may be resolved by writing basic laws of economics into terms of calculus. In these terms the daily struggle for survival of all economic systems turns out to be a Carnot cycle that is driven by energy: heat pumps and economic production depend on oil, GNP and oil consumption run parallel for all countries. Motors and markets are based on the same laws of calculus (macro-economics) and statistics (micro-economics). Economic interactions mean exploiting a third party (nature) and are indeed close to robbing! A baker sells bread to his customers, but the flour comes from nature. Banks sells loans to investors, but the money comes from savers. Econo-thermodynamics is a thrilling new interdisciplinary field.”

In 2009, philosopher Michael Mannino, in his article “Econophysics: A New Paradigm”, traces the subject of econophysics back to Adam Smith’s view that Newtonian mechanics and classical physics are the model for all social and economic phenomena. [6]

In the 2000s, fledgling econophysics schools and or groups began to emerge at the UC Davis (person, date), University of Maryland (Victor Yakovenko, c.2000), where the Maxwell-Boltzmann distribution is used, and University of Houston (Joseph McCauley, c. 2005).

A 2013 econophysics course (physics 250) at UC Davis entitled "Econophysics: the Statistical Physics of Financial Markets" taught by geophysicist John Rundle, based primarily on Rosario Mantegna and Eugene Stanley's 2001 An Introduction to Econophysics; along with some earlier work by German physicist Dietrich Stauffer [10]

Synonyms
In the Minkes' version of econophysics, synonyms would include: thermoeconomics and economic thermodynamics. Of these terms, only "economic thermodynamics" clearly embodies the specific meaning: the study of economic systems or economic processes using thermodynamics; whereas thermoeconomics can sometimes be found used in the sense of: the economics of specific industrial or factory processes, e.g. the monetary factors involved in methane production (i.e. a subject having nothing to do with people); and per above, econophysics, can often not employ thermodynamics logic at all. Another term is Philip Parker's 2000 term "physioeconomics", a mixture of physiology, neuroanatomy, physics, thermodynamics (a bit), and economics.

“I seek general analogies between economics and physics.”

“I believe that economic laws can be formulated similar to the laws in thermodynamics.”

“I believe that microscopic market simulations have an important role to play in economics and ﬁnance. If it takes people from outside economics and ﬁnance – perhaps physicists – to demonstrate this role it won’t be for the ﬁrst time that outsiders have made substantial contribution to these ﬁelds.”

“Econophysics is still unrecognized as science by the American Physical Society.”

“My background is physics and solid-state thermodynamics. My present field is ‘physical economics’, especially macro and microeconomics, and finance. My time invested in this interdisciplinary work is 100%. I have trouble calling my field ‘econophysics’, as this only covers finance.”