In forces, the electromagnetic force is a force that consists of an electric field oriented perpendicular to a magnetic field, that can be emitted or absorbed from certain types of fermions, such as a moving electron or a proton, which is described as being comprised of spin 1 field particles called photons, that are “on mass-shell” when in the form of light or “off mass-shell” when in the form of static fields, such as in the form of the electric field around the proton in a hydrogen atom. [1]

Overview
In 1861, James Maxwell formulated the equations that defined the nature of the electromagnetic force, the original form of which contained 20 variables.

In 1873, Maxwell gave the following diagram of the spatial relationship between electromagnetic fields ‘at a given instant’ along a ray of ‘plane-polarized light’. [6] 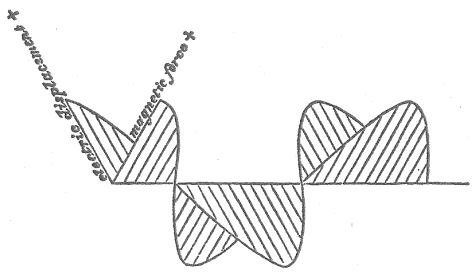 Later, Maxwell's 20 equations were reduced by Oliver Heaviside into a more reduced set of four equations and seven variables; the first two of which, building on the work of Carl Gauss, are shown below: [3]

The third equation, building on the work of Michael Faraday, is as follows:

The four so-called Maxwell equation, building on the work of Andre Ampere, is as follows:

Social force | Interactions
Historically, very little work has been done in attempts to say what the electromagnetic force has to say about the so-called "forces" that work in the operation of social interactions, such as have been labeled variously as "social forces" (Auguste Comte, 1854), economic forces, the forces of love and hate (Empedocles, 450BC), etc.

In circa 1950, German philosopher Ernst Junger (1895-1998), according to Helmut Lethen (1994), promulgated some type of “electromagnetic force fields” social theory, based on an electric circuit model of social analysis, admixture with iron filing movement theory; the following being an example Junger quote: [5]

“The arrangement of atoms thus takes on the sort of nonambiguity that prevails in the electromagnetic force field.”

People or users in an administrative state, according to Junger, get connected and integrated via current into an “energy association”, according to which the individual automatically becomes an “organic construction”.

In 1993, Canadian political scientist Paris Arnopoulos, in his Sociophysics, was grappling with this issue as follows: [4]

“All entities, whether fermions or humans, need some mediating agency to interconnect them into systems. This indispensable interrelating and interacting role is ultimately played by different field particles named bosons. Unlike fermions, which are characterized by a significant mass and charge, bosons do not take partake of these to attributes. Rather, they only have spins and provide connections as they are exchanged among fermions. Such exchanges are of three kinds: weak or strong nuclear, electromagnetic, and gravitational. The first exist by sharing gluons and thus hold together the atomic nucleus. The second take place by exchanging photons and thus explain most of our ordinary phenomena. The third operate by the displacement of gravitons and thus provide the overall attraction between everything in the universe. Similar phenomena occur up the ontological ladder to describe social, as well as atomic and galactic bonding. Societies, like all systems, are held together by certain ties of varying strength and extent.”

In 2007, American electrochemical engineer Libb Thims, independent of Arnopoulos, in his Human Chemistry, was outlining a similar formulation of the same, in regards to the exchange force nature of human bonding and human dynamics. [2]