In chemistry, element is an atom or pure chemical substance characterized by an atomic number Z, the number of protons its nucleus, numbering from 1 to 118, of which 92 are naturally occurring elements, at earth-bound conditions. [1]

Earth
Vernadsky was one of the first to note that the elements of the periodic table do not distribute themselves uniformly, stating for instance that elements with even atomic numbers predominate in the earth’s crust. [4]

Human mass composition tables
Mass composition tables for biological entities are difficult to come by. In 1899, English physiologist John Thornton stated that there were 72 elements known in chemistry and that 14 of these enter into the composition of the human body: oxygen, carbon, hydrogen, nitrogen, sulphur, phosphorus, chlorine, sodium, potassium, calcium, magnesium, iron, fluorine, and silicon; and noted that other elements, such as manganese and lead (anti-element: poison), have sometimes been found in small quantities. [7]

One of the best books to given element counts in humans is English chemist John Emsley's 2001 Nature's Building Blocks: an A-Z Guide to the Elements, a book which functioned as one of the principle sources in the calculation of the formula for one human molecule by American chemical engineer Libb Thims, between 2002 and 2007. [6]

The following is a 2009 depiction of the "essential" elements in the human body, according to the University of Waikato: [3] 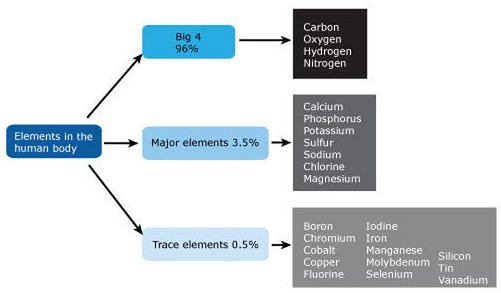 Human molecule
The following table lists the 26 functional elements that comprise one human molecule, according to the 2002 calculation of American chemical engineer Libb Thims. The less-accurate 22-element and 12-element empirical human molecular formulas for one human molecule by American limnologists James Elser and Robert Sterner (2000) and New Scientist (2005), respectively, are shown below for comparison. [2]

The four functional elements missing from Sterner and Elser's formula, i.e. Tin (Sn), Selenium (Se), Nickel (Ni), and Vanadium (V), as determined by Thims, are shown in bold below, listed adjacent to their known function:

“By the term ‘elements’, we mean to express those simple and indivisible atoms of which matter is composed, it is extremely probable we know nothing at all. about them; but, if we apply the term elements or principles of bodies, to express our idea of the last point which analysis is capable of reaching, we must admit, as elements, all the substances into which we are able to reduce bodies by decomposition.”

Further reading
● Roussel, A.M., Favier, A.E., Anderson. (2000). Trace Elements in Man and Animals 10. Springer.
● Kean, Sam. (2010). The Disappearing Spoon: and Other True Stories of Madness, Love, and the History of the World from the Periodic Table of Elements. Hachette Digital.