In Elective Affinities, estate is the retort (or social retort), reaction vessel, closed or semi-closed, depending, reactive system, beaker, test tube, among other namesakes: 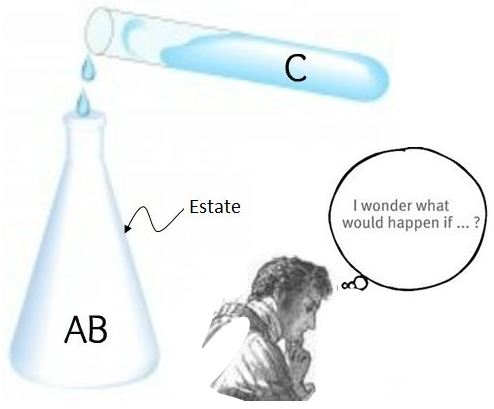 “That strange Mittler is right after all,” replied Charlotte; “all such undertakings are ventures; what will come of them it is impossible to foresee. New elements introduced among us may be fruitful in fortune or in misfortune, without our having to take credit to ourselves for one or the other. I do not feel myself firm enough to oppose you further. Let us make the experiment; only one thing I will entreat of you—that it be only for a short time. You must allow me to exert myself more than ever, to use all my influence among all my connections, to find him some position which will satisfy him in his own way.”

“Spatial enclosure and narrative compactness are part of the Novelle’s economy. In Die Wahlverwandtschaften, this is also implicit in the novel’s central metaphor of the chemical reaction. Just as chemical experiments are conducted under controlled laboratory conditions, so Goethe provided specific narrative conditions—the isolation of his four main characters—in order to observe the operation of natural laws.”

Eliot, in some way, is said to present her modified version of this in her “Laws of Attraction” book section, among other places. A noted section about the surveying of the estate that occurs is as follows:

“… the property and its surroundings; at the same time he expressed his long-cherished desire to become more familiar with his estate ..." The first thing we should do," said the Captain, "is to survey the whole property with a compass …”

The estate is replete with a mansion [RH] or castle [HB], depending on translation, summer house [HB] or moss hut [RH], some type of rock formation [HB] or cliff face [RH], lake, orchard, graveyard, paths, among other natural amenities, such as ponds a mill, all within the confines of the estate.

Architectural surveying | Analysis
Wolfgang Staroste, in his 1961 “Raumgestaltung und Raumsymbolik in Goethes Wahlverwandtschaften”, according to Gerlinde Röder-Bolton, supposedly, is said to give an extended analysis of the spatial organization of the estate. [3]

In 2007, American electrochemical engineer Libb Thims, argued that the land and water descriptions are representative of Swedish chemist Torbern Bergman's 1775 division of his reactions into the "wet way" (aqueous) and "dry way" (heated), such as can be depicted in scale model of the lakes (wet) and land (dry) regions of the estate, adjacent. [1]

The "reaction" of Ottilie with the child Otto occurring in the "wet way" of rowing across the lake in a distraught state of mind results in the drowning death (reaction end) of the child (P2:C13).

The following are a few noted depictions of the new geological undertakings the characters make in changing the land of the estate, the focus of which are said be based on a certain philosophical point of view Goethe was outlining in regards to the relationship between land, housing, travel ways, and his human chemical theory:

Mansion | Castle
The following, below left, is a recent artistic rendition of the mansion of the estate, which may have taken its cues the Charlotte von Stein mansion in Thuringia, sections of which are shown below right and bottom. [5]


The following circa 1782 silhouette, to exemplify, is Goethe in front of his house (given to him by the Duke) in Weimar. In the background, to the left, is the house of the Duke and Duchess, next to it is the house of Charlotte von Stein, and the structure to the right is the house of Goethe. [6] 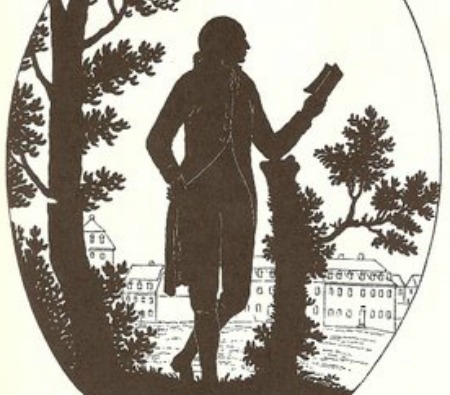 This would date the silhouette to later than 1782, the year he moved in. Goethe's house is still standing today, with his own original carriage in the garage. It is now a museum. A lovely garden graces the back of the house.

Renditions
The following are various artistic renditions of the estate:


Summer house | Moss hut
The opening P1:C1 discussion of Eduard in his nursery-garden or orchard and the mention of the summer house, seems to imply that the story, in some way, is in recollection, of Goethe's garden house (as shown), at which a large part of Goethe's existence took place, which was was the first home acquired by Goethe in Weimar in 1776, a few months after his arrival in Weimar, together with the surrounding garden. The purchase was financed by Duke Carl August of Saxe-Weimar-Eisenach. The garden house was Goethe’s main residence and workplace until he moved to Frauenplan in June 1782. [4]

After buying the house, Goethe began to repair it and redesign the garden immediately (similar to as occurs in Elective Affinities). He divided it into three parts which are still recognizable today: the park-like slope behind the house, the sunny orchard and the lower part of the garden where the vegetable beds can be found. [4] The architectural landscape reconstruction and surveying that occurs in the novella seems to revolved around recollection of his garden house years.