In religio-mythology, Eve (TR:18), from the Hebrew “breath” or “spirit”, is the fictional female character (Egyptian prescript: Hathor), in the story of Adam and Eve, namely wife of Adam (Egyptian prescript: Atum), as told in the Bible (section: Genesis) the purported first woman of humankind, who was said to have been created by god out of one of Adam’s ribs.

Myth | Origin
The origin of the puzzling story of god making a woman from the rib of a man, as summarized well by Gary Greenberg (2000), is an admixture of the Heliopolis creation myth story of the god Shu, son of Atum, pulling Nut (heaven) from Geb’s (earth) body, thereby separating heaven and earth, PLUS the Egyptian mythology story of how the god Khnum made the first two humans out of clay on his potter’s wheel (supposedly by separating one original ball of magical clay), PLUS the Sumerian mythology story of the goddess Ninti, meaning “lady of the rib”, who had the power to make humans out of a mixture of blood and clay, healing Enki’s rib; the gist of this is summarized below: [1] 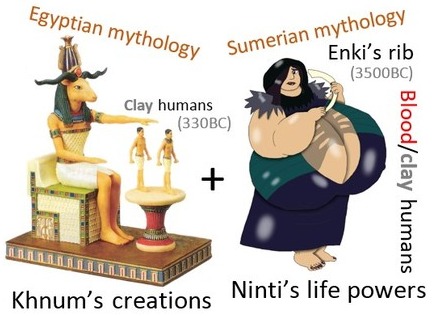 In the Hebrew redaction (1200-500BC), of Egyptian religion, according to recension theory, the Sumerian myth and the two Egyptian myths were synretized into a new more palatable monotheized story, aka the story of Adam and Eve.

Other
In c.1770, Albrecht Haller, on the “scatulation theory”, which assumed that the outline of the entire organism, with all its parts, was present in the egg, according to which the ovary of the embryo had to supposed to contain the ova of the following generation (and, these, again, the ova of the next generation; and so on), calculated that god, 6,000-years ago, on the sixth day of creation, packed the germs of 200-billion men into the ovary of Eve (see: Adam and Eve). [2]

“The story of Eve and the serpent, and of Noah and his ark, drops to a level with the Arabian Tales, without the merit of being entertaining, and the account of men living to eight and nine hundred years becomes as fabulous as the immortality of the giants of the mythology.”

“How could god create Eve from Adam’s rib?”

— Ricky (2015), one of three written down questions, brought by an aged 11 boy to Libb Thims' Zerotheism for Kids: Smart Atheism for Children “Monday School” class, Aug 10

“Why was there a first man, instead of a woman?”

— Temple (2015), one of six written down questions, brought by an aged 10 girl to Libb Thims' Zerotheism for Kids: Smart Atheism for Children “Monday School” class, Aug 10

“The drafting book Smart Atheism: for Kids is a follow up to an actual ‘smart atheism’ stylized ‘Sunday School’ for kids class I taught in Aug 2015 to five kids, who came with Noah’s ark and Adam’s rib questions and left (Ѻ) with Big Bang and molecular evolution answers.”