In experiments, floating magnets experiment is an experiment, done originally by English chemist-physicist William Gilbert in circa 1590, using loadstones floated on little wooden boats, and then by American physicist Alfred Mayer in 1878, using magnetized needles floating inserted into cork, wherein, in the latter version, geometric pattern distributions of floating positively charged needles (little magnets) were put in the vicinity of the positive end of a powerful magnet, then documented and studied, in efforts to discern a possible theoretical basis for atomic or molecular structure. [1]

Gilbert | Loadstones
In circa 1590, English chemist-physicist William Gilbert conducted a “floating loadstones experiment”, in which spherical lodestones were floated on water in small wooden boats, something akin to the following toy version of the experiment: [7] 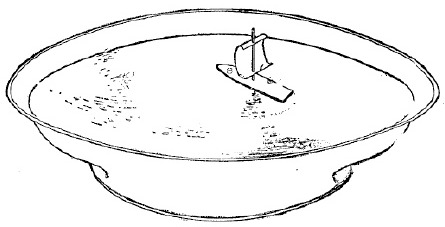 according to which he found that magnetic forces often produce circular motion (see also: turning tendencies). [1]

American physicist Alfred Mayer at some point came to learn of Gilbert's work and experiments. It is known, for example, that Mayer is cited by P. Fleury Mottelay as being one of the people who aiding in the 1892 English translation of Gilbert's De Magente. Whether Mayer, in 1878, was inspired to do his "floating magnetized needles on cork" experiment based on Gilbert's floating loadstones experiment is an open question, but the inference seems plausible.

Mayer | Magnetized needles
In this experiment, Mayer took an assorted number of magnetized needles and stuck them through corks, floating in water, such that their north poles, i.e. positive ends, were all facing upwards at the same height above the water, all repelling each other equally. Mayer then held the south pole or negative end of a more powerful magnet some distance above the surface of the water to attract the needles simultaneously towards this center. The idea was to see what geometric equilibrium stability patterns formed for different numbers of needles under the influence of the similar attraction for the opposite pole as this attraction conflicted with the effects of mutual inter-magnet repulsion between the like (positive) poles.

Mayer found an interesting pattern: the like positive-poled needles liked to arrange themselves into concentric rings of stability. Three magnets formed a triangle, four a square, and a five a pentagon. When six magnets were used, however, one went to the center leaving the others to form a ringed pentagon. With eight magnets, two went to the center and six remained in an outer ring. As more magnets were added, up to eighteen, a separate inner system formed distinct from that of an outer ringed system. Beyond this, three systems formed an inner system, a middle ring, and an outer ring; and for a still larger number of magnets a four system ring pattern would emerge, and so on. Mayer's original diagrams for arrangements of 1-20 needles are shown below: [2]


To explain these curious equilibrium stability patterns, Mayer reasoned that the competing attracting and repulsing tendencies, between the like poles and oppositely charged central pole, respectively, resulted in the formation of geometric stability patterns, according to which the size of each pattern was determined by the relative strengths of the individual attractions and repulsions. The number of magnets, subsequently, determined the different stability patterns, in which each arrangement was the result of a local minimum energy configuration.

Thomson | Atomic structure
In 1897, English physicist Joseph Thomson (1856-1940) was aware of Mayer's experiment and in his “Cathode Rays” article began to cite him as follows: [3] 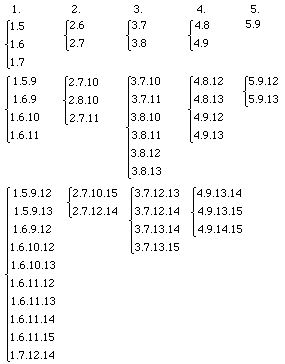 In 1904, Thomson would go on to use this structural ordering insight, in his more famous “On the Structure of the Atom” article, to develop what soon came to be dubbed the "plum pudding model" of atomic theory, the key sentence of which is shown below, next to conceptual images of this atomic model: [4]

Thims | Quantum electrodynamic evolution
In 2014, American electrochemical engineer Libb Thims redid the Gilbert-Mayer experiment using neodymium magnets on floating cork, according to which, to explain the turnover rate paradox, the electromagnetic field is what “holds” shapes of the positive and negative charges in regions of space, and that the geometric shape—like a person—will hold in form, if one charge is pushed into the pattern while another is removed:

As magnets are added, as Mayer famously diagrammed (up to 20 magnets), the 3D pyramidal structure will grow geometrically: a triangle base at 3 magnets, a square base at 4 magnets, a hexagon base at 5 magnets, a two ringed structure base at 10 magnets, a center magnetic surrounded by two ringed base at 15 magnets, and so on. In this sense, one could conceptually understand the "structure holding" paradox if one were to add a base magnet to a given geometry while simultaneous removing one, and do this for all the magnets of the structure, similar to the ship, river, or carriage variants of the paradox, and then ask if the resulting turned over or magnetic replaced 3D geometric structure is the same growing "thing" or a different growing thing?

This model, naturally enough, can be scaled up to the people viewed as powered atomic geometries or human molecules, whereby the positively charged (floating) magnets and positively (hovering) magnets become atoms (elements), with varying amounts of positive or negative charged electron valency, albeit the description becomes more complicated owing to the effect that quantum electrodynamic changes are involved owing to cyclical sunlight photon input (cause) and resulting electron orbital transitioning (effect), whereby molecular animation results, something that does not occur in the magnet, ship, carriage, or river water scenarios.

References
1. (a) Mayer, Alfred Marshall. "Experiments with Floating and Suspended Magnets, Illustrating the Action of Atomic Forces, the Molecular Structure of Matter, Allotropy, Isomerism, and the Kinetic Theory of Gases." Scientific American, supplement 5 [no. 129] (June 22, 1878): 2045-2047.
(b) Mayer, Alfred Marshall. "A Note on Experiments with Floating Magnets; Showing the Motions and Arrangements in a Plane of Freely Moving Bodies, Acted on by Forces of Attraction and Repulsion; and Serving in the Study of the Directions and Motions of the Lines of Magnetic Force." American Journal of Science, 3rd ser., 15 (1878): 276-277.
(c) Also: "Note on Floating Magnets [letter]." Ibid. 15 (1878): 477-478;
2. Mayer, Alfred M. (1878). "On the Morphological Laws of the Configurations Formed by Magnets Floating Vertically and Subjected to the Attraction of a Superposed Magnet; with Notes on Some of the Phenomena in Molecular Structure Which These Experiments May Serve to Explain and Illustrate." American Journal of Science, 16: 247-256.
3. Thomson, Joseph, J. (1897). “Cathode Rays.” Philosophical Magazine, 44, 293.
4. Thomson, Joseph, J. (1904). “On the Structure of the Atom: an Investigation of the Stability and Periods of Oscillation of a number of Corpuscles arranged at equal intervals around the Circumference of a circle; with application of the results to the Theory of Atomic Structure.” Philosophical Magazine, Series 6, Vol. 7, No. 39. March, pgs. 237-65.
5. Plum pudding model – Wikipedia.
6. Pumfrey, Stephen and Tilley, David. (2003). “William Gilbert: Forgotten Genius”, Physics World, Nov.
7. Magnetic fun and facts – EliWhitney.org.