In aphorisms, God is dead refers to the 1882 proclamation made by German philosopher Friedrich Nietzsche, in his The Gay Science, epitomizing the emerging view, in his discerning mind, about the people of his day, not that God or a god once existed, and now is dead, but rather that the Christian God, i.e. the father of Jesus Christ, was no longer a viable source of any absolute moral principles.

The following is a 23 Dec 2010 pro-Christian “God is” billboard (Ѻ), on the New Jersey side of the Lincoln Tunnel , which replaced the American Atheists 26 Nov 2010 “Christmas is a myth” billboard (Ѻ), graffiti bombed with the word “Dead” (Ѻ), in reference to Nietzsche’s famous proclamation. 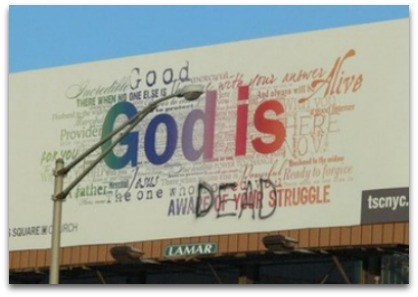 Nietzsche's "god is dead" proclamation is second-most famous statement, in the timeline of atheism, behind French physicist Pierre Laplace’s more famous 1802 “I had no need of that [god] hypothesis” declaration to Napoleon (see: Napoleon Laplace anecdote); and Galileo's c.1633 "still, it moves" quip.

The Madman
The full text of the proclamation, from his section 125: “The Madman”, is as follows: [1]

“Have you not heard of that madman who lit a lantern in the bright morning hours, ran to the market place, and cried incessantly: “I seek God! I seek God!”—As many of those who did not believe in God were standing around just then, he provoked much laughter. Has he got lost? asked one. Did he lose his way like a child? asked another. Or is he hiding? Is he afraid of us? Has he gone on a voyage? emigrated?—Thus they yelled and laughed

The madman jumped into their midst and pierced them with his eyes. “Whither is God?” he cried; “I will tell you. We have killed him—you and I. All of us are his murderers. But how did we do this? How could we drink up the sea? Who gave us the sponge to wipe away the entire horizon? What were we doing when we unchained this earth from its sun? Whither is it moving now? Whither are we moving? Away from all suns? Are we not plunging continually? Backward, sideward, forward, in all directions? Is there still any up or down? Are we not straying, as through an infinite nothing? Do we not feel the breath of empty space? Has it not become colder? Is not night continually closing in on us? Do we not need to light lanterns in the morning? Do we hear nothing as yet of the noise of the gravediggers who are burying God? Do we smell nothing as yet of the divine decomposition? Gods, too, decompose. God is dead. God remains dead. And we have killed him.

“How shall we comfort ourselves, the murderers of all murderers? What was holiest and mightiest of all that the world has yet owned has bled to death under our knives: who will wipe this blood off us? What water is there for us to clean ourselves? What festivals of atonement, what sacred games shall we have to invent? Is not the greatness of this deed too great for us? Must we ourselves not become gods [see: uberman] simply to appear worthy of it? There has never been a greater deed; and whoever is born after us—for the sake of this deed he will belong to a higher history than all history hitherto.”

Here the madman fell silent and looked again at his listeners; and they, too, were silent and stared at him in astonishment. At last he threw his lantern on the ground, and it broke into pieces and went out. “I have come too early,” he said then; “my time is not yet. This tremendous event is still on its way [see: another Newton], still wandering; it has not yet reached the ears of men. Lightning and thunder require time; the light of the stars requires time; deeds, though done, still require time to be seen and heard. This deed is still more distant from them than most distant stars—and yet they have done it themselves.

It has been related further that on the same day the madman forced his way into several churches and there struck up his requiem aeternam deo [eternal rest to god]. Led out and called to account, he is said always to have replied nothing but: “What after all are these churches now if they are not the tombs and sepulchers of God?”

The above “God vs Gibbs” (or “Gibbs vs God”, depending) depiction — a Michelangelo-inspired rendition of the hand of God (or Gods energy) reaching down and giving “life” to DNA, or some type of enzyme or protein molecule, shown opposed to the hand of Willard Gibbs (or Gibbs energy) reaching up and taking away the concept of life (or theory of life) from the domains of morality, meaning, and sense of purpose (see: defunct theory of life and life terminology upgrades), a labeled-rendition of the artwork found in the 2013 Triple≡Bond Chemistry (triplenlace.com) article “Chemical Formula of a Human” (Spanish → English), on the religious-overthrowing implications of human molecular formulas, citing the Sterner-Elser molecular formula (2000) and Thims human molecular formula (2002) — embodies the inherent nature of the 2006-present “Gibbs energy usurping Gods energy” stylized Rossini debate, “sparked”, no thermal word analogy intended, into journal article debate via American chemist Harold Leonard’s Journal of Chemical Education suggestion that American physical chemist Frederick Rossini's 1971 “Chemical Thermodynamics in the Real” reasoning, i.e. human chemical thermodynamics (or physicochemical humanities) formulations, might help us “find a formula for fighting terrorism, while preserving civil liberties”, is indicative of the realization that, despite Friedrich Nietzsche’s famous 1882 aphorism, God certainly is not yet completely dead, certainly not amid the general populous, percentages varying per country (see: existence of god), nor among the minds of elite scientists (see: belief in the existence of god by scientists), and that the battleground for the “war on god” is something occurring between physical scientists and or physicochemical scientists, found amid the equations of chemical thermodynamics applied to the humanities, and the formulas derived therefrom, applied to the deeper questions of freedom, security, liberty, and the pursuit of happiness.

Quotes
The following are other related quotes:

“God is dead: but considering the state of the species man is in, there will perhaps be caves, for ages yet, in which is shadow will be shown.”