In religio-mythology, god reduction refers to the “techniques”, e.g. syncretism, i.e. two or more gods merged into one, such as the gods Ra and Atum becoming the god Atum-Ra (or Amen-Ra, in his merger with Amen), “methods”, de-deification, e.g. making gods into prophets, such as the turning of the god Nun into the person Noah, and “processes”, e.g. “god atrophy, wherein certain gods become obsolete, to the point where they are no longer worshiped or have active function, wherein the number of gods in a given theology becomes reduced or lowered in number.

Overview
In 3100BC (1st dynasty), Horus was the supreme god, and there were at least 42 local nome gods, along with many other parallel gods, e.g. Set.

In the 4th to 6th dynasty Egyptian theology, there were 200+ active gods, and many chief gods, and one or more supreme gods, depending on period or dynasty; with some counts going as high as 1,200+ assorted gods (e.g. 19th dynasty).
-
In c.2300BC, the general state of the Egyptian pantheon (Ѻ) of gods looked something akin to the following, showing the main supreme gods: Ra, Ptah, Atum; Khnum, the creator of humans; the two main god families: Ogdoad (of Hermopolis) and Ennead (of Heliopolis), along with Horus, the "oldest of all the gods", who at this period had become rescripted as being the offspring of the Ennead:

In 2181 to 2061BC, or 7th to 11th dynasty (first intermediate period), during the so-called “Hermopolis recension”, Hermopolis became the state capital of Egypt, according to which the Ogdoad became the supreme god or god power, so to say, of Egypt, and a synretism occurred in which the Ogdoad was said to have created Ra or Ra-Atum (Atum-Ra), who, in turn, was then said to have created the Ennead, therein bringing about a unification of 18 different gods into one general creation scheme:

In c.2000-1800BC (12th dynasty), Amen, the previous local god of Hermopolis, as seen in the Ogdoad, was reconceptualized as being a synretism of four previous supreme gods: Nun, Ra, Ptah, and Atum, each being Amen "reincarnate", as he was conceived, thereafter being visualized into one new supreme god, as shown below right, having all the body parts of the previous four supreme gods, rolled into one:

In 1352-1336 BC (18th dynasty), the radical Egyptian pharaoh Akhenaten attempted to reduce all the gods and supreme gods to one god, named Aten, conceptualized as the power of the sun, or something to this effect, in which all other sub-gods were jettisoned, this becoming the world's first attempt at monotheism, i.e. a true one god monotheism religion:

This reduction, however, lasted only a few decades, after which the state religion reverted back to the gods of the Ennead, in various combinations of stories, in respect to who was the supreme god or god pairs, e.g. Set vs Horus, Osiris vs Set, Osiris-Ra, etc (see: supreme god timeline).

In c.500BC, a sect of Egyptian priest teachers, called the Cohens (Herodotus, 450BC), took aspects of Aten-based religion, which the combined with the older Egyptian religions, in such a way that they turned the various supreme gods and key gods and goddess into Patriarchs, angels, and demons.

The following is one take, being partially accurate (e.g. Atum [not Edom] became Adam), on this complex reduction:
-

“In this way antiquity disposes of its sun-gods. The Hebrews turned [the gods] into Patriarchs. Adam, Abraham, Israel, were names of Saturn. Edom is Adam; and the ancient usage was to name the nation, the land or city after the chief god. The Greeks made these deities founders of tribes.”

The adjacent diagram shows the thrust of the god-to-patriarch method of "god reduction", used by these Cohen Egyptians, aka Is-Ra-El-ites, specifically: Nun became the man Noah, Ra became the man Abraham, and Sopket became the woman Sarah.
-
The following, according to Moustafa Gadalla (1997) (Ѻ), shows an actual editing out of the term "ye gods" (Qumram cave scroll) (c.70AD) with "angels of gods" (Hebrews 1:16) in the so-called “Song of Moses”: 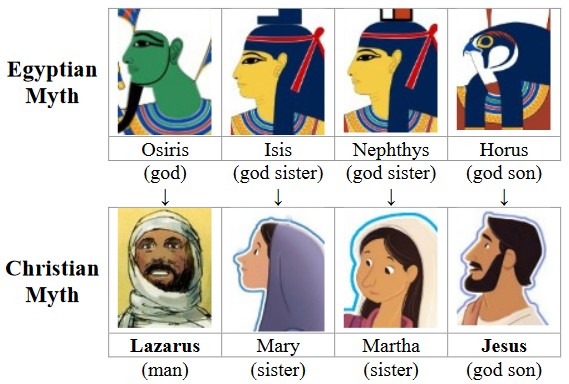 In c.250AD, Plotinus further reduced things by rescripting the three god things: “god the father” (Osiris + Amen-Ra), “god the son” (Horus), and the “holy spirit” (magical powers of Thoth; see: virgin birth), into the idea of the “trinity”. In c.300AD, Arius also had penned heterodox ideas about the trinity. In c.400AD, Augustine (c.400AD) learned the trinity idea from Plotinus, after which it became a stable concept of now monotheistic Christianity.

“The reduction in the number of the gods of Egypt began when man first realized that certain gods were mightier than others, for he ceased gradually to worship those who had, in his opinion, failed to justify his belief in them, and transferred his allegiance to the gods who were able to give him the most help. In process of time the god or goddess of a certain village or town would obtain a fame and reputation for power which would outrival those of the deities of the neighboring cities, and the growth of the worship of such god or goddess would be accompanied by a corresponding decline in that of the gods in the towns round about.”

“The houses of the gods, or temples, became larger and larger and more magnificent as increased wealth flowed into the country as the result of foreign conquest, but the gods remained the same, and the processions and ceremonies, though more magnificent under the New Empire, preserved the essentials of the early period. But if we examine the religious texts carefully it will be seen that the Egyptians were always trying to reduce the number of their gods, or, in other words, were always advancing from polytheism to monotheism.”

“The process of reducing the fairy-godmother's coach-and-six to the status of a one-horse cab may be seen in the Gospel according to Luke in getting rid of Osiris. The pair of sisters, Martha and Mary, appear in this Gospel, but without their brother Lazarus, and also without the resurrection. After all that has now been done towards identifying Bethany with the house in Annu [Heliopolis] and the nest of the two sisters, the two sisters with Isis and Nephthys, and the Christ with Horus, it cannot be considered far-fetched if we look upon Lazarus as a form of the Osiris that was dead and buried and raised to life again. As to the name, the Egyptian name of the Greek Osiris is Hesar, or Asar. And when we take into consideration that some of the matter came from its Egyptian source through the Aramaic and Arabic languages (witness the Arabic Gospel of the infancy) there is little difficulty, if any, in supposing that the Al (article the) has been adopted through the medium of the Arabic, or derived from the Hebrew prenominal stem אל [AL], to emphasize a thing, as in ‘the Osiris’ [the mummy], which passed into the article Al for "the" in Arabic, and was prefixed to the name of Osiris as Al-Asar, which, with the Greek "s" for suffix becomes L-azarus. The connecting link whereby Al-Asar was turned into Lazarus, the Osiris, was in all likelihood made in the Aramaic language, which had its root-relations with the Egyptian. Hieroglyphic papyri are among its monumental remains, as well as the inscription of Carpentras.”

“Pantheonic adjustment is a form of [god family] manipulation to promote political ends, which, in Egypt, occurred thrice: when Ptah, Amen and Aten were declared supreme gods at different periods. Around 3000BC, the deity Ptah was declared the ‘supreme one’. He was the presiding deity of the city of Memphis from where King Menes ruled. Ptah displaced the deity Ra of Heliopolis, till then the overlord (see: Heliopolis creation myth, 3100BC). The priests fabricated a suitable mythology to support the claim. A very important document, the Memphite theology (see: Memphis creation myth, 2800BC), was brought out to legitimize Ra as the creation of Ptah. The occasion for this change-over was the unification of southern and northern Egypt. The purpose was political though the socio-religious point was put forth, namely the need to have one god at the apex of the pantheon in a unified nation. → [see: Hermopolis creation myth, 2150BC] ← By about 1971BC, the powerful noble families of the city of Thebes (see: Thebian creation myth, 2000BC), declared their deity Amen as the supreme god. In this case the deity Ra was incorporated with Amen who by 1870BC, during the reign of Senusret III, became Amen-Ra. In 1372BC, Amenhotep introduced a form of sun worship through his chosen deity Aten. He changed his name to Akhenaten, dropping 'Amen’ from Amenhotep and placing Aten in the second part of the name (see: Amarnan creation myth, 1330BC). Aten too fell after a period. The next king Tutankhaten changed his name to Tutankhamen and revived lord Amen. On all these occasions theologians and priests fabricated suitable mythologies connecting other deities in a subordinate relationship to the supreme deity of the moment.”