The following under-construction interactive (hyperlinked) hmolscience periodic table shows the 26 functional elements in one human molecule (person), according to the Thims human molecular formula calculation, done by American electrochemical engineer Libb Thims (2002), which, includes all 20 of the so-called "Webb elements" of marine invertebrates, plus six found, according to in depth study of human physiology, to have active function in the human: [1]


which are included in the 2002 Thims human molecular formula, a more exacting calculation that has found acceptance recently in the thermodynamics community. [4]

History
It remains to be determined who exactly made a periodic table showing elements found in a human.

In 1899, English physiologist John Thornton stated that 14 elements enter into the composition of the human body: oxygen, carbon, hydrogen, nitrogen, sulphur, phosphorus, chlorine, sodium, potassium, calcium, magnesium, iron, fluorine, and silicon; and noted that other elements, such as manganese and lead (anti-element: poison), have sometimes been found in small quantities. [7]

In the mid 20th century, tables listing "elements" in living things and humans began to appear; the following are two early tables of elements in "living systems" and "man", respectively:

In 1989, English chemist John Emsley published his famous The Elements, in which devoted several pages to each element, out of which, in total, he gave the figure that “59-elements are in humans”. This figure, is an overestimate, by some 33 elements.

Nevertheless, many have used this Emsley estimate figure as a basis to give citations of human element and or formula count, e.g. Kathryn Harkup (2013) (Ѻ) or Joe Hanson (Ѻ) (2015) to name two examples (see: human molecular formula).

In the third episode, “… And the Bag’s in the River”, season one, the show opens to Professor White cleaning up the human that had been dissolved in hydrofluoric acid, amid which his mind reflects back to, it seems, college days, a dialogue with a woman, possibly his lover at the time, wherein she reads off the elements of a human to him and he writes them down on a chalkboard, commenting in the end how he thinks that something is missing, to which the woman replies “the soul”? 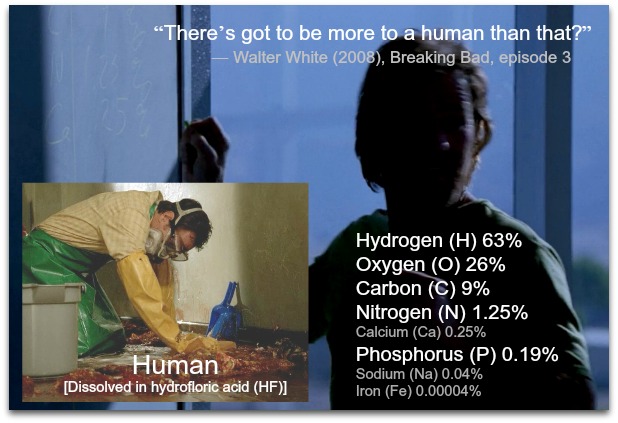 In 2013, Kirth Gerson, in his “Breaking Bad Pilot: People are Chemicals, Too!” class video lecture, analyzed Breaking Bad as a type of each human is an element (or chemical) reacting in a social system that makes chemicals, a sort of modern Elective Affinities analysis, so to say. [8] 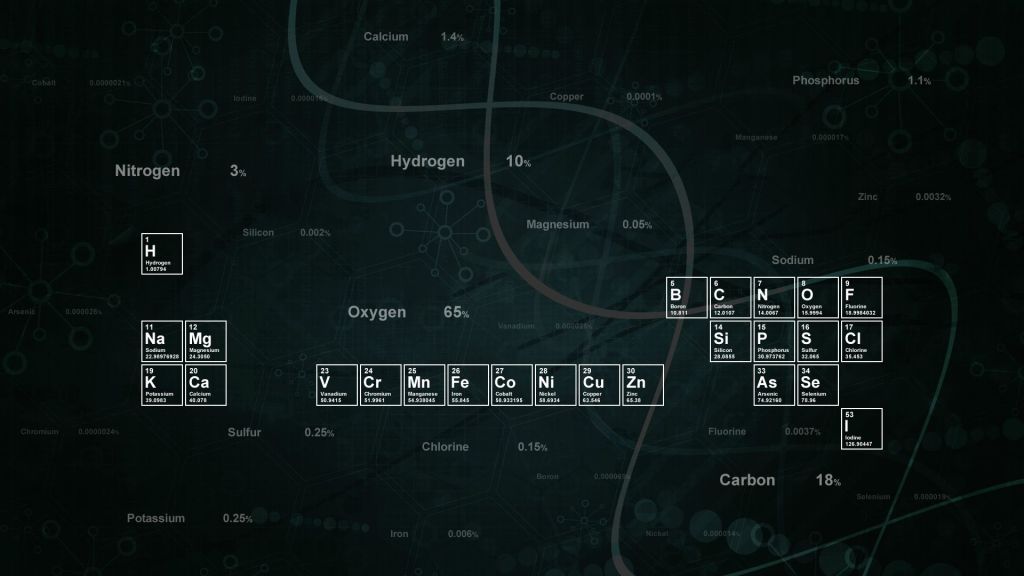 The following is an elements in a human labeled periodic table, from the online book General Chemistry: Principles, Patterns, and Applications by Bruce Averill and Patricia Eldredge: (Ѻ)

The following are some other recent human composition listings:


The following are two semi-recent elements in humans diagrams: 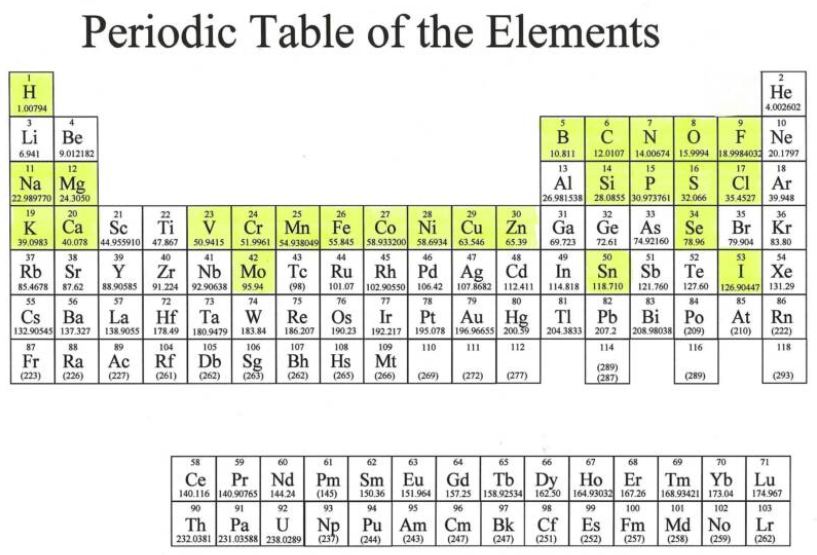 The first hmolscience periodic table, published in book format, was the 2008 "Periodic Table of the Elements of the Human Being" table, a black and white reprint of the above, showing the 26 functional elements of the human molecule, found in Thims' The Human Molecule. [2]

The following, based on Thims' calculations of the 26 elements of the human molecule, is English chemical engineering student turned biotechnologist Mark Janes' 2012 rendition of the hmolscience periodic table, in respect to his carbon entromorphology theory: [3] 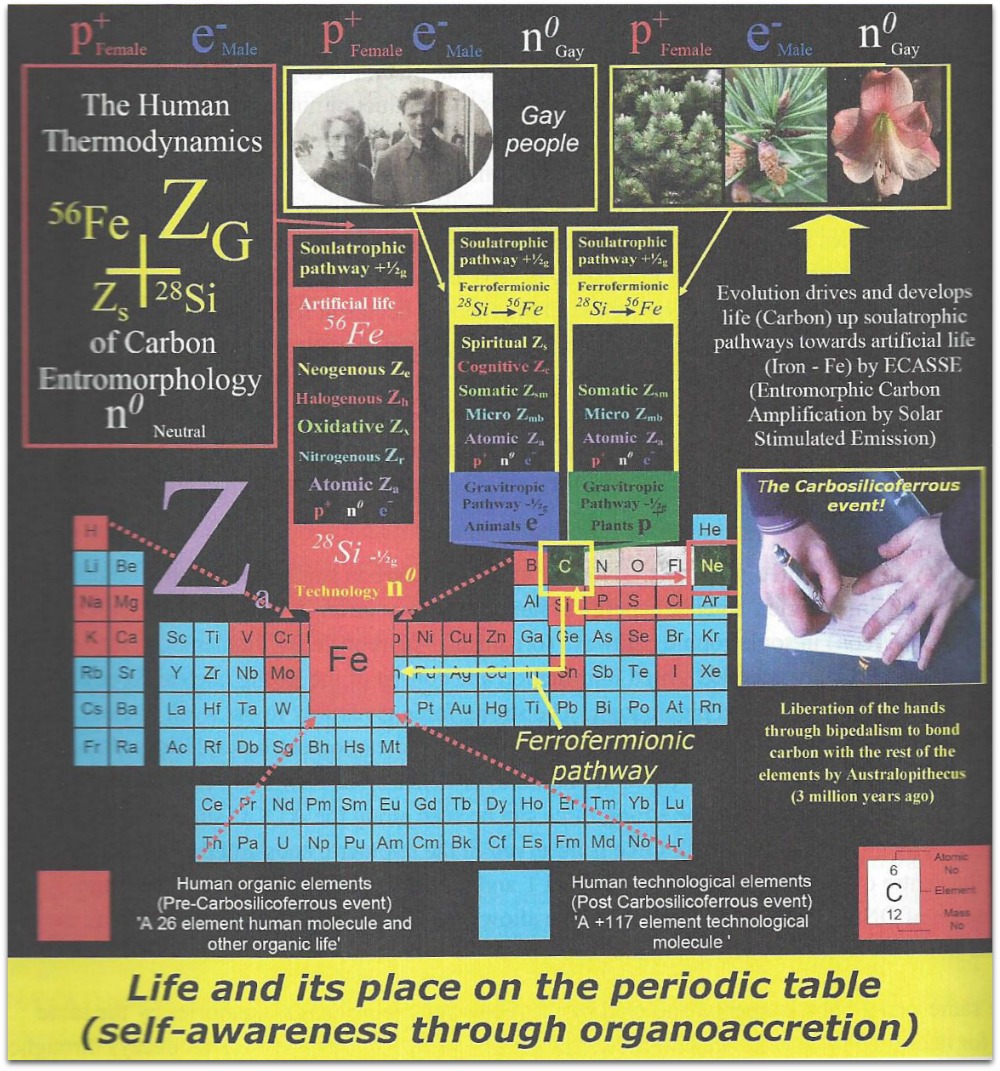