Overview
The simplest colloquial expression for this process is often shown as:

This depicts the "overall mechanism" of reproduction and is often paraphrased by the expression "love the chemical reaction".

The following is the reaction coordinate for a spontaneous reaction: 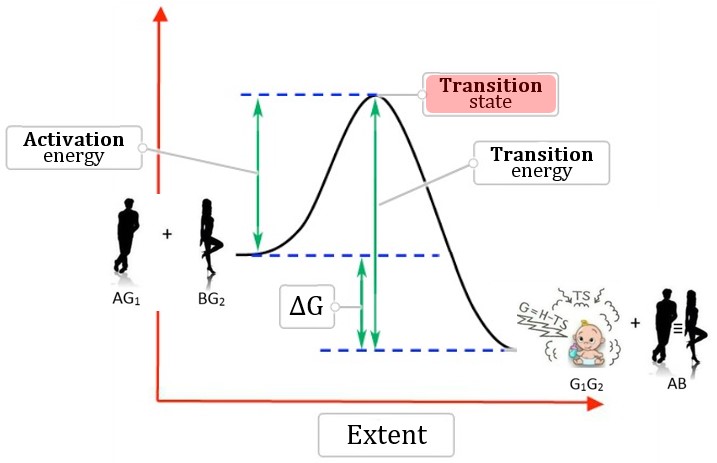 In the novella, a child, named Otto, symbol O, is conceived, through a rather convoluted "double mental adultery", as it has been called, wherein the Charlotte (A) and Eduard (B) have sex, albeit while in the act of sex thinking of someone else, namely Captain (C) and Ottilie (D), respectively. The overall mechanism of which is as follows:

The child Otto (O) produced from this "unnatural" sexual liaison, drowns by the end of the novella. The point of the novella was to highlight the battle or conflict between passion and idealized albeit unnatural morals.

Fink | Precipitate model
In 1999, Goethean studies professor Karl Fink, in his reaction analysis and of the novella, conceptualized the child to be viewed as a precipitate, symbol P or PPT. The reaction, according to Fink, resulting in the illicit child, created out of the interactions of the four friends, would follow a double elective affinity reaction of the following kind:

where the molecular entities are Charlotte (A), Eduard (B), Captain (C), Ottilie (D), and the chemical “precipitate” (P), or PPT, that becomes Otto (O). [4] Others, in recent years, particularly after reading American chemical engineer Libb Thims’ 2007 Human Chemistry textbook, have come to view a child produced out of sexual relationship as a “possible product or precipitate”. [5]

Thims | 18-year reaction mechanism
In 2003, American electrochemical engineer Libb Thims began to work out, in step-by-step detail, the reaction mechanism to reproduction, namely that it is a process that involves several key energetic steps, lasting in extent of an average eighteen years. The first step, quantified by an initial state, assumes there is an initiation of the reaction, described by collision theory, to be the point of love at first sight (or some variation of this), followed by a falling in love aspect of the transition state, ending in a final state when the child detaches from the parental structure and goes off into the world as a newly formed human molecule. [1] In particular, the basic reproduction reaction is better characterized as a double displacement reaction:

and a newly formed infant human molecule BD with slowly grows into a fully-formed human E:

Beyond this, the description becomes even more complicated, where focus on the nature of the human chemical bond A≡C comes to the fore.

The detailed mechanism of the human reproduction reaction involves a day-by-day accounting of the germ cells, as they are exchanged between partners, and slowly form into a embryo, then into a child, which for a dozen years or more remains attached to the parental structure, then begins to detach. Technically, the basic reproduction reaction, in which one child is conceived and raised into adulthood, in mechanistic terminology, is what is called a double displacement reaction, of the form shown below:

In human chemical terms, species AB, defined here as a man, symbol Mx, parts with the genetic component of his sperm, component B, symbol Sp; a woman Fy parts with the genetic component of her egg Eg; and they both emerge newly ‘transformed’ after the birth of their child, in the form of a new molecular structure, i.e. parents bonded into a working chemical relationship MxFy with an attached embryo SpEg uniting them:

Soon thereafter, still being attached significantly to the parental structure MxFy, the sperm-egg molecular entity SpEg, in the shape of what is called a morula, i.e. a globular solid mass of blastomeres formed by cleavage of a zygote, will begin to transform or grow into the structure of a young child Bc. Given time, the child will eventually begin to detach, in a predominate manner, from the parental structure:

In this manner, the newly created human molecule Bc will go off into the world as a newly formed individual. As we see, human chemical reactions are quite intuitive and very easy to depict. Do note, however, although simplistic-looking, these human chemical reactions actually embody principles and theories far greater in complexity and extent than can be detailed in this short book. It must be understood that the second-by-second mechanism underlying the above expressions, invariably, need to be explained in terms of only two components: electrons and photons. To do this is quite a tedious process and many new perspectives on life must be digested.

Jorge | Reversible reaction
In 2007, Swiss thinker Don Jorge, in what seems to be an attempt at using chemistry to explain sex humorously to his girlfriend, made a video entitled “Aufklarung: How to Learn about Sex with Chemistry”, in which he described the process of sex using the following reaction: [2]

In the video, Jorge draws the diagram on paper where he draws little sperm, with a head and a wiggle tail, moving from the male ♂ to the female ♀ and describes how “latex” can block the progress of the reaction.

, as introduced by Jacobus Van't Hoff in his 1884 Studies in Chemical Dynamics, to allude to the view that sex is a reversible reaction, as may be possibly captured in the phenomenon of a one-night-stand. [3]

Although this is an involved topic, the correct formulation is to use a one way arrow, signifying that the formation of an embryo and later an infant is an irreversible process. If, however, the couple or female decided to opt for an abortion, a completely different reaction mechanism would be used.