In chemistry, hydrogen, symbol H, atomic number 1, is a nonmetallic element, row one of the periodic table, the third the most abundant element in the person, comprising 10 percent by mass of the average human molecule.

Hydrogen is the smallest element, is an atom comprised of one proton bound, via the electromagnetic force, via the exchange force of photons, to one electron.

All elements are built from the components of the hydrogen atom. [1]

Hydrogen is the third most abundant element in the human molecule, comprising 10% of the mass of the human.

Hydrogen accounts for 88% of the atoms in the universe.

Orbital
The following is the orbital structure of hydrogen: 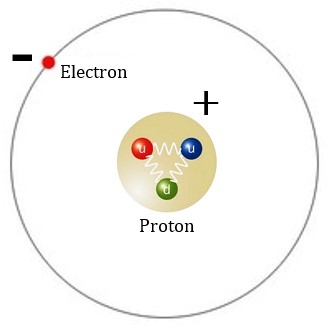 In 1988, Canadian zoologist Daniel Brooks and American systems theorist Edward Wiley, in their chapter subsection on “metaphysics of individuality”, give the following blurring statement in comparing the human or rather human molecule as contrasted with the hydrogen molecule: [2]

“A hydrogen molecule is the thing which reacts. Homo sapiens and other particular species are the things which evolve. Such individuals differ from classes by having particular origins in time and space. They may disappear or change into other things.”

This, however, is an artificial divide. The resolution of the divide requires a reinterpretation or rather reformulation of evolution theory in chemical thermodynamic terms, which is a nearly virgin subject.

“Hydrogen is a light, odorless gas, which, given enough time, turns into people.”

“Why should a group of simple, stable compounds of carbon (C), hydrogen (H), oxygen (O), and nitrogen (N), 'struggle' for billions of years to organize themselves into a professor of chemistry? What's the motive?”