In hmolscience, hydrogen to human, similar to molecules to man, molecules-to-man evolution (Kent Hovind, 2006), or the phrase molecules in motion (apologetics), refers to the shorthand statement that humans, who came into existence about 200,000 years ago, and human behavior derive from hydrogen atoms that came into existence 13.8 billion years ago.

Overview
Historically, precursors to the "hydrogen to human" conceptualization include the various the circa 330BC to late 19th century great chain of being depictions and renditions.

In the late 20th century, the "molecules to man", or "molecules-to-man evolution", as Ken Ham likes to paraphrase things, began to be catch phrase topics of discussion.

The following is a a snapshot of the "hydrogen to human" model, namely the reduction and explanation of all of human behavior in terms of the behaviors of hydrogen atoms coming into existence 13.8 billion years ago; at center: David Buss' 1994 The Evolution of Desire, which gives clues to the reduction of human desires, through evolution, down to proton, electron, photon interactions. 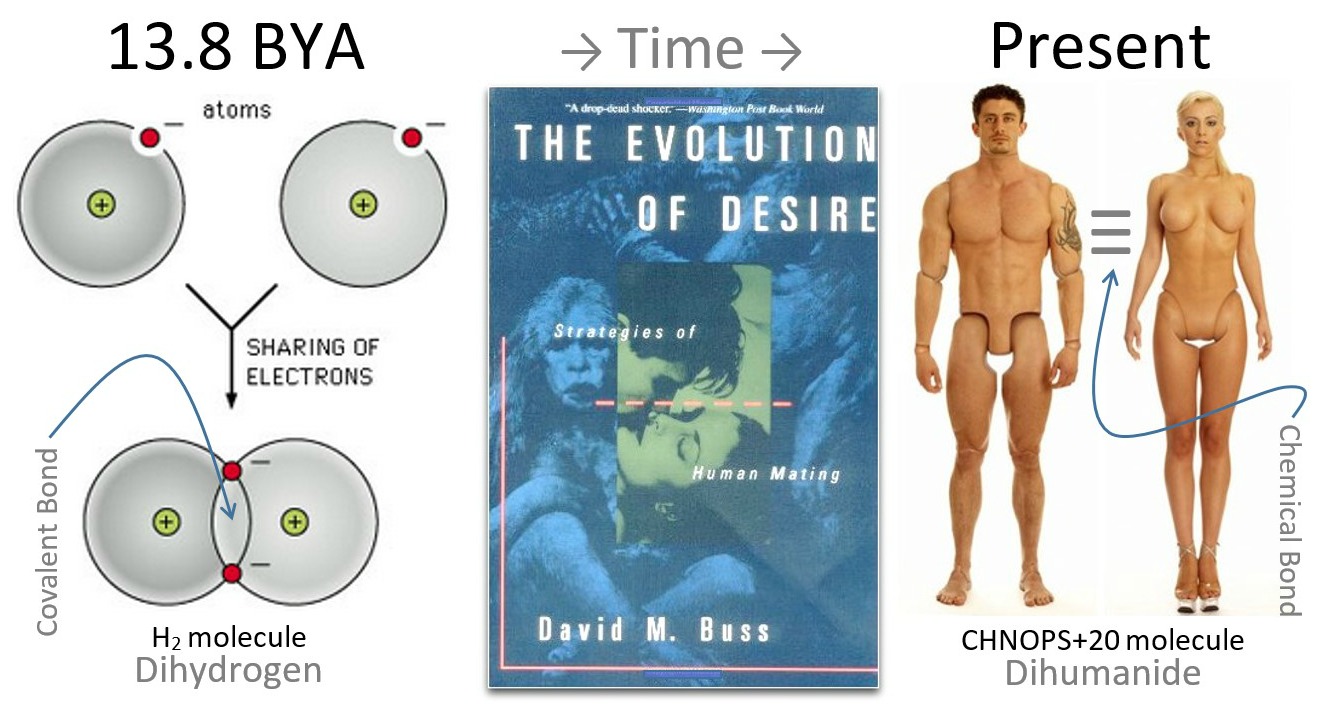 In 2012, English-born Taiwanese science teacher Peter Cook, who has a Arthur Young sort of feel to his views, did a eight-part “Hydrogen to Human” lecture starting with the big bang and standard model then going to the formation of the solar system (parts 1-2), via some type of self-organization paradigm; then gets into “life”, with discussion of viruses (part 3); then in parts 4-6 he claims to give a “standard model for life that explains all of human behaviour, from wars to serial killers; enabling one to tackle: stock markets, to breaking addiction and bringing up children.” (Ѻ) The following is Cook, in part 3 (3:57), state his belief that at about 3 billion years ago hydrogen atoms came "alive", which is the weak link in his entire presentation thus far, after which he goes on to say, "but first, I need to decide what 'life' really is? It's very difficult!? It's not an atom."

Then he goes onto say that gravity is not responsible for life, because it's too large, therefore it must be the electromagnetic force that formed life; very humorous indeed. Then discusses "properties" of atoms, e.g. magnets, then uses what seems to be a Van de Graaf generator, invented in 1929 by Roberg van de Graff, but originated in prototype of Otto Guericke (1620s), to explain that “imbalances” in the plus and minus aspects of the electromagnetic force is what produces change, and brings about the spontaneous self-assembly of life, or as he says, when the imbalances accrue, “then things start to move and change”; or, as he demonstrates, via turning on the generator, “it attracts and repels at the same time”. He goes through four demonstration experiments, in part 3 (3:57-11:30), shown above, each fairly cogent, in attempts to explain life, via photons, electrons, and atoms.

In part 4 (5:14-),he starts talking about Benoit Mandelbrot and how his iterations made the famous fractal edge Mandelbrot sets (Ѻ). At part 4 (32:57-), he mentions American evolutionary paleontologist Neil Shubin, noted for his 2006 discovery of Tiktaalik (walking fish). In part 5 (28:54-34:38), he tries to reconcile “evil”, with focus on Darwin’s wasp-caterpillar paradox, about which he says a few years back he was sitting around with his nephew in a pub discussing, but couldn’t figure out, via a conformity argument; then cites the inquisitions, Nazis, Catholic foundations, etc., as examples of good people doing bad things.

“The story of where we [humans] come from—unless you [prefer to] imagine that a big hand came down from the sky and put us on the earth—must be a story of the spontaneous self-assembly of hydrogen, and nothing else.”