In hmolscience, immoral (TR:44), as contrasted with “moral” (TR:627), refers to an act, action, or behavior said to, etymologically speaking, quicken the arrival of Mor, the Greco-Roman goddess of death; something deemed "wrong" or ethically "incorrect" in semi-modern terms.

Physico-Chemical | Morality
The following compares homosexuality vs heterosexual bonds in humans as compared to atoms: 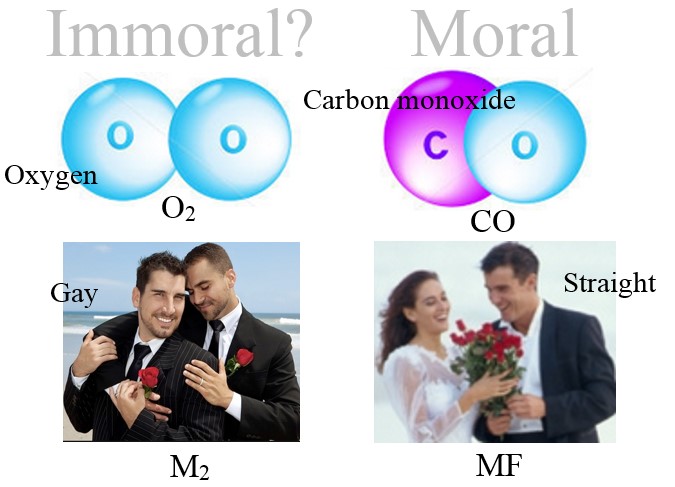 A comparison of seeming morality and or “immorality” of similar molecules, namely the so-called homosexual molecules of oxygen (O2) and gays (M2 or F2) as compared to the so-called heterosexual molecules of carbon dioxide (CO) and straights (MF); a subject first broached by Goethe in 1809 in his third chapter (P1:C3) of Elective Affinities, wherein the Captain C displaces Eduard B from his relationship bond AB with Charlotte A, to form a new friendship union BC with him; some of which was touched on by Susan Gustafson in her Men Desiring Men: the Poetry of Same-Sex Identity and Desire in German Classicism. [8]

In 1809, German child prodigy turned IQ:225+ cited genius Johann Goethe, devoted his entire Elective Affinities novella to addressing the question of Christian morality vs chemical morality, people defined as single chemicals, e.g. A or B, or couples, e.g. BC, with specific focus on the irreconcilabilities of the two in regards to the sixth commandment (of the Ten Commandments of the Bible); some of which was later expanded on by Arthur Schopenhauer (1817/1844) and Otto Weininger (1903).

In 2001, American child prodigy turned IQ:225+ cited genius Christopher Hirata, in his “The Physics of Relationships”, addressed the subject of human chemical reaction theory, explained via chemical thermodynamics, wherein he touched on the possibilities of “rare and non-traditional” products or compounds, i.e. human molecules, dihumanide molecules, or trihumanide molecules, etc., that may form, such as “the gay molecule Y2, the lesbian molecule X2, and the middle-Eastern polygamous molecule X4Y.” 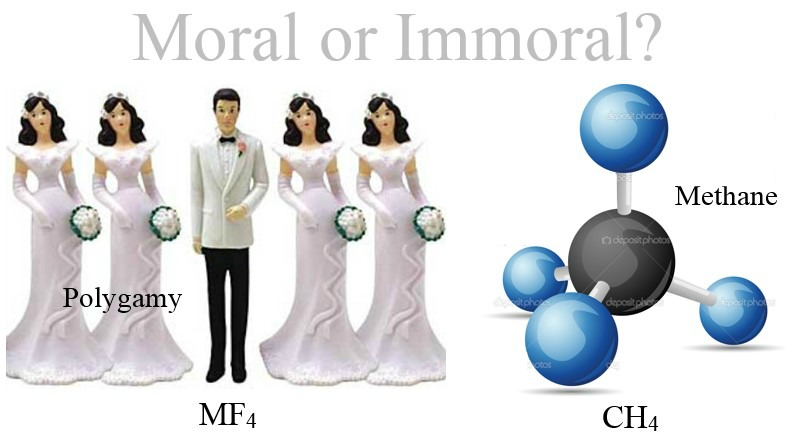 In 2007, American electrochemical engineer Libb Thims, in his Human Chemistry, devoted a chapter section to queer chemistry and homosexual chemistry is; discussing how chemistry involved in qay relationships will differ than as compared to typical homosexual relationships. In a typical gay relationship, such as, for instance, in the human chemical bonding of two homosexual men: [5]

the neurochemical and hormonal changes will, invariably, be different than as compared to straight heterosexual bondings A≡B. As such, it is likely that factors, such as energy and entropy changes, will be different to describe, thermodynamically, than as compared to straight dynamics. Homosexual relationships, for instance, tend to be shorter-lived than homosexual relationships, hence reaction rates and chemical bonding dynamics will differ.

In 2014, American atheist electrochemical engineer Libb Thims, amid the two-month long Beg-Thims dialogue, got into a tensioned debate with Pakistani Islamic organometallic chemist Mirza Beg about whether or the formation of the dihydrogen molecule H2 is moral or not say as compared to a male-male dihumanide molecule M2, being that the Quran explicitly states that homosexuality is immoral, and Beg thinks the will of Allah is behind his Islamic-based version of physicochemical sociology, according to which whatever new insights about morality we may glean from physical chemistry, we must always side with the divined proscriptions of the Quran.

Here, the keen words of Barack Obama (2006) come to mind, in respect to dispute resolution: [7]

“Democracy demands that the religiously motivated translate their concerns into ‘universal’, rather than religion-specific, values. It requires that their proposals be subject to argument, and amenable to reason. I may be opposed to abortion for religious reasons, but if I seek to pass a law banning the practice, I cannot simply point to the teachings of my church or evoke God’s will. I have to explain why abortion violates some principle that is accessible to people of all faiths, including those with no faith at all.”

“A women friend of mine said to Goethe at that time: ‘I cannot approve of Elective Affinities, Herr von Goethe; it really is an immoral book!’ According to her report Goethe was silent for a while and had then said with great earnestness: ‘I’m sorry you feel that way. It is my best book, and don’t think that this is the mere whim of an aging man. I grant you that one loves most deeply the child of one’s last marriage, the product of one’s late power of generation. But you wrong me and the book. The principle illustrated in the book is true and not immoral. But you must regard it from a broader point of view and understand that the conventional moral norms can turn into sheer immorality when applied to situations of this character.”

“Whenever morality is based on theology, whenever the right is made dependent on divine authority, the most immoral, unjust, infamous things can be justified and established. Morality is then surrendered to the groundless arbitrariness of religion.”

“Thermodynamics provides the physical possibilities for the actions that we consider both virtuous and immoral.”