In atheism types, implicit atheism, as compared to “explicit atheism”, can be defined as either absence of theistic belief without a conscious rejection of it (George Smith, 1979) or conscious rejection of theistic belief “implied” in the work or views, i.e. to involve or indicate by inference, or necessary consequence rather than by direct statement, e.g. when a natural science professor teaches a subject such physics or chemistry, it is "implied" without saying, i.e. it is an assumed given, that no divine is involved in any way what so ever. [1]

Thimsian atheism
An example of "implicit atheism" turned "explicit atheism" can be found in the growth of the work of American electrochemical engineer Libb Thims, who in his 2007 two-volume Human Chemistry textbook completely avoided the use of the word "god" and god-related terms, e.g. soul, spirit, etc., except for the last 7-page volume two end section on cessation thermodynamics, a short introduction to what, historically, thermodynamics, and human thermodynamicists have had to saw about the laws of thermodynamics and question of the essence of being or state of mind of a person at the point of dereaction (death), wherein the subject matter invariably treads into domain traditionally reserved for religion. [2]

In 2010, Thims, while adhering to an “implicit atheism” style of presentation, using the standard 19th century established Laplace-Wislicenus “assumed atheism” modus operandi, such as depicted (above, right), Thims gave his first public lecture on human thermodynamics, to the University of Illinois, Chicago bioengineering students, of Ali Mansoori. What was discovered, however, was that without “explicitly” and openly digressing on the fact that thermodynamics is, by definition, based on godless and religion-free principles, students kept their objections and points of concern to themselves. This was evidenced when Mansoori instructed students as part of their homework to write short commentaries on Thims’ presentation, scans of which are listed here (Ѻ); one of which is shown below: 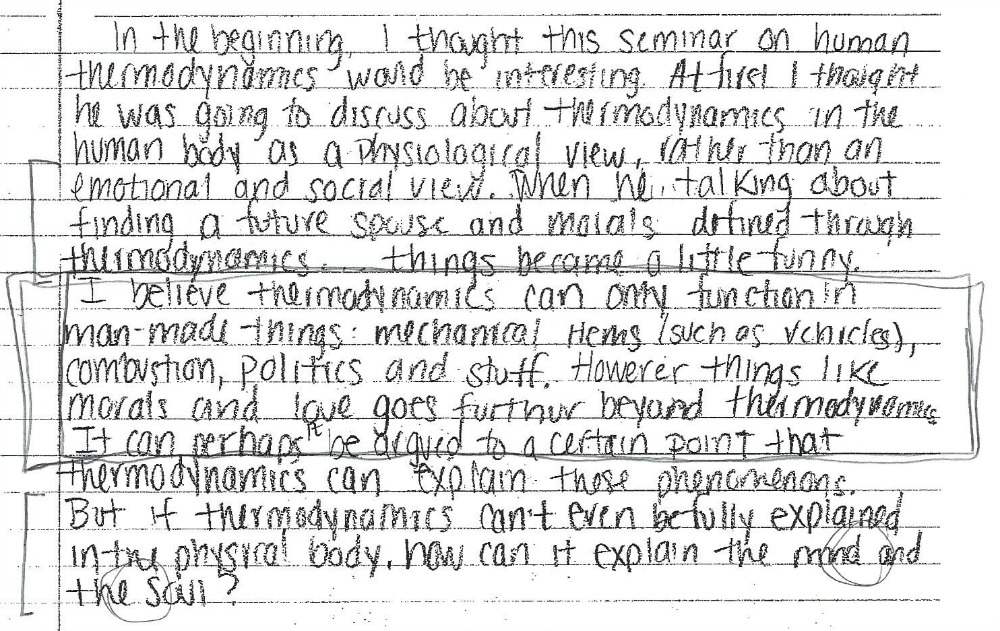 Here, we see that without being explicit and open about that fact that thermodynamics, physics, and chemistry are god-free subjects, an unaddressed tension remains. This was one of the turning points that worked to move Thims, in circa 2014, into becoming an explicit atheist; see, e.g., the tabulated listing of "atheism types (by denial)" wherein each denial (disbelief) and belief (creed) of each type of atheism, with respect to each type of scientist, is "explicitly" stated.