In engineering, indicator, or “recording pressure gauge” (Croft, 1922), is an instrument for obtaining a diagram or graph, aka “indicator diagram”, of the pressure-volume changes in a running positive displacement heat engine, compressor, or pump cylinder during the working cycle. [1] An indicator is the instrument which produces a graphic record of the pressure (vertical axis; y-axis) of the fluid in a cylinder for every position of the piston, a position that can be formulated as volume (horizontal axis; x-axis), as it reciprocates. [2]

Overview
In 1792, Davies Gilbert was claiming and or demonstrating or speaking about, in court, in defense of the patent status of the work or efficiency of a Hornblower engine (1781), some type of Newtonian calculus based integration of the.

In 1796, James Watt, and his employee John Southern, spurred on by the court proceedings of Gilbert, developed a work measurement tool and "indicator", as shown below (Science Museum, London), which is a device that made an "indicator diagram", a chart of the pressure of the steam in a cylinder plotted out against the steam's volume, which they used to exactly quantify the work produced by a steam engine: 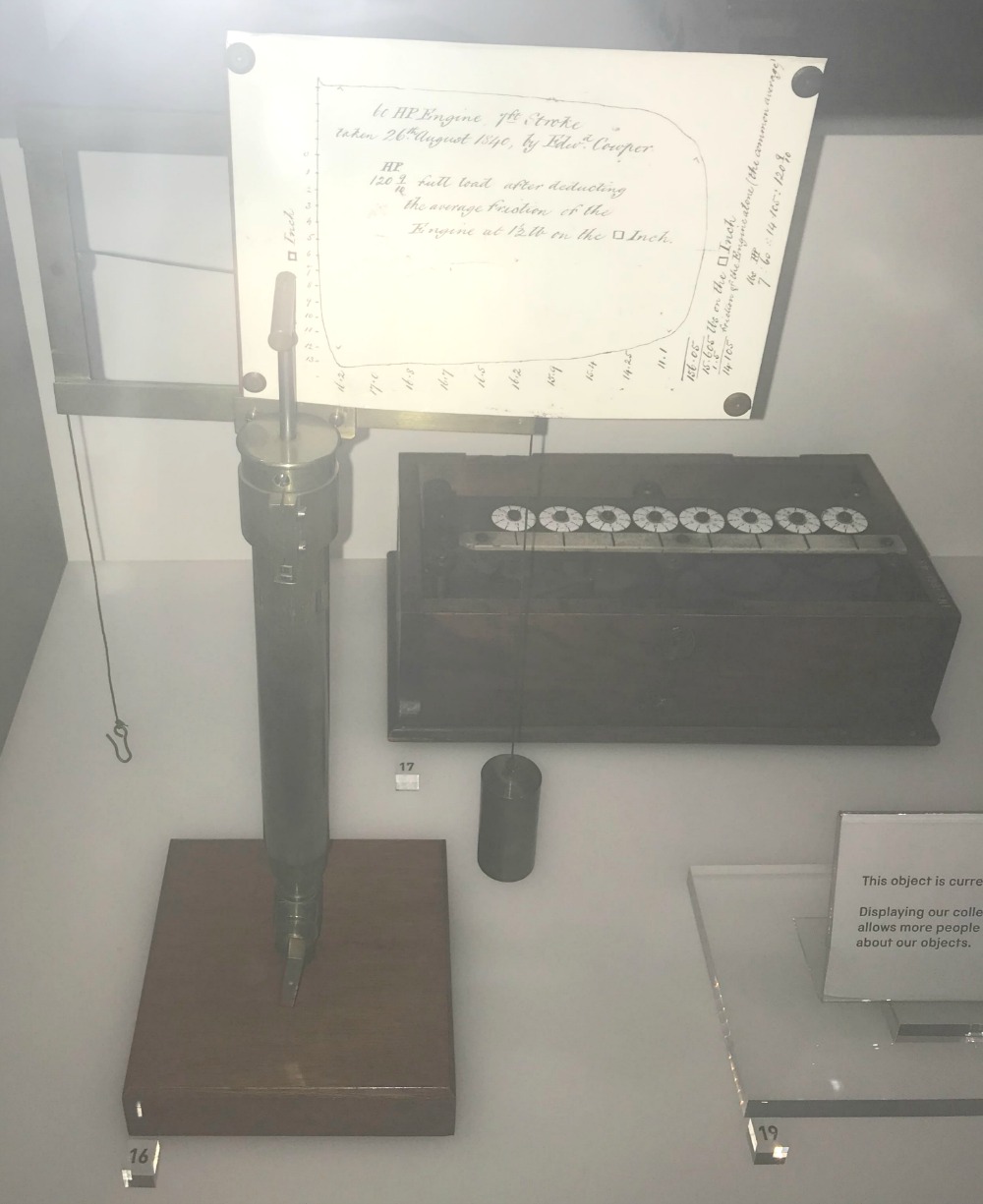 In 1797, John Robinson, in his “Steam-Engine” article, in Encyclopedia Britannica, supposedly, gave the following illustration (check: image below is from Donald Cardwell (1971)), in some form or another, of the Watt-Southern indicator diagram: 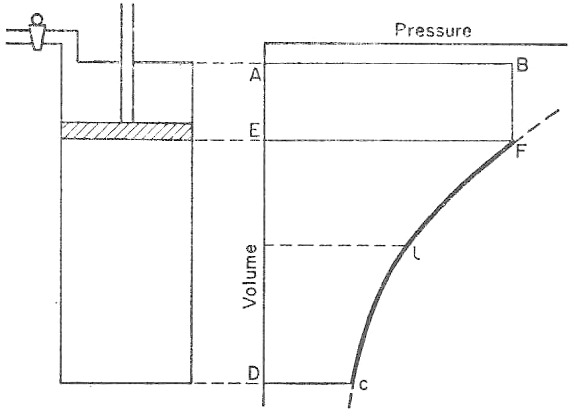 about which he commented the following:

and the whole area:

It having been granted that FLc is a rectangular hyperbola.”

In commentary on this, Donald Cardwell (1971) points out that although this “remarkable analysis” soon came to be much-admired by contemporary writers on the steam engine, Robinson, as he commented in a letter to Watt, knew of Davies Gilbert’s earlier 1792 analysis of a similar nature.

The following, made by Terrell Croft (1922), is an-illustrated diagram of the Watt-Southern indicator or "Watt indicator" as commonly called: [10] 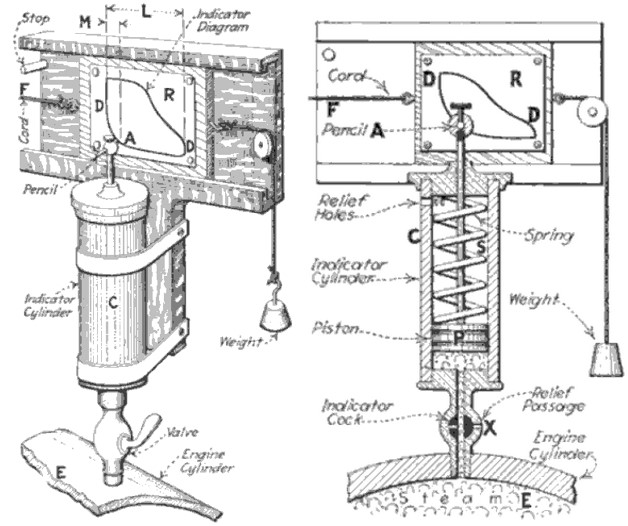 The location of “crosshead”, which connects to cord F, which moves the indicator board R back and forth, is illustrated adjacent.

Reducing motion
Because the indicator board only moves 4 to 6 inches typically, and the piston stroke moves about 2 to 14 feet, depending on design, the chord itself connects to the crosshead via what is called a "reducing motion" mechanism, whereby a mechanism scales the movement of the board, so that it moves about one-inch per every foot of stroke, depending. There are four types of "reducing motion" mechanism, of which the simplest was the "pendulum lever method", as shown below, whereby the cord of the indicator board is attached to a pendulum lever, which attaches to the crosshead, designed such that connecting link C is about half the piston stroke length L: [14] 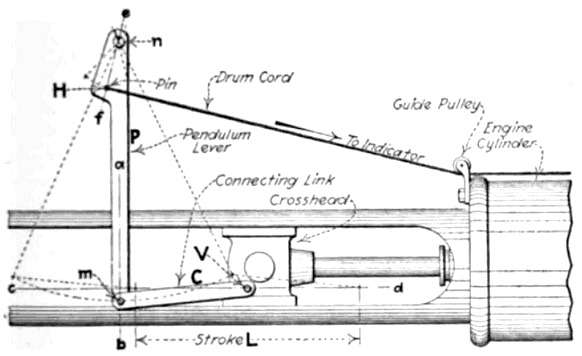 The following is a synopsis of the reducing motion mechanism:

The following diagram illustrates the basic operation of the Watt-Southern's indicator: 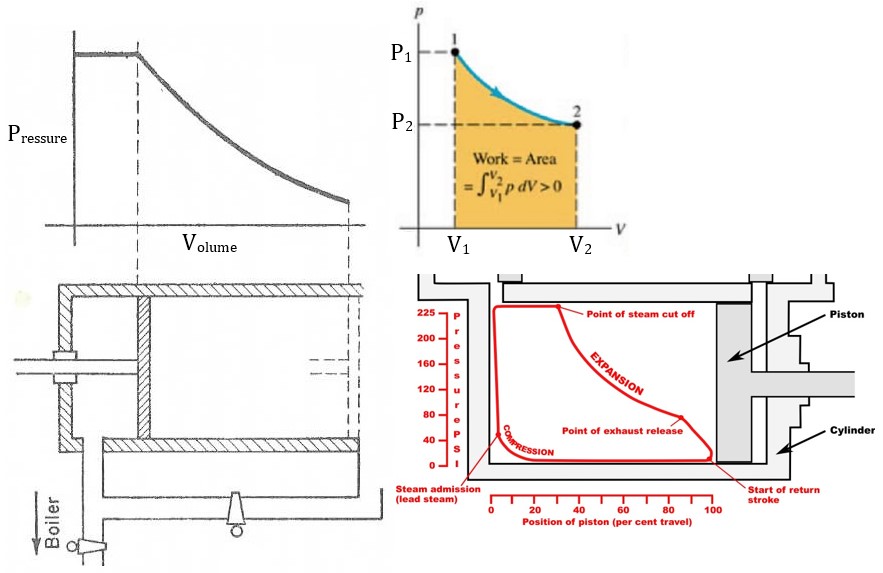 In short, Watt or Boulton used a manometer to measure the "pressure" inside the piston at each point in the expansion or contract, which made vertical marks, via a pencil, on the y-axis, of an horizontally moving board, and attached a string of some sort, shown above, connecting the horizontal movement of the board to the up and down motion of the piston head, i.e. to the volume of the working body; the following is another synopsis of this:

“It was simple enough. A sheet of paper is pinned to a board, which moves to and fro with the reciprocating motion of the piston; at the same time a spring-loaded pressure gauge causes a pencil, held in a lever arm, to move at right angles to the motion of the board. As a result, the pencil automatically traces out the curve, relating the ‘pressure’ of the steam in the cylinder to the change in ‘volume’; that is to say it traces out the ‘indicator diagram’.”

In 1822, H.H., an anonymous writer, in the Quarterly Journal of Science, in his article “Account of a Steam-Engine Indicator”, based on details of the device given by a “Mr. Field”, gave the first, supposed, public summary of the details of both the indicator, shown below: [9] 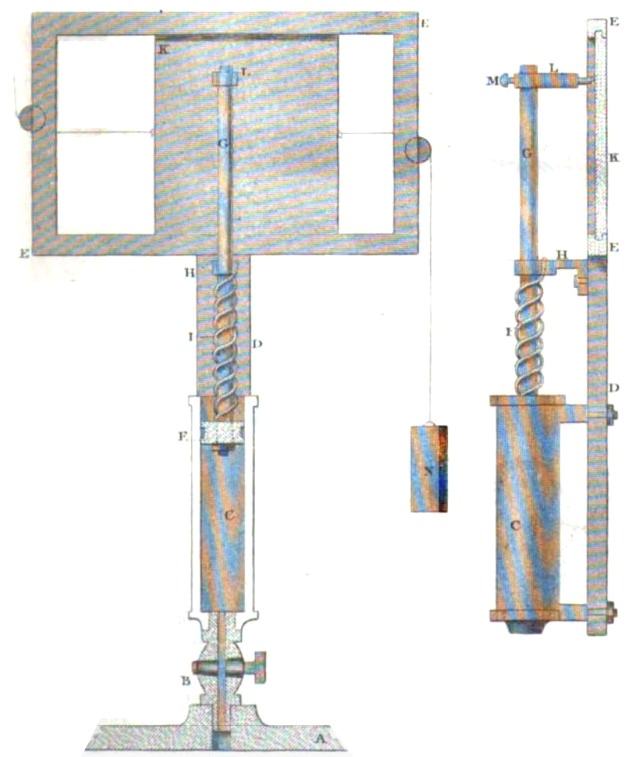 As well as an example of the PV diagram or indicator diagram that the device made, shown below: 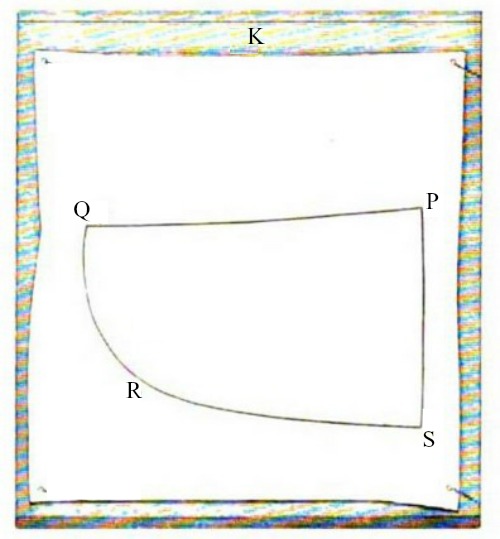 The following is an indicator diagram for a Ranking cycle, by Terrell Croft (1922), which seems to show that the pencil of the indicator is first put at point Q on the diagram, then valve V1 is opened, letting steam in; but then at P, V1 is closed, at which point expansion occurs, the working body pushing the piston along curve PS, at the end of which valve V2 is opened, the steam exits to the condenser, whereby the vacuum then forms, via contact with the cold water (cold body) of the condenser, at which point the piston does returns to the top (upstroke), along curve SR, and at point R, valve V2 is closed, and the piston volume "compresses" along RQ, or something along these lines: [11] 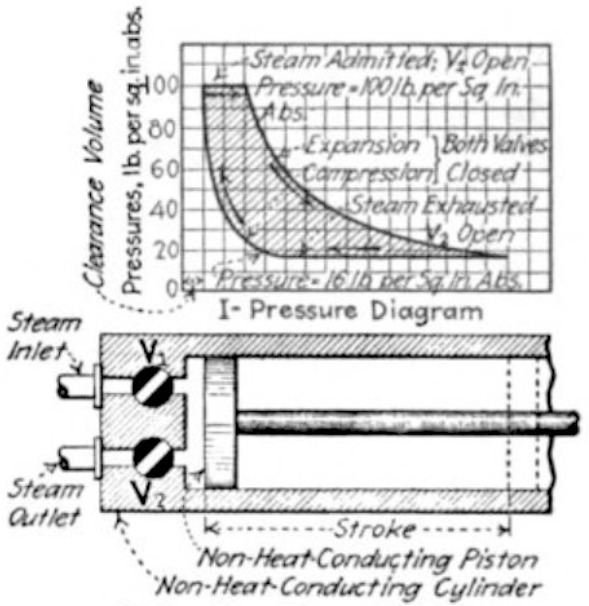 Other
Southern is generally credited with being the one to developed the simple, but critical, technique to generate the diagram by fixing a board so as to move with the piston, thereby tracing the "volume" axis, while a pencil, attached to a pressure gauge, moved at right angles to the piston, tracing "pressure". The gauge enabled Watt to calculate the work done by the steam while ensuring that its pressure had dropped to zero by the end of the stroke, thereby ensuring that all useful working potential had been extracted.

Details of the "indicator", of note, remained a "trade secret" for many years.

In 1826, John Farey learned of the indicator when he saw one being used on an engine in Russia. [6] When he returned to England, he arranged with a man named William McNaught from Glasgow, Scotland, to build indicators for him. [12]

Types
In 1901, there existed a number of types of indicators; Crosby indicator, Richards indicator, Thompson indicator, Tabor indicator, and Lyne indicator, being among the best, according to William Levan. The following, e.g., a McNaught indicator (c.1830), built by William McNaught, per request of John Farey, a new type of cylinder indicator, consisting of a small hollow cylinder A that is screwed on the cover of the steam cylinder. [4] 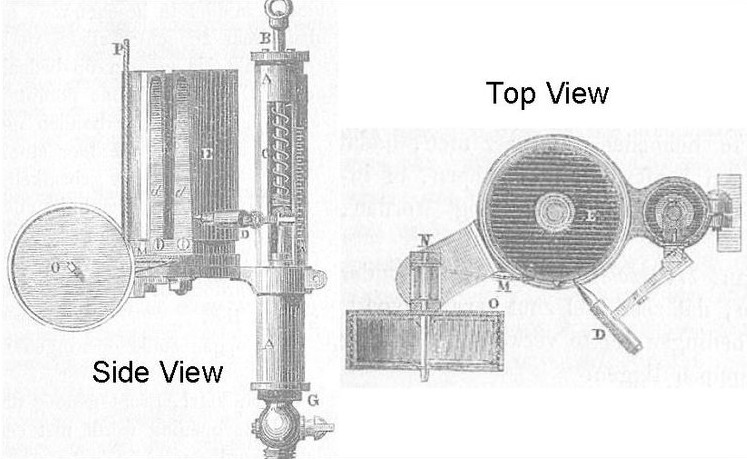 McNaught's big contribution to the design of the indicator was the replacement of the flat board that held the paper, or "card" as it was called, with a rotating drum.
As the engine speeds increased, the inertia of all components of the indicator became increasingly important. The rotating drum could be made much lighter and consequently could be accelerated, decelerated and reversed much more easily than the bulky board. The rotating drum was a feature of every mechanical indicator that was built in the following century or more until optical and electrical instruments made the mechanical devices obsolete. [12] The following compares a Watt indicator with a Thompson indicator: [14] 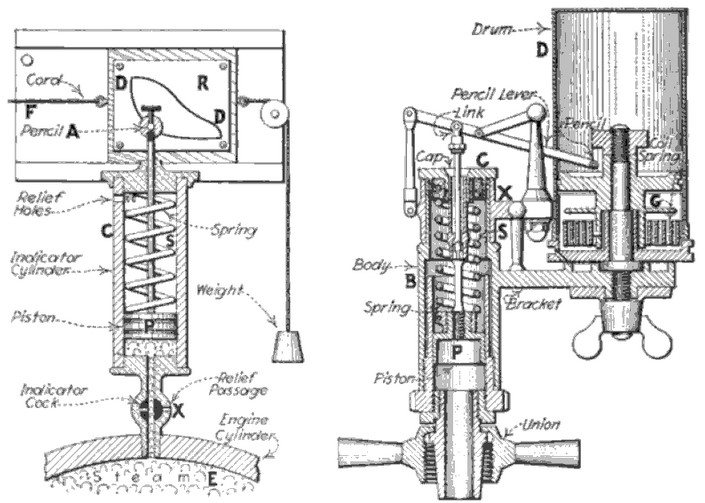 Thermodynamics
The functionality of the indicator diagram was later incorporated into a graphical analysis, shown below (right), by French engineer Émile Clapeyron in 1834 to determine the work done by the steam, as signified by the area found within the region abcd, using calculus: [3]

This amount of graphical area soon came to be known as "pressure-volume work" and this graph became a central fixture in the science of thermodynamics, especially through the detailed work of German physicist Rudolf Clausius. [5]

“I am like a man parched with thirst in the expectation of relief, or a woman dying to hear (or tell) a secret, to know Southern’s mode of determining the power.”

“In the hands of a skillful engineer, the indicator is as the stethoscope of the physician, revealing the secret workings of the inner system, and detecting minute derangements in parts obscurely situated, and it also registers the power of the engine.”