In thermodynamics, indicator diagram, or "indicator card" (LeVan, 1901), is a line tracing on a sheet of paper made with an indicator that yields a pressure (x) volume (y) plot of the work of a steam engine.

History
In 1764, Watt, puzzled by the breakdown in the “law of mixtures” in respect to calculating the efficiency of steam engines, based on four datum points, shown by circle dots below, made the following PT graph: [4] 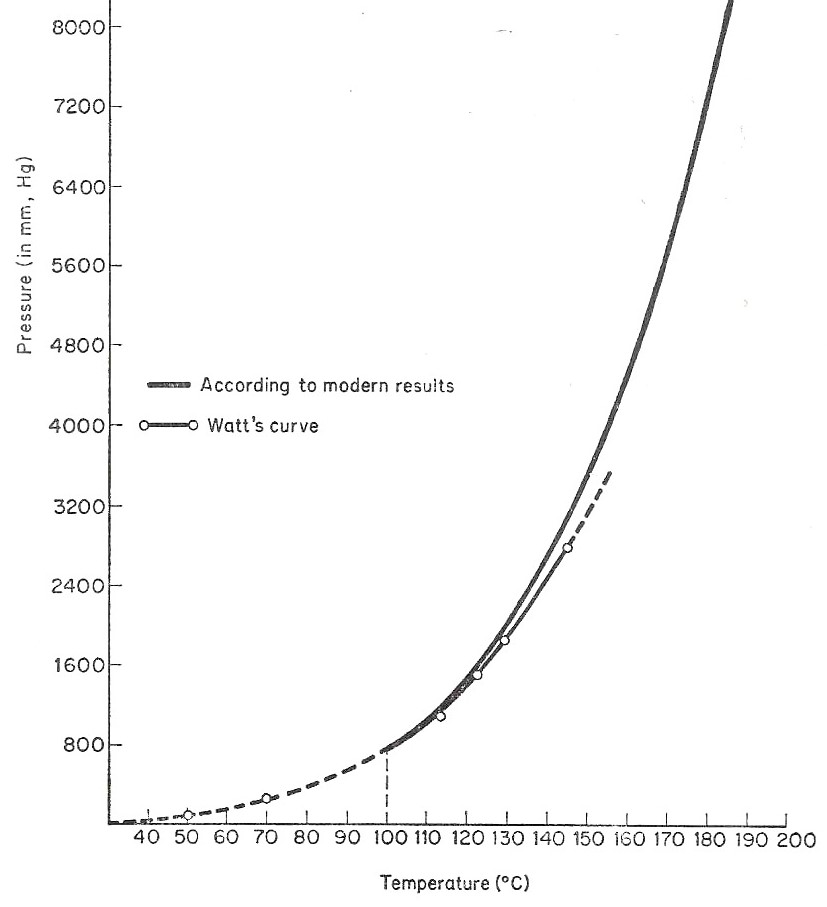 On this graph, Watt commented:

“From these elements I laid down a curve in which the abscissa [y-axis] represented the temperatures and the ordinate [x-axis] the pressure, and thereby found the law by which they were governed sufficiently near for my then purpose.”

In 1792, Davies Gilbert was claiming and or demonstrating, in court, some type of calculus-based integration of the work or efficiency of a Hornblower engine (1781).

In 1803, the following indicator diagrams were on ‘Mr. Houldsworth’s Engine’ in Manchester: [2] 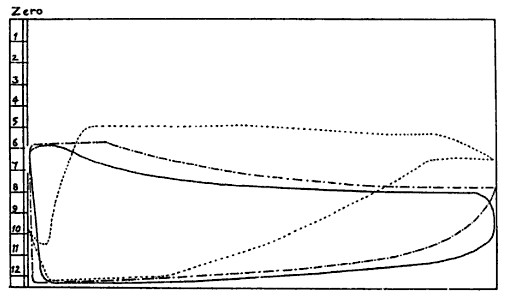 In 1901, William LeVan, in his The Practical Management of Engines and Boilers (pgs. 181-0, gave the following "indicator card" as he called it: [6] 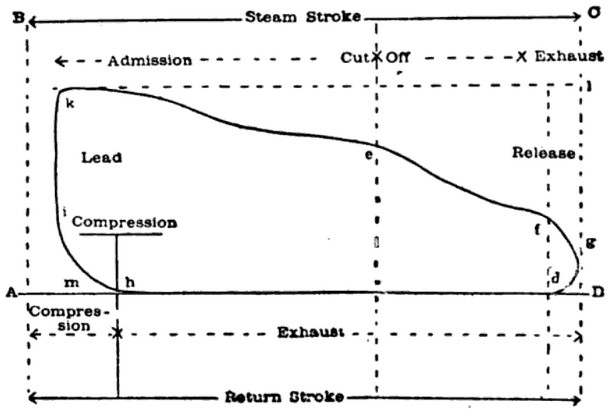 which he described as follows:

“The utility of the indicator is shown in the indicator card (above figure). The base line AD is the line of atmospheric pressure, m D represents the stroke of the piston, and the irregular space m, k, e and d, may be supposed to be the interior of the cylinder. The heavily lined figure k, e, f, g, d, h and i is a diagram ‘indicated’ action of the steam, when the piston moves in the cylinder at an average speed of 100 feet per minute [1.7 feet/second], and shows by its angularity how the steam is controlled by the valve, and the precise points of the stroke at which the changes of the distribution take place The piston is represented as having started from the left-hand end of the cylinder, under an initial steam pressure of 45 pounds per square inch above the atmosphere, the line of pressure being traced from the upper left-hand corner it, until it reaches the point e of cut-off.

The admission of steam being terminated [point e], the period of expansion is commenced, the pressure falls as the piston advances before the expanding steam, and continues to do so until the piston reaches the point of release. At this point the piston enters on its third and last state of progress toward g, the end of the stroke; the steam primarily admitted at 45-pounds above the atmosphere, and reduced to 15-pounds pressure previously to being released [point f], quickly discharges itself into the atmosphere, by its elasticity, and is entirely discharged before the end of the stroke, as indicated by the rapid fall of the steam line during the period of exhaust towards the point g. The exhaust is, however, only relative, not absolute, as steam of atmospheric pressure remains in the cylinder, during the return stroke; therefore, the valve ought to maintain the exhaust end of the cylinder continuously open, to allow the steam of one atmosphere of pressure to escape from before the returning piston.

The benefit of this provision is proved by the diagram, in which it appears that during the continuation of the exhaust, the steam of latent pressure remains at the zero point of the scale; at the instant the exhaust valve closes [point h] at the point of compression h, and there is no longer an exit for the latent steam before the piston, the exhaust line commences to rise upwardly towards the left hand side, and the steam is compressed against the end of the cylinder. While the volume of the compressed steam is being thus forcibly reduced, the pressure is increased; the pressure is raised until the accumulation of back pressure so induced is merged at i, with the boiler pressure of the steam admitted at this point by lead during the remainder of the return stroke for the supply of the next stroke.”

The following is simplified view (Ѻ) of the Watt indicator diagram, showing the location of the piston in respect to point E, wherein the steam valve is cut off, the arrows showing the force of the steam pressing on the piston head, after which the piston continues to move to point F, with its pressure dropping along the way: 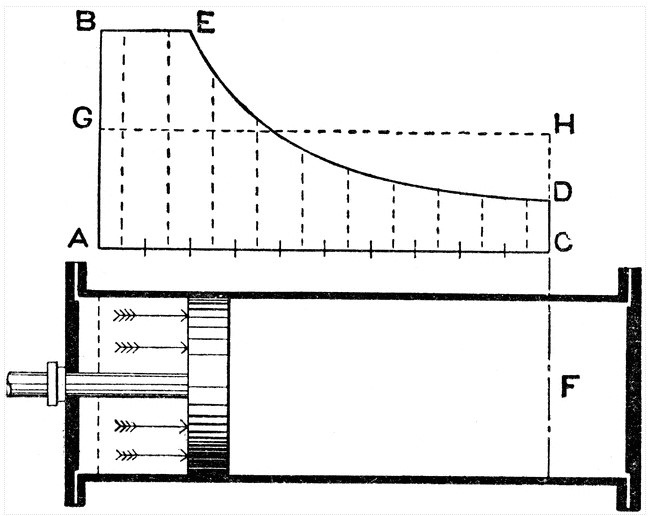 The following is an indicator diagram (Ѻ), with an illustration of the position of the piston (working body or "substance" inside the piston and cylinder) , hot body (boiler), and cold body (cool water), for points A, B, C, D: 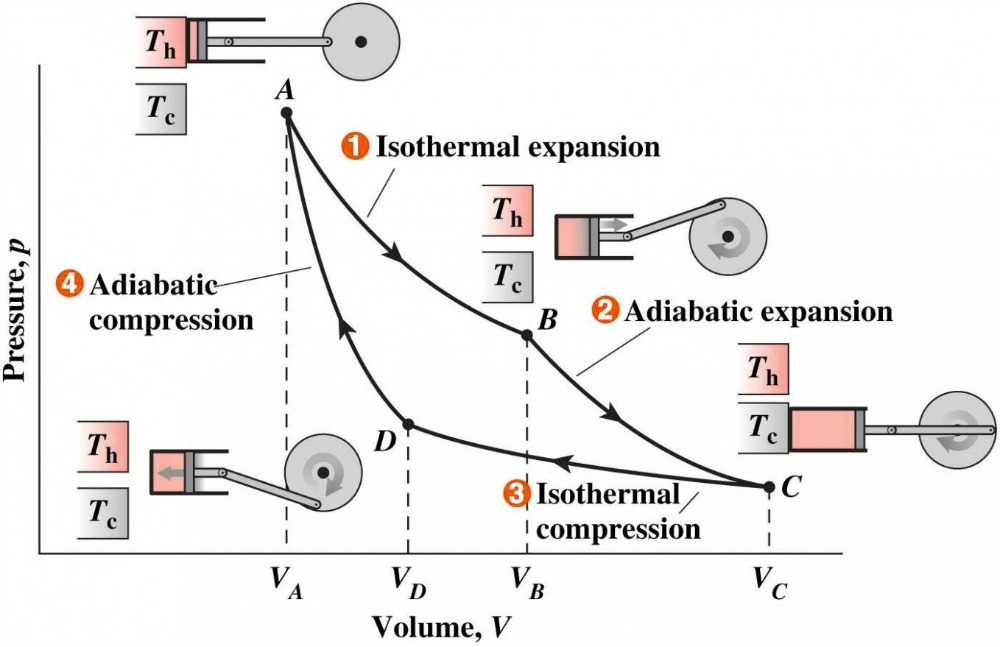 wherein, of note, we can see how the oft-confused term “adiabatic” simply means that the piston is not in contact with either the cold body or the hot body.

Thermodynamics
In 1834, Emile Clapeyron, expanding on the work of Sadi Carnot (1824), began to employ indicator diagrams, in a proto-thermodynamics sense, thereby turning them into what modern thermodynamicists now call "pressure volume diagrams" or PV diagrams, representative of the Carnot cycle. [3]

“Watt had envisaged the principle of expansive operation as early as 1769, and Hornblower, quite independently and at some unknown later date, had hit on the same thing. Hornblower had been the first to patent the principle, in the form of the ‘compound engine’, and Gilbert had been the first to analyze it theoretically. The theory of the ‘indicator diagram’, which was formulated by Gilbert in 1792, led to the practical invention of the instrument by John Southern in 1796.”