In religion, intelligent design, or ID, a post-1987 synonym for creationism or "creation science", refers to the model that humans were designed by god and not be evolution; a post-2005 synonym is "sudden emergence", terminology change arising owing to US court rulings on violations of the establishment clause of the first constitution in public schools. 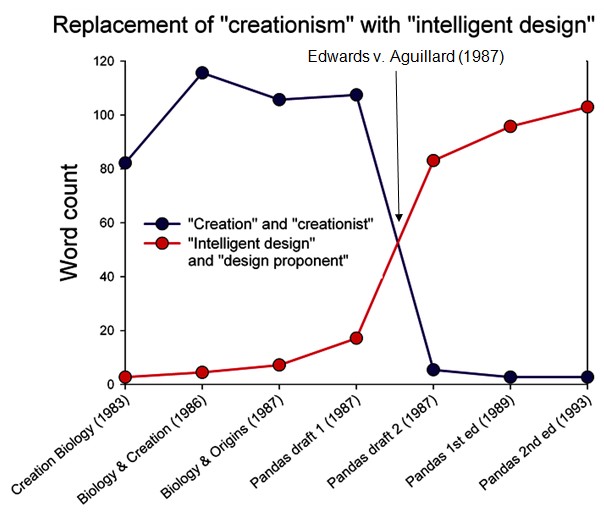 This book was renamed as Of Pandas and People in the 1989 edition, later famously becoming the focus of the 2005 Kitzmiller v. Dover, over a Dover, Pennsylvania, school board ruling to begin teaching intelligent design (Biblical creation theory) to 9th grade high school biology students as an alternative to evolution. [1]

American mathematician-theologian William Dembski has defined “intelligent design” as the Logos theology of John’s Gospel restated in the idiom of information theory. [4]

Thermodynamics
In post 1990s publications, one will occasionally see terms such as ID or intelligent design mixed up in discussions with thermodynamics, such as in the origin of life, the second law, order vs disorder. [3]

Intelligent design | → Emergence
Religion, in its efforts to get its foot in the door of science, seems to be the classic example of a terminological shapeshifter. Humorously, just as McLean vs Arkansas (1982) worked to label the term “creation science”, or scientific creationism (or simply creationism), of the Henry Morris and John Whitcomb The Genesis Flood (1961) variety, unconstitutional, for use in public school curriculum; a subject matter, which, following the Edwards vs Aguillard (1987) decision, became reclothed, in Of Pandas and People (the first edition of which (Ѻ) entitled Creation Biology, 1983), via the label “intelligent design”; so to has the Kitzmiller vs Dover (2005) decision worked to bring about a new for god-based science, namely: “emergence”, which journalist Lauri Lebo (2008) reports as follows: [5]

“A draft of Pandas and People’s sequel, The Design of Life, had been previewed during Dover’s trial (2005). Just as Foundation for Thought and Ethics substituted the word ‘creationism’ with ‘intelligent design’—following Edwards vs Aguillard (1987) —throughout versions of Pandas, this edition substituted ‘sudden emergence’ for ‘intelligent design’. This prompted Rothschild to ask Michael Behe during cross-examination, ‘will we be back in a couple of years for the ‘sudden emergence’ trail.”