The lotus closes at night and sinks underwater. In the morning, it re-emerges and blooms again. Thus, the flower, like the baboon and the dung beetle, became a natural symbol of the sun and creation.

In Hermopolis, as recounted in Heliopolis creation myth, it was believed that there was a giant lotus blossom that first emerged from the primordial waters of Nun and from which the sun-god came forth.

The following shows Chapter 81A "For Being Transformed into a Lotus" of the Ani-version (1250BC) of the Egyptian Book of the Dead, showing Ani, after his death, being reborn, like the sun gods Horus and Ra, out of an opening Lotus: 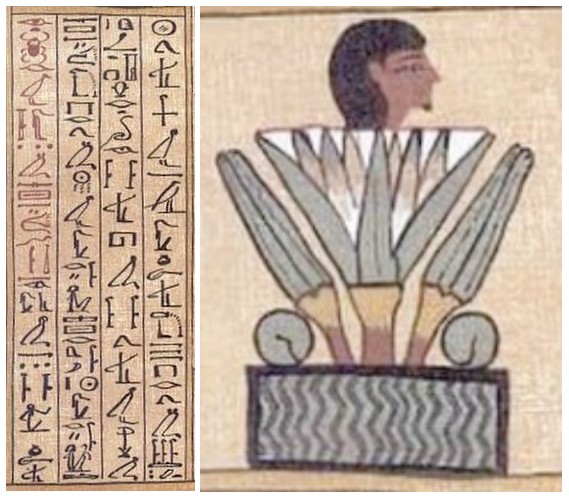 The following is Raymond Faulkner (1972) translation of the text of this chapter:

“I am this pure lotus which went forth from the sunshine, which is at the nose of Ra; I have descended that I may seek it for Horus, for I am the pure one who issued from the fen.”

Some (Ѻ), to note, incorrectly label the man’s head as Ra.

Horus
This so-called “great world lotus”, as Wallis Budge (1904) refers to it, is one of things, among the various Egyptian mythologies, out of which the sun rose for the first time. [4]

The specific “Horus” shown above, is the Heru-Sma-Taui, Horus #9, according to Budge classification, aka “Horus the Uniter of the South and North”, defined as the son of Hathor, who was believed to spring into existence out of a lotus flower which blossomed in the heavenly abyss of Nu at dawn at the beginning of the year. This version of Horus was worshipped at Aat-hehu, a district near Herakleopolis Magna (nome #19, Upper Egypt), Ant (Denderah) (nome #6, Upper Egypt) (Ѻ), and the city of Khatat. [4]

The head of a man coming out of the lotus, above left, comes from a vignette of the Theban recension of the Book of the Dead, which Budge describes as follows:

“In From Chapters lxxxi., versions A and B, we learn that the deceased had power to transform himself into a lotus; in the first version of the text he says, "I am the pure lotus which springeth up from "the divine splendour that belongeth to the nostrils of Ra," and in the second we read, "Hail, thou Lotus, thou type of the god "Nefer-Tem! I am he who knoweth you, and I know your "names among the gods, the lords of the Underworld, and I am "one of you." The vignette of the first version is a lotus, and that of the second is a lotus plant with a flower and buds growing out of a pool of water, and out of the flower springs a human head, i.e., the head of the deceased.”

The four sons of Horus, to note, are often shown on a rising lotus. (Ѻ) 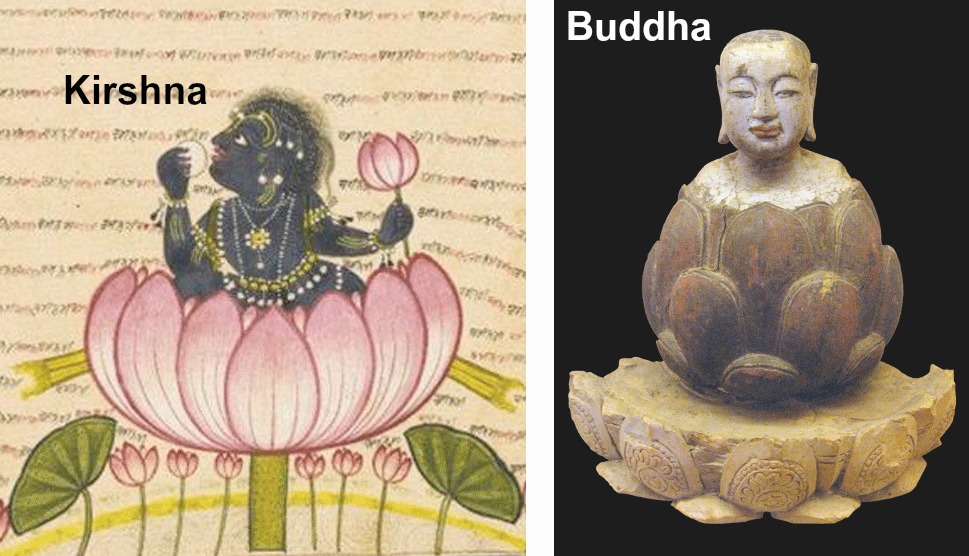 “Nor, again, do the Egyptians believe that the sun rises a new-born babe from the lotus, but they portray the rising of the sun in this manner to indicate allegorically the enkindling of the sun from the waters.”