In thought experiments, love thought experiment refers to the thought experiment according to which a person, simultaneously in love with two or more people, and or, conversely, a person with two or more people simultaneously in love with them, attempts to discern who or how to intelligently “choose” whom to marry, based the laws, principles, and or prediction logic of affinity chemistry, physical chemistry, and or chemical thermodynamics, the result of which new insights and truths are gained into and about the nature and realities of the human condition.

In the middle of 1808, German polymath Johann Goethe, a few months before he met Napoleon (Oct 2), he had started writing a story called “The Renouncers”, which, according to one of Goethe’s assistants, was about a hero simultaneously in love with four women; the synopsis of which, in Goethe’s view, was that:

“Each in her own way is lovable; whichever one he is drawn to in the mood of the moment, she alone is lovable.”

The solution to the problem he found is derived from Newton’s 1718 last and final “Query 31”, wherein he stated:

From this, Goethe gleaned the view that, just as there is only, after all, “one nature”, these chemical natures have to apply to human affairs, according to which:

Goethe took it up again early the next year, after which the tale ballooned into a novel, progressed quickly, and before the end of the year (Oct 3, 1809) (see: Goethe timeline) it was in print under the enigmatic title Elective Affinities, a physical chemistry based treatise on love, relationships, and human interactions viewed purely as affinity reactions or chemical reactions. [1] In her summary of the circa 1849 long poem Amours de Voyage of English poet Arthur Clough, American literature professor Stefanie Markovits summarizes the innate thought experiment nature of Goethe’s 1809 physical chemistry based novella Elective Affinities (Die Wahlverwandtschaften): [3]

“Why, Claude wonders, should he fall for Mary rather than some other girl who would be equally suitable and equally attractive? Is love just the chance collision of two people who are, as the saying goes, in the right place at the right time—a kind of lucky hit in the dark? ‘Juxtaposition’, within the frame of Amours, fits into two sets of metaphors. The first of these is chemical and has to do with the concept of elective affinities: the idea that elements having inherent tendencies to form combinations and that they will combine and recombine according to these tendencies when placed in solution with each other. Goethe had explored the social and sexual implications of the concept in his novel Die Wahlverwandtschaften (1809), a work that obviously influenced Clough’s reflections on the subject of Amours. [4]. Goethe’s novel is really more of a thought experiment about enlightenment than anything else. In it, a hyperrational couple invite into their home a pair of outsiders, only to discover that the foreign elements bring with them dangerous forces of elective affinity. The four main characters find themselves reshuffling their relations according to these affinities, and the results are devastating.”

Markovits goes on to state that the point that Goethe made—and that Clough worries about—is that there is nothing genuinely elective about elective affinities: we have no choice in these matters, other than the choice to oppose our inherent passions. She also states that Clough interjected further on this issue, in regards to “mechanical ethics”, the teaching of behaviors, and passions, in his “1849 (Roma) Notebook”.

Helmholtz | Affinity → Free energy
In 1882, with the publication of German physicist Hermann Helmholtz' treatise "On the Thermodynamics of Chemical Processes", affinity chemistry—the basis of Goethe's thought experiment—was supplanted or rather upgraded to the more robust science of chemical thermodynamics; subsequently, love thought experiments, in the years following, owing to the Goethe-Helmholtz equation, which equates the force of "affinity" to the change in "free energy", tended to be free energy or thermodynamic based, as outlined below in the case of Henry Adams, who believed himself to be a molecule like free energy determined "phase" (1909) or Libb Thims who believed himself to be a free energy determined 26-element molecule (1995).

In Jan 1881, Henry Adams met the 24-year-old Elizabeth Cameron, for the first time, in the drawing room of the house of John Hay can Clara Hay. On 19 May 1883, when Cameron and her husband departed for Europe, Adams initiated a correspondence with Cameron, expressing unhappiness with her departure and his longing for her return.

On 7 Dec 1884, exactly one year before the suicide of Clover Adams, Henry Adams wrote to Cameron:

“I shall dedicate my next poem to you. I shall have you carved over the arch of my stone doorway. I shall publish your volume of extracts with your portrait on the title page. None of these methods can fully express the extent to which I am yours.”

On 12 Apr 1885, Adams, while on an extended work stay-over in Washington, wrote Clover the following:

“Social chemistry—the mutual attraction of equivalent human molecules—is a science yet to be created, for the fact is my daily study and only satisfaction in life.”

It would seem, here, to be the case, speculatively speaking, that the three human molecules Adams had in mind in this statement, subsequently, would have been himself, his side love affair (or interest) Elizabeth Cameron, and his wife Clover Adams.

On 13 Apr 1885, Clover’s father died, and this was said to have initiated a period of mourning which evolved into mental depression from which she did not recover.

On 4 Dec 1885, two days before her suicide by cyanide (Dec 6), Clover Adams, visited Elizabeth Cameron, who was then three-months pregnant.

On 6 Dec 1885, Clover died by suicide via swallowing potassium cyanide.

On 29 Sep 1908, Adams wrote Cameron the following telling insight about his encounter with the chemical thermodynamics equations of Willard Gibbs:

Here, we see the affinity chemistry belief system (or belief state) to chemical thermodynamics belief system (or belief state) transition occurring, according to which, whereas Goethe believed himself to be some type of animated chemical governed by the forces of chemical affinity, Adams, alternatively albeit equivalently (in science upgrade terms), believed himself to be a both a "molecule" (1885) and "phase" (1908) or "equilibrium" defined by the chemical thermodynamics of Willard Gibbs.

In circa 1992-1993, American electrochemical engineer Libb Thims, the modern intellectual embodiment in mindset of Goethe + Adams + Pareto, in regards to human chemistry, in an attempt to figure out how to go about choosing who to marry (as this is supposed to be a step, according to cultural precedence, in the colloquial standard model of existence), as a freshman pre-engineering student, Thims made an excel-style spread sheet table of the top nineteen girlfriends, whom he could potentially marry, listing each person on the horizontal and listing a range of point ranked attributes, qualities, or factors on the vertical, such as “grandmother would like her”, spontaneity, fun factor, physical attraction factors, mental attraction factors, repulsive factors, etc., in an attempt to get a numerical "marriage quality value" for each girlfriend:

The resulting solutions, however, did not seem to intuitively make any sense.

In 1995, Thims began to muse about how this would be done chemical thermodynamically; even nearing the point of asking the question in his chemical engineering thermodynamics class. It would be a full seven years (2001) before he could figure out the nuts and bolts of how this could be quantified via enthalpy and entropy determinants (see: history). The following is a section of the circa 1995 "Thims thought experiment", according to which American chemical engineering student Libb Thims conceptualized his top 19 marriage-potential girlfriends as each having a reaction "potential" quantified by the Lewis inequality: ΔG < 0, analogous to what Goethe conceptualized in 1796 via affinities (see: Goethe-Helmholtz equation: A = -ΔG), according to which the discerning human chemist should theoretically be able to "predict" the most-favored human chemical reaction (see: HCR theory) of a given set of potential reactions: 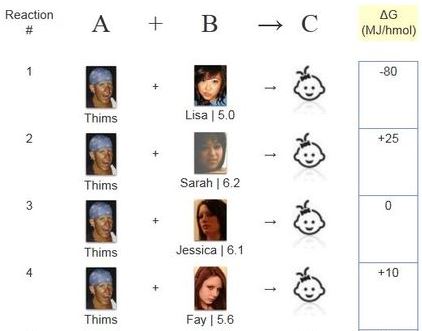 In this period, and the years to follow, Thims began to seek a thermodynamic understanding of the human existence process, especially as thermodynamics relates to mate selection and the nature of love; and sometime shortly thereafter, Thims discovered American evolutionary psychologist David Buss' newly-published 1994 book The Evolution of Desire, containing the results of a robust study on mate selection of 10,000 people of all ages from thirty-seven cultures worldwide, which presented a rather eye-opening and straight-forward look at the nuts and bolts of mate selection, in regards to what specific factors affect sexual attractiveness and sexual repulsiveness, from both the male and female perspective. Some of the first products of this efforts include the 2005 Journal of Human Thermodynamics, the 2007 textbook Human Chemistry, and the 2008 The Human Molecule, to name a few. 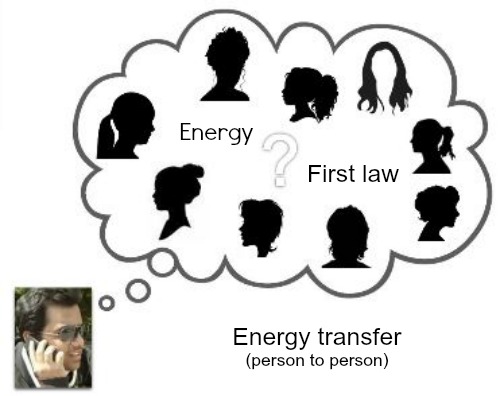 Thims, shortly thereafter, contacted Regalla and Vedula, suggesting they attempt to expand on their video story line into the form a more rigorous journal article, after which, in May 2012, they published an article entitled “A Strange Thing Called Love: in View of Chemical Thermodynamics”, in Journal of Human Thermodynamics, wherein they outlined their take on the chemical thermodynamics of love, employing Thims-Pati style reaction mechanisms:

to explain human bonding as a reaction, commenting at the end that:

“A video was made by the authors on the same concept with the title as “A strange thing called love”. The plot of this video is that a man falls in love with nine girls and that day comes when he is supposed to make a decision on choosing ‘the one’. Surprisingly in the early 1800s, Johann Goethe published a book named Elective Affinities based on a similar concept of love and marriage relations among two couples. It is a pure coincidence and the current authors actually didn’t know about it until they started preparing this article.”