In chemistry, mechanism is the step-by-step sequence of elementary reactions by which overall chemical change occurs. [1] A reaction mechanism, said another way, is the way in which a particular chemical reaction occurs, described in terms of the steps involved. [2]

“Mechanism, which counts among its progenitors and partisans Democritus, Descartes, Hobbes, Locke, Berkeley, and Hume, has at its root the engineer’s model or machine, with its atomistic and manipulatable parts.”

In a mechanism, each step is characterized by a number of factors, such the reaction time in a single step, a specific movement or exchange, energy, entropy, and Gibbs free energy changes, among other factors. A mechanism describes in detail exactly what takes place at each stage of a chemical transformation. It describes the transition state and which bonds are broken, and in what order, which bonds are formed and in what order, and what the relative rates of the steps are. A complete mechanism must also account for all reactants used, the function of a catalyst, stereochemistry, as well as all products formed and the amount each reactant and product.

Cullen's most prominent student Scottish physicist and chemist Joseph Black also made mechanism-like reaction diagrams. These affinity tables and reaction diagrams, in turn, found their largest expression in the 1775 so-called "affinity reaction diagrams" of Swedish chemist Torbern Bergman, the first of which is shown below: 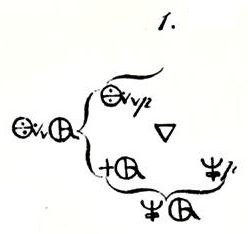 Bergman also, was the one who introduced the now-standard English alphabet notation, A, B, C, aB, etc., notion for generic single and bonded, chemical species. These Bergman reaction diagrams, over the next century, through a slow gradual process, eventually began to be written in the standard horizontal reactants convert to products notation:

In 1884, Dutch physical chemist Jacobus van't Hoff introduced the two-way arrow to signify the forward backward nature of reactions until equilibrium is reached:

In 1903, Scottish chemist Arthur Lapworth proposed one of the first reaction mechanisms, namely that for benzoin condensation, as shown below, where the proton transfers occur at (i) and (ii): [3]

Chnopsology | Biology
The term ‘mechanism’ in biology (chnopsology), just as in chemistry, according to English experimental biologist James Johnstone, refers to the motions and configurations of material particles, namely the atoms and molecules of a system which exist, move, and from configurations, in a physical chemical system in space and time. [9]

The first to use thermodynamics to describe life (animate structure) mechanistically was French biologist Stéphane Leduc who in 1911 published a 197-page treatise on the mechanism of life, wherein, in his own words, he “endeavored to give as much of the science of energetics as can be treated without the use of formula; the conception of entropy and Carnot’s law of thermodynamics” to the explanation of the mechanism of life. He states, for instance, “a living being [is] a store of potential energy, to be set free by external stimulus.” [8]

The second to describe “mechanism” in relation to interactions between living entities, on the model of chemical mechanism, was English experimental biologist James Johnstone, beginning in 1914 and culminating with his 1921 book The Mechanism of Life in Relation to Modern Physical Theory. [4] Johnstone’s work later stimulated ideas on predator-prey mechanism as described in 1922 articles “Contribution to the Energetics of Evolution” and “Natural Selection as a Physical Principle” American physical chemist and mathematician Alfred Lotka. [5]

In 1892, German physicist Karl Pearson gave the following opening statement to his chapter on life in his book The Grammar of Science:

“The object of our Grammar so far has been to investigate the radical concepts of physics, the basis of that ‘dead’ mechanism to which science is popularly supposed to reduce the universe.”

Here we see Pearson unknowingly applying religio-mythology concepts, namely the concepts of "life" and "death", which are not concepts found in the corpus of hard science, to the question of mechanism, namely the agglomeration of the religio-mythology science blended term "dead mechanism", as apposed to "living mechanism". Pearson, prior to this, in his 1885 “Matter and Soul” lecture, used the dead mechanism argument to discredit the notions of "consciousness" and to some extent "life". [11]

In human chemistry, the concept of chemical mechanism has a long history tracing back to the 1796 theories of German polyintellect Johann Goethe, and after hims including Lawrence Henderson, Christopher Hirata, to name a few.

In 2007, American electrochemical engineer Libb Thims used mechanist theory and depictions of mechanisms in the discussions of human chemical reactions occurring between “human molecules” (people), A or B, such as in the processes of relationship formation, divorce, or friendship rearrangement, etc., via its use in human collision theory, human molecular orbital theory, transition state theory, etc. [6] To cite one example, the classic model of reaction mechanism between two proteins R and L:


The first step in the reaction, R + L, brings the two protein molecules into close proximity, resulting in the first ‘macrocollision’ and yielding the encounter complex: R ∙∙∙ L. In the second step, short range electrostatic effects result in a well-oriented conformation called the ‘transition state’ or R – L. At this point, orbital overlap effects are not yet significant factors. The last step of the binding process is the latter stage transition from the favorable intermediates to the bound state unit RL. This is a process of induced fit, limited by a rate constant, which requires structural rearrangements overcoming mostly enthalpic energy barriers.

Thims explained this, in the human molecular perspective, such as if R and L were two human molecules, A and B, from one point of view, as an energetic analog to American psychologist John Money’s 1980 love map theory, but translated in the form of the modern drug-receptor thermodynamic conception of “free energy maps”, which corresponds to the sensory forces that guide the orientation, alignment, and development of a person’s life in proportion to measurements of neighboring ‘locking potentials’ of human molecules in close proximity. In this sense, in human life, forces or locking potentials drive the search leading to high-affinity binding of humans to other humans. [7]

“Pan-mechanism is not simply the claim that being is composed entirely of machines, but that all interactions are machinic interactions.”