In hmolscience, molecular evolution table shows the linear build up of atomic structure in animate molecular structures in time, via evolution or synthesis, over the course of the last 13.7 billion years of universal activity from sub-atomic particles, to atoms, to hydrogen molecules, to DNA, to bacteria molecules, to human molecules, etc.

In 2005, Thims, in online format, at HumanThermodynamics.com, made the first "molecular evolution table". [1]

In 2007, Thims, in his "Molecular Evolution" chapter, of his Human Chemistry book, published in the following version of the molecular evolution table (albeit without color illustrations), YAB = years after bang, BYA = billion years ago, MYA = million years ago, the shorthand "E" used in formula means to the power of 10, e.g. 3E5 = 3 x 10^5 or CE22 = 10^22 carbon atoms:: [9] 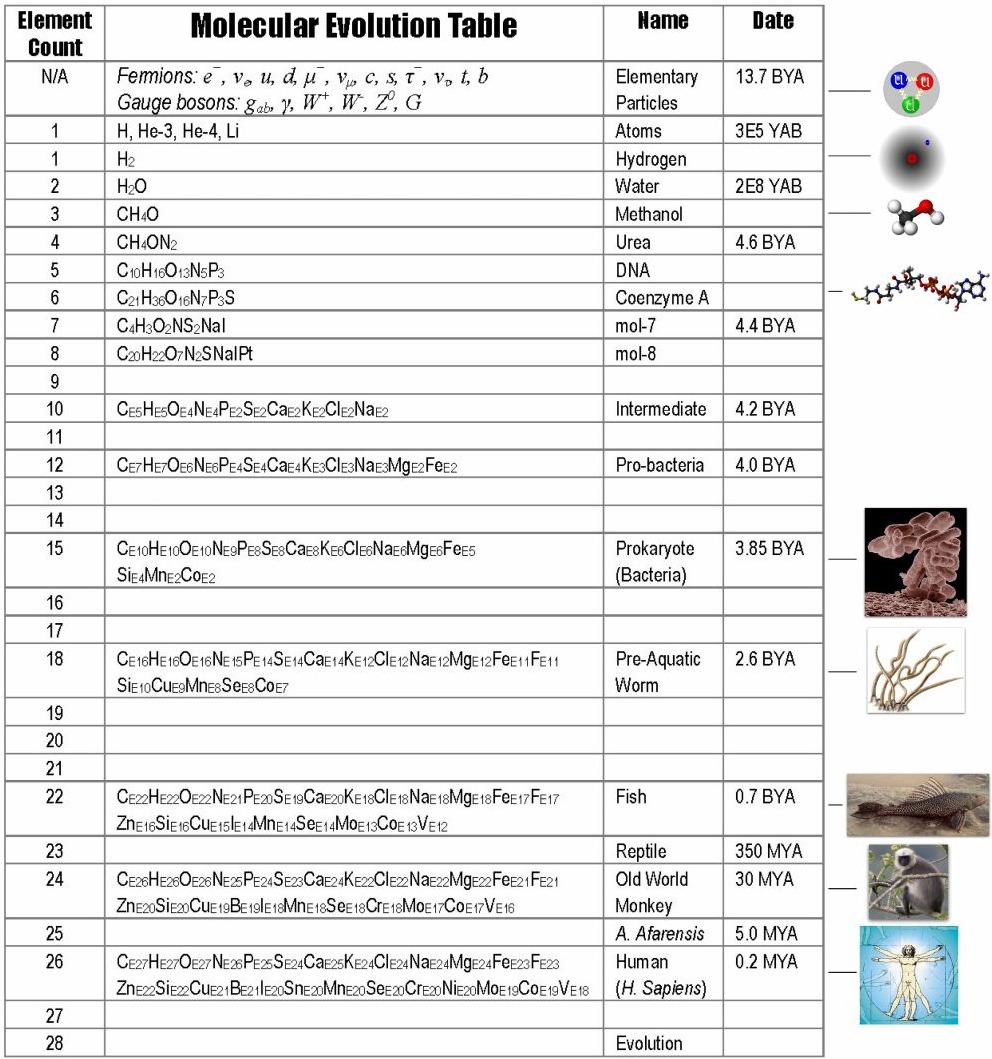 In 2008, Thims made poster board display-sized version of the molecular evolution table, with color illustrations as shown above; and also made the “Evolution (Advanced View)” (Ѻ), shown below (right), using this poster.

In 2009, Thims made an expanded-step version of this molecular evolution table into an online sideways-scrollable “evolution timeline” and a video-version (Ѻ), shown below (right), scrolled to the lyrics of Sam Sparro’s agnostic-about evolution 2008 dance song “Black and Gold” (Ѻ)(Ѻ).

In 2010, Thims made a 20-foot paper version of the evolution timeline, shown below, which he debuted following a lecture by chemical engineer Ted Erickson, at the Illinois Institute of Technology:

In this photo, we see Erickson pointing to the point at which he believed that "sentience" or "awareness" arose, which occurred attempting following an attempt to argue with Libb Thims and physicist David Gore, that Planck length particles have consciousness.

See also: Great chain of being

In an 1871 letter written by English naturalist Charles Darwin to English botanist Joseph Hooker, Darwin made the suggestion that:

“[The original spark of life may have begun in] a warm little pond, with all sorts of ammonia and phosphoric salts, lights, heat, electricity, etc. present, so that a protein compound was chemically formed ready to undergo still more complex changes.”

In this sense, all life is postulated to be a descendent from a protein compound, formed in a heated pond many years ago. In modern terms, as fossil records indicate that bacteria existed on the surface of the earth 3.85 billion years ago, an unsolved debate of sorts or puzzle exists as to what life-forms came before bacteria?

A single bacterium, however, is in itself a very large animated molecule, such as the colony or cluster of 20-30 Escherichia coli bacterial units (bacteria molecules) attached to a substrate, as pictured adjacent, comprised of about 10 billion carbon, hydrogen, and oxygen atoms, among twelve other atom types, e.g. nitrogen, phosphorous, sodium, etc., in various quantities. To form such a large molecule, form a chemical point of view, an assemble-type “chemical reaction” would be needed. This assumes that there were “reactants” that went into the formation of the first bacteria unit (product), and that there were prior energetically-coupled connective reaction mechanisms prior to the bacterial reactions.

In contrast to this mechanism view, the majority of modern scientists remain in the dark as to the fictional dichotomy between life and non-life or animate and inanimate. At the Sep 2000, ‘What is Life?’ conference, held in Modena, Italy, attended by Robert Hazen and about a hundred scientists, philosophers, and theologians, for instance, there was no consensus as to what the first form of life was. In particular, regarding this question, a debate erupted between the scientists. One expert on lipid molecules argued that life began with the formation of the first semipermeable lipid membrane, a structure that encases cells. A noted metabolism researcher argued that life began with the first metabolic cycle, thus giving cells the power to convert energy and atoms into useful molecules. The molecular biologists were adamant that that the first living entity must have been an RNA-like genetic system that carried and duplicated biological information. One mineralogist even threw out the wild card that the first life was a self-replicating mineral.

In contrast to this view, the "molecule evolution table approach", i.e. a table of the ancestors (with molecular formulas) of the human being, assumes continuity in the chemical mechanism (or mechanism) involved between the assembly of the first hydrogen atoms in the universe, 13.7 billion years ago, and later formation of the first human molecule (150,000 years ago), i.e. the first anatomically correct modern human. This table is shown below:

Discussion
In 2005, an observation in reference to the molecular evolution table came from Italian physician Sebastiano Venturi, an expert in iodine deficiency, metabolism, and evolution research. Venturi notes that, according to his iodine research, the incorporation of atomic iodine into biological molecular structure, such as iodocarbons, may have began in Cyanobacteria, as a primitive antioxidant, probably about 3.5 BYA. The current table, by contrast, does not list iodine in the molecular formula for bacteria. In short, Venturi agrees with the structure of the molecular evolution, he only points out that further research will be needed to calculate more exact formulas and to find more exact elemental incorporation rates chronologically.

In 2008, Russian physical chemist Georgi Gladyshev argued that his principle of substance stability finds proof in Thims’ molecular evolution table. [6] Specifically, in 1978, Gladyshev wrote “after the concluding stages of general evolution the concentration of free energy occurs not only owing to the growth of the chemical component G j-m (molecular) and higher order components, but also owing to the G-j at (atomic) component (as well as to other components not considered here).” [2] In these early formulations of the principle of substance stability, Gladyshev understood, from the viewpoint of hierarchical thermodynamics, the importance of the atomic component (G j-at) for the understanding of direction of biological evolution. The chemical substances with heavy elements (metals), for instance, according to Gladyshev, have lower chemical thermodynamic stability and decompose (depredate) faster in the comparison of chemical substances with light elements. Examples include salts of organic acids (formiates, oxalates, many chelate compounds, carbonyls and so on). Publications on the stabilization of polymers by using of acceptors of oxygen which we generate from formic and oxalic salts corroborate these postulates. [5] The same situation, according to Gladyshev, should be found with the variation of isotope concentration of elements during ontogenesis and phylogenesis. [3] Likewise, the build up principle, Gladyshev states, should have correlation in the chemical and supramolecular stability of general organic chemistry. [4]

“Man is descended from a hairy, tailed quadruped, probably arboreal in its habits, and an inhabitant of the Old World. This creature, if its whole structure had been examined by a naturalist, would have been classed amongst the Quadrumana, as surely as the still more ancient progenitor of the Old and New World monkeys. The Quadrumana and all the higher mammals are probably derived from an ancient marsupial animal, and this through a long line of diversified forms, from some amphibian-like creature, and this again from some fish-like animal.”

“In order to have life you need water—which is a universal solvent—for reactions to take place, as well as carbon, which serves as the core atom of the information-carrying structural molecules of life. But you also need a lot more. Humans require about twenty-six essential elements; a bacteria about sixteen. The intermediate life forms are about between those two numbers. The problem is that not just any planetary body will be the source of all those chemical ingredients in the necessary forms and amounts.”