In nouns, occupation, a term synonymous with work, job, or vocation, is the activity in which one engages; the principle business of one’s state of existence. [1]

“Of the two sorts of money-making, one is a part of household management, the other retail trade, the former necessary and honorable, the latter a kind of exchange which is justly censured, for it is unnatural, and a mode by which men gain from one another. The most hated sort, and with the greatest reason, is usury, which makes a gain out of money itself, and not from the natural use of it. For money was intended to be used in exchange, but not to increase at interest. And this term usury, which means the birth of money from money, is applied to the breeding of money because the offspring resembles the parent. Wherefore of all modes of making money, that is the most unnatural.”

Occupation and sexual receptiveness
In circa 1993, American evolutionary psychologist David Buss and graduate student Jennifer Semmelroth, polled 213 college women, half of which (N=109) were asked how flattered the would feel by being persistently asked out on a date by various men, differing by occupation, shown below, the other half (N=104), were asked how upset they would feel by outright sexual proposition by various men, similarly differing by occupation, on a Likert scale of 7 being 'most upset' to 1 being 'least upset', the results of which are shown below: [3] 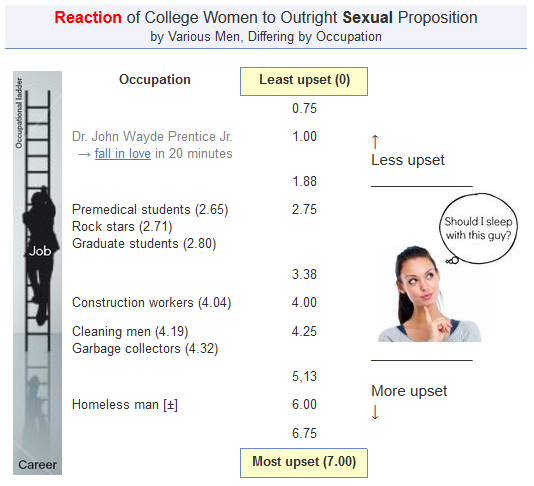 The above results, to note, of , with the guesstimated inclusion of the explicitly-designed occupationally-perfect idealized male Dr. John Wayde Prentice Jr., from the 1967 film Guess Who's Coming to Dinner and and an occupationless homeless man, and the general occupational role played by English-born American actory Cary Grant, whose tended to personify identities to the effect that "I pretended to be somebody I wanted to be and I finally became that person. Or he became me. Or we met at some point" resulting to the effect that "everyone wants to be Cary Grant—even I want to be Cary Grant": [7]

“A clergyman is one who feels himself called upon to live without work at the expense of the rascals who work to live.”